This page was initiated by Charles (Chase) Phillips in the summer of 2020 and is under development. Chase is a Sophomore in Mechanical Engineering at WSU, originally from the Tri-Cities. He undertook the responsibility of lead authoring this page out of a desire to educate those in the region, knowing that as a novice to this subject, he could state many of the problems in a way more accessible to the general residents and policymakers of the Pacific Northwest.

What is hydrogen? Where does it come from? How do we use it? These are a few of the questions that I hope to answer in this Hydrogen 101 series. This series is trying to inform people of all backgrounds about the many aspects of hydrogen, from the science behind it to the economic possibilities created. Although focused on the Pacific Northwest, the topics discussed in this series will be able to translate to many other locations. This series will continue to grow and expand as my knowledge of hydrogen does. I am taking the reader along my journey of learning about hydrogen. Hydrogen is too crucial to the sustainable and clean energy movement to be ignored. Hydrogen will play a significant role, and this series aims to help by getting the public involved and get new professionals in the field.

The Pacific Northwest’s abundant renewable energy and lack of fossil or battery resources are a likely combination to benefit from hydrogen production. Hydrogen — a storable, zero-carbon, electrofuel has the potential to reduce Washington’s $10B annual fossil fuel imports while increasing the value and revenue generated by our renewable energy producers. This Hydrogen 101 page is intended to provide an initial foundation of hydrogen information to set the stage for more advanced and targeted Hydrogen 201 discussions that are sector specific (e.g. aerospace, farming, logging, and maritime; among others). The end goal is for you to see a future for the Pacific Northwest where hydrogen forms a natural synergy with renewable electricity to solve most of our portable power needs.

Many people have some concept of what hydrogen is or how it could be used. They hear of hydrogen often enough online that it registers in their mind as something that may be important, but they often may not know why.

To discuss why hydrogen is so important, we first need to lay the groundwork of hydrogen. Hydrogen is often known as element one. It is the first element on the periodic table, comprising one proton and one electron in its most abundant state. There are other compositions (known as isotopes) of hydrogen, but for now, we will stick with the standard state. Many people will also note that hydrogen is in the water molecule. Water (H2O) has two hydrogen atoms, giving water unique properties that make water a very useful compound. Those that are interested in space would also note that our sun is made of hydrogen. Our sun’s immense energy is from the fusion of hydrogen into helium atoms under the massive pressure and heat. They may also say that hydrogen is the most abundant element in the universe, at 74% of known mass. Hydrogen is found everywhere, in vast quantities, and has excellent production and energy storage potential. 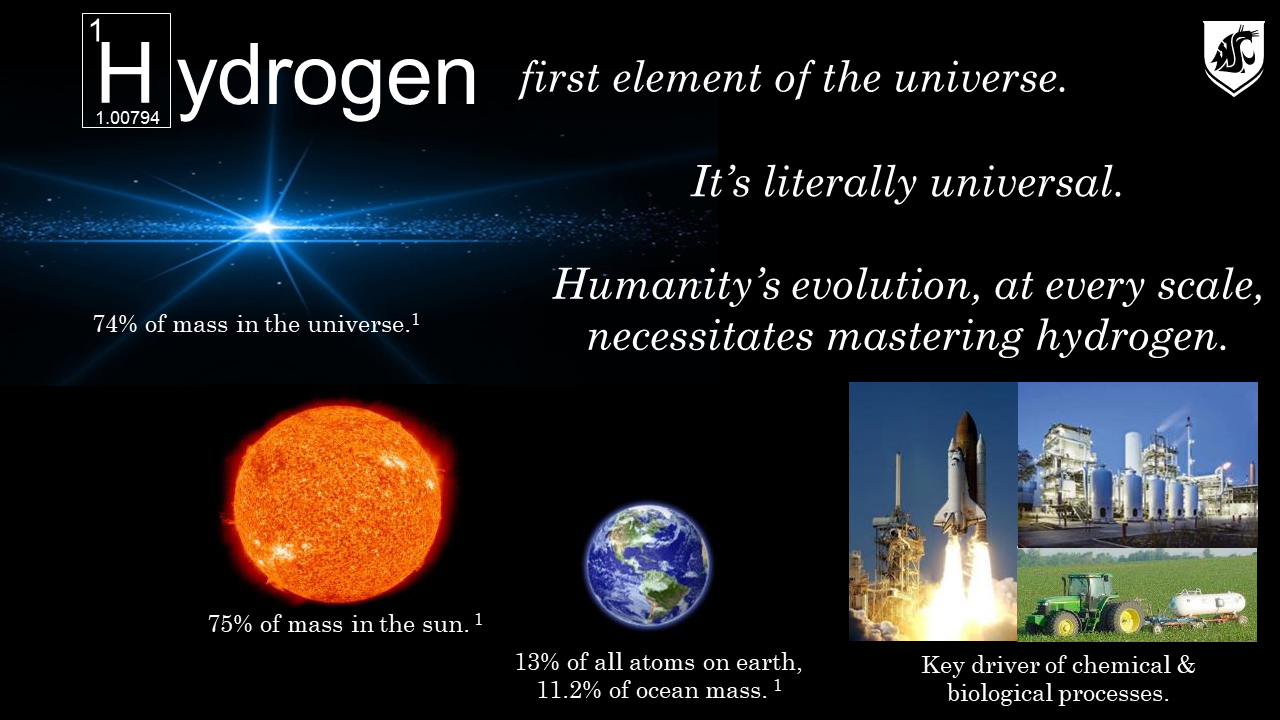 Although hydrogen is everywhere, it is often combined with other atoms into chemical compounds and seldom as free molecular hydrogen (with two atoms bonded together known as H2). Dr. Leachman often points out that the letters ‘ph’ you likely remember as the driver of chemical reactions are Latin for ‘pondus hydrogenii’ which translates as the hydrogen potential. Ph is key to biological functions in our bodies and in the cellular functions of most living organisms. Given this ubiquity at nearly every conceivable scale in the Universe, humanity’s evolution necessitates mastering hydrogen.

With the foundation of what hydrogen is, the next question some may ask is where does it come from? In the next section of this series, I will discuss the methods used to produce hydrogen.

The colors of hydrogen

The sounds of hydrogen

The shapes of hydrogen

The properties of hydrogen

Even though hydrogen is literally everywhere, in and around us, for hydrogen to be most useful for energy we must separate the hydrogen from other atoms and molecules into a pure form. In this section we’ll stick to the most common ways hydrogen can be produced and introduce a simple way to understand the quality or value of hydrogen produced from some sources. 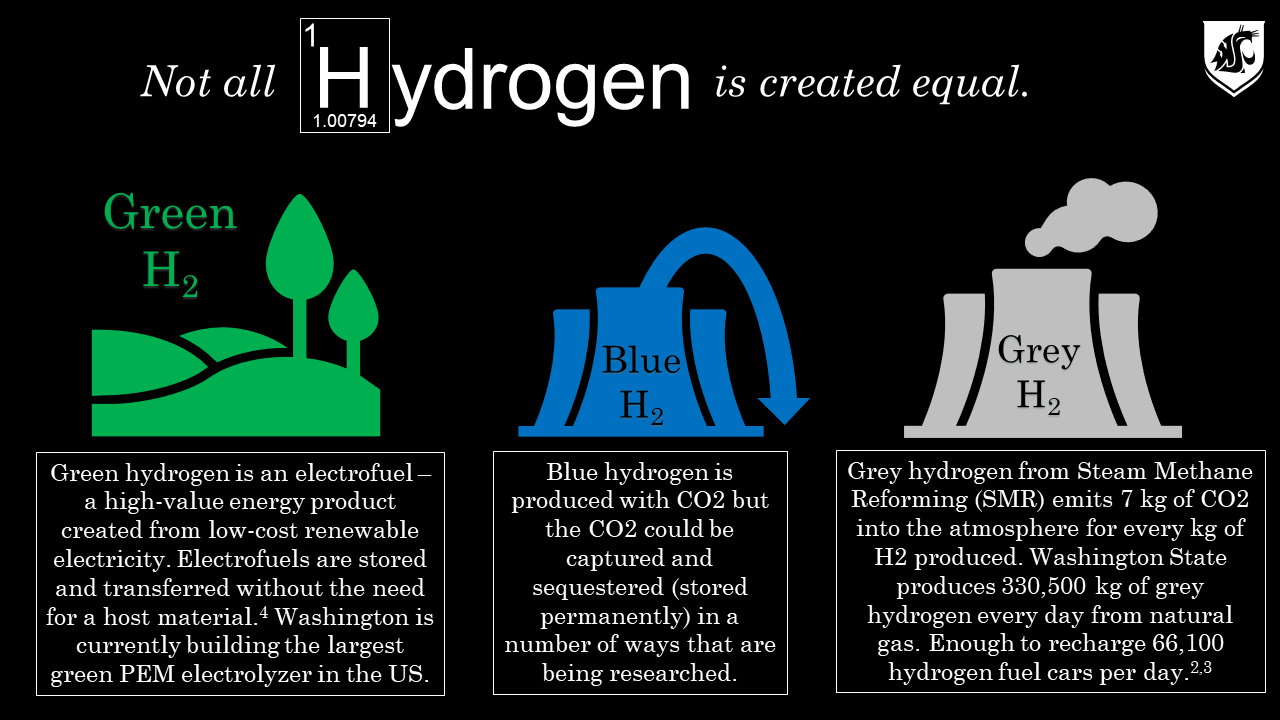 Thankfully, the ways we produce hydrogen are rapidly changing. Growing technologies for hydrogen use biomass or microorganisms. In biomass gasification and biomass-derived liquid reforming, biomass is converted to hydrogen in a controlled process using heat, steam, and oxygen without combustion. With the liquid reforming, the liquids are easier to transport than the traditional biomass. This technology shows promise, especially in the PNW and Palouse region. The Palouse/Columbia Basin in the PNW produces a large sum of the country’s agricultural products. All these products have excess biomass that could produce hydrogen, feeding back into the system as either fuel for machinery or fertilizer, but more on that later. The photobiological process uses microorganisms and sunlight to turn water into hydrogen. It is in the early stages of research, focusing on increasing the process’s rates and yields. Microbial biomass conversion also uses microorganisms, consuming and digesting biomass and releasing hydrogen without the need for sunlight. This process could be useful in wastewater treatment.

Two other hydrogen production processes utilize renewable energy. Thermochemical water splitting uses high temperatures to drive a series of reactions. The chemicals are reused in the reactions each time, creating a closed cycle that consumes only water, producing hydrogen and oxygen. Concentrated sunlight with mirrors or excess nuclear reactor energy supplies the heat. The other process is electrolysis, which is the one that HYPER uses in its research. It uses electricity to split water into hydrogen and oxygen in an electrolyzer. The electrolyzer consists of an anode and a cathode separated by an electrode. This process could be hooked up to a renewable energy plant to generate hydrogen off the excess energy. With the massive amounts of renewable energy in the PNW, this could be a great way to store the excess energy produced and use it when the energy output dips below the demand. 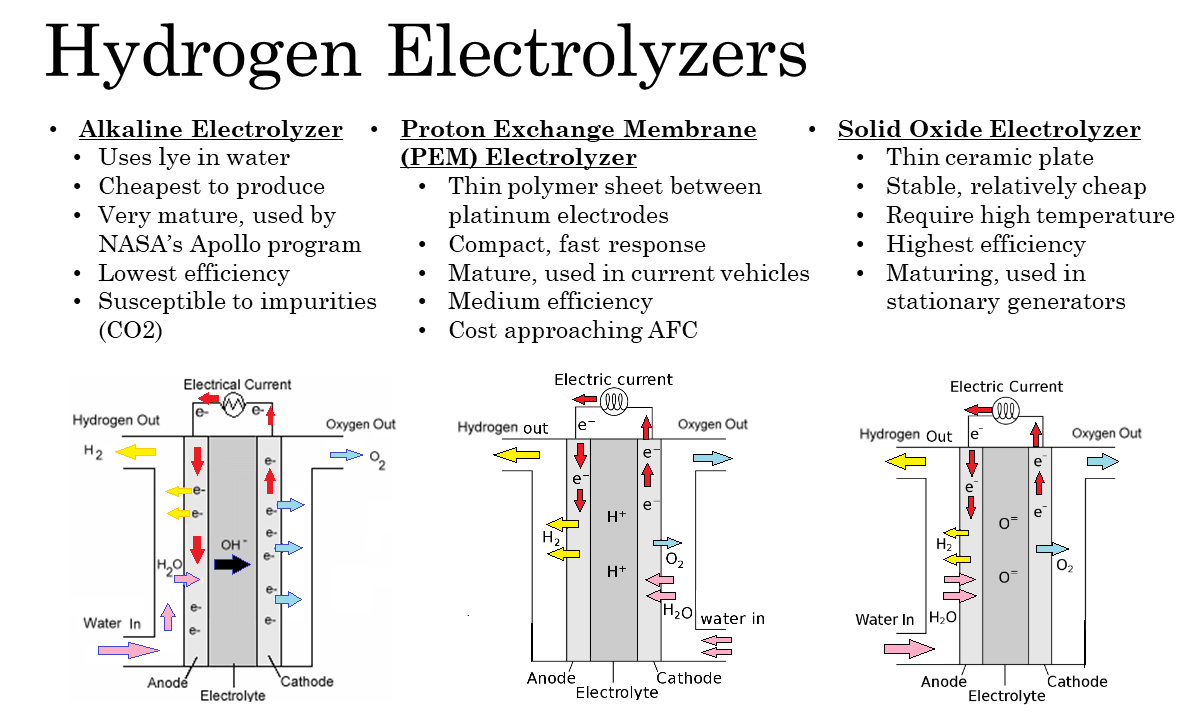 With the vast number of hydrogen sources covered, next, we will cover the uses of hydrogen.

Hydrogen’s number of uses only matches the number of its sources. Before we establish hydrogen’s applications, we first must discuss how we get energy from it and how we store it for its use.

Hydrogen fuel cells work like batteries, except they are refueled rather than recharged, and they don’t run down over time. In a fuel cell, the hydrogen is feed to the anode, and the air is fed to the cathode. A catalyst at the anode separates the hydrogen into protons and electrons. The electrons make the electrical current, and the protons combine with the oxygen at the cathode to make water and heat as byproducts. Now that we know how we get the energy from hydrogen; how do we store the hydrogen?

Hydrogen is remarkably like conventional batteries in how we get energy from it and that we use it to store the energy. However, there are some critical distinctions between batteries and hydrogen, and even between liquid and gas hydrogen. The two main differences are energy density and efficiency. Energy density is the amount of energy per unit mass. For example, 1 gallon of gasoline (about 2.9kg) has approximately the same energy as 1 kg of hydrogen. This means that gas is 2.9 times heavier than hydrogen for the same amount of energy. Hydrogen has a higher energy density than conventional batteries as well. However, with higher density comes lower efficiency. Energy efficiency is the ratio of the energy that comes out to the energy that goes in. Although hydrogen efficiency has increased over the years, it is not as high as batteries yet. The same relationship between efficiency and energy density can be shown between liquid and gas hydrogen as well. Gas hydrogen has a lower regular density than liquid hydrogen. This means that if you had 1 liter of gas hydrogen and 1 liter of liquid, the liquid hydrogen would have more hydrogen in the same space. This leads to smaller fuel tanks being needed for liquid hydrogen, or it can last much longer in the same size fuel tank. However, liquid hydrogen is far less efficient than gas hydrogen.

With the differences in energy density and efficiency covered, how can hydrogen be used? Since hydrogen has a higher density, it makes sense to use it in applications with long run times. Cross country transportation in semi-trucks or trains could benefit from the lighter fuel tanks and longer distance per refill that batteries cannot offer. Travel or transportation by plane or boat could also see significant benefits where battery alternatives are nearly impossible. Day to day cars and trucks could also see benefits of a hybrid model, using batteries for day to day travel, and hydrogen for those long family car trips. The agriculture and forestry industries could see a massive benefit from integrated hydrogen technology. Not only are the machines used for many hours of the day, requiring a long run time, but they also produce biomass waste that could be used to make the hydrogen as discussed in the above topic.

With how and why we should use hydrogen as a fuel source covered, the next question is, what are the challenges faced with hydrogen?

Authors note: Most of the information from this section came from Energy.gov and their hydrogen and fuel cell technologies office. Follow the link to read more about hydrogen production.

Testimony to the WA senate

A response to “Toyota vs tesla: can hydrogen fuel cell vehicles compete with electric vehicles?”

Seattle is waking up to hydrogen’s future in the Northwest

A hydrogen economy for Jefferson county

The potential for hydrogen fueled cars in Washington state

The potential of the hydrogen fueled farm

So just how dangerous is hydrogen fuel?

A proposal for large scale hydrogen liquefaction in the Pacific Northwest

The HOW of a hydrogen organized world

On the threshold of Washington states clean hydrogen economy

The $10B per year challenge facing WA state