Sadly, the closest fueling station to Seattle is in San Francisco. Let’s take this moment and think about Seattle’s commute and the zero-emission options. 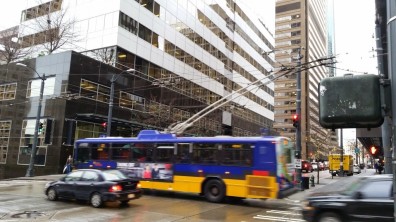 Downtown Seattle is extensively electrified for trolley buses. Aside from the mountain of copper it took to run the wires, that’s great for the environment, not so great for tourism or the pocket book. Electrification of just Seattle Metro Route 48 for electric trolleys is estimated to cost $363 million!! While that may give many sticker shock, operation of conventional hybrid buses is estimated at $345 million over a 30 year period. To put this into perspective, we could build over 700 of our winning hydrogen fuel stations with that amount of money. Which do you think will drive a bigger dent in our State’s fossil fuel use?

Granted, we still have technological hurdles to overcome for a viable hydrogen economy in Washington State. Generating hydrogen from our curtailed wind is an important first step. But when looking at the cost of the sustainable transportation alternatives, and the average distance of commute in the rapidly growing Puget Sound area, Washington State can hardly afford not to look at hydrogen as a primary transportation method in the near future.