To do this, we are developing a lightweight 3D-printed LH2 Tank. The ultimate goal: liquid hydrogen powered UAVs.

The current state-of-the-art in liquid cryogen storage technology is the vacuum jacketed dewar with multi-layer insulation (MLI) in between the inner and outer shells to slow the rate of radiation heat transfer. While shell materials typically consist of thin gauge stainless steel and aluminum, the mass fraction of cryogen to tank ranges from 6% for 1 kg tanks to 15% for 8 kg tanks [1]. Other storage technologies such as high pressure room temperature gas and metal hydrides provide gravimetric storage of up to 6% and 4%, respectively. The performance of current cryogen storage technologies is insufficient for small scale (<100 kg) flight applications, and thus requires a new evaluation of recent advances in materials and manufacturing technology that can be adopted into novel cryogen storage solutions.

Hydrogen has long been viewed as a competitive energy carrier in aerospace applications due to its high specific energy that is greater than any other fuel currently in use (e.g. 2.8x kerosene). Because mass is a primary design constraint for airborne vehicles, liquid hydrogen was the fuel of choice for early aircraft such as the Lockheed CL-400 Suntan and modern space plane concepts such as NASA’s National Aerospace Plane and the X-33 sub-orbital space plane. Unmanned aerial vehicles (UAV) are sophisticated platforms for conducting remote observation of weather phenomena, agricultural and forestry health monitoring, and fire tracking and observation. The UAV sector of NASA’s Aeronautics Research Mission Directorate has identified the need for electric power and propulsion development along with development of lightweight, long-life cryogenic propellant research [2]. Hurricane monitoring is of great importance to NASA which concluded that the multi-day flight duration afforded by PEM fuel cell and liquid hydrogen propulsion systems were compelling reasons to pursue development of these respective technologies for both heavier-than-air (HTA) and lighter-than-air (LTA) high altitude long endurance (HALE) vehicles [3].

While hydrogen is directly oxidized by combustion in most aerospace propulsion applications, its utility is expanded to other power generation sources such as proton exchange membrane (PEM) fuel cells. Additional benefits of hydrogen include non-toxicity, a fast dispersion rate that mitigates risk posed due to leaks, and multiple generation paths. These paths include both renewable and non-renewable sources including steam methane reformation, electrolysis, and biomass through gasification. However, engineering complications related to liquid hydrogen storage must be solved to achieve higher tank system gravimetric capacity, specific energy, and energy density than current storage technologies provide.

Due to the continuous demand of hydrogen gas for a fuel cell powered UAV, a higher boil-off rate compared to storage dewars is acceptable, permitting an increase in tank heat flux and a commensurate reduction in insulation. Advanced cooling systems for space satellites use the sensible heat from boiled cryogen vapor to cool radiation shields and decrease boil-off from the liquid hydrogen tank by a factor of 6.5 [4]. Therefore, a further reduction in insulation mass can be achieved by integrating vapor cooling into the sidewalls of the UAV fuel tank. By using low density polymers in lieu of metal, additional mass reduction is possible due to the low pressure of liquid hydrogen storage tanks (~30 psig) that do not require the higher tensile strength of metals. The low thermal conductivity of polymers, 20x less than stainless steel and 200x less than aluminum at 20K, provides an added benefit in terms of increased thermal performance. 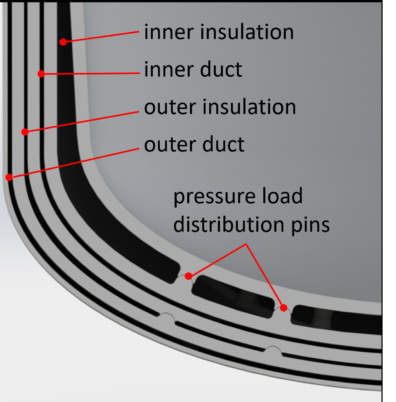 The objective of this innovative research is to demonstrate the cryogenic compatibility of 3D printed polymers that will not only benefit liquid hydrogen fueling solutions for UAVs, but also the manufacture of complex parts for medical devices and spacecraft components that require operation and strength in cryogenic environments. We will demonstrate this potential by building a small (5 L) liquid hydrogen tank for a UAV that incorporates vapor cooled channels into the tank walls to reduce heat load into the cryogen. The cold hydrogen vapor is then warmed to near ambient temperature as it moves along the outer tank walls. Integrating the heat exchanger eliminates the need for a discrete unit, which would otherwise reduce key performance metrics such as gravimetric capacity and specific energy of the storage system. We use selective laser sintering (SLS) of nylon blends to create the complex geometry necessary, along with aerogel based insulation materials, to achieve the required heat flux to maintain a boil-off rate sufficient for nominal cruise velocity. Power requirements above that necessary for nominal cruise engage a 10W heater in the tank to increase the boil-off rate. 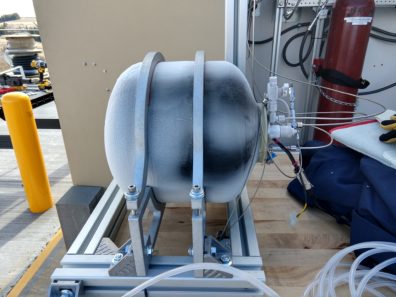 For Drew’s first project at HYPER, he designed a quick release mechanism for attachment of a hydrogen transfer line to the fueling interface of the Protium tank. This would later be added to a transfer line from the H2FLO liquefier into the Protium Tank. After careful thought and design, he decided to create a mechanism that could be completely 3D printed. Facilities and equipment at WSU allowed him to complete this task using a 3D printer capable of utilizing carbon fiber reinforced nylon filament along with continuous carbon fibers, Kevlar, and glass fiber reinforcements. This allowed him to create a mechanically sound device that was durable and would reduce weight. Following that, he took on the responsibility for the control system and data acquisition project known as the VCS cart. This involved designing a mobile testing station for liquid hydrogen fueling of the Protium Tank. The hardest part of this task was designing and building a junction box for the data acquisition hardware to relay information to the control station.

Previously a tank monitoring system was designed, but that board lacks necessary computing power, is too large, and doesn’t interface with some of the sensors/external components for the current project. So, Matthew’s task was to redesign the tank monitoring system to solve those problems. To make the board smaller, the new design primarily made use of surface-mount devices (SMDs), which could decrease the size of board to less than half the size of the previous design if needed. To solve the issue of computing power, the new system is based around the ATSAMD21G-18A which has 256kB of programming memory, 32kB of RAM, and is clocked at 48MHz. This is a significant upgrade from the previous design’s ATmega328P MCU which only had 32kB of programming memory, 2kB of RAM, and was clocked at 16MHz. In addition, the new system was designed to be capable of reading temperature data from three silicon diode temperature sensors (upgrade from two) with 16-bit resolution (upgrade from 8-bit), a pressure sensor, and can control two cartridge heaters (upgrade from one). Besides the upgrades to computing power and sensor interfacing, the new board has also been designed with versatility in mind. Another need for the tank project is a monitoring board that can read a superconductor-based fuel level gauge. Rather than designing a second board, the new system has been designed such that two temperature sensors may be replaced with the superconductor gauge.

Justin’s senior thesis project involved making a way to determine the level of liquid hydrogen in a tank. Right now, no commercial systems exist to measure the fill level in a liquid hydrogen tank. He was given prototype models and a fabrication system that were used in previous iteration, and looked to expand upon what he was given. Updates included looking for ways to decrease material spillage during epoxy process, updating code to better control the nichrome wrap, and building a wire straightener to assist in the fabrication process. The hardest part of this project was developing a modular seal system for the lead wires. At least 40 wires are needed to get into the low pressure dewar, and the use of epoxy is not wanted. Instead, a welded hermetic connector was utilized having the wire soldered to one end, and a matching female plug goes to the control board. 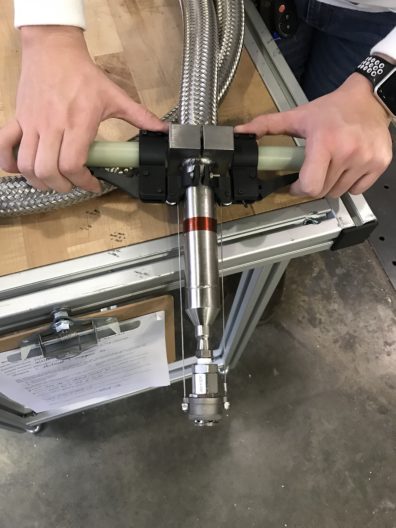 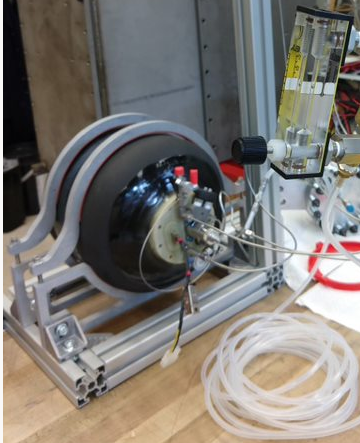 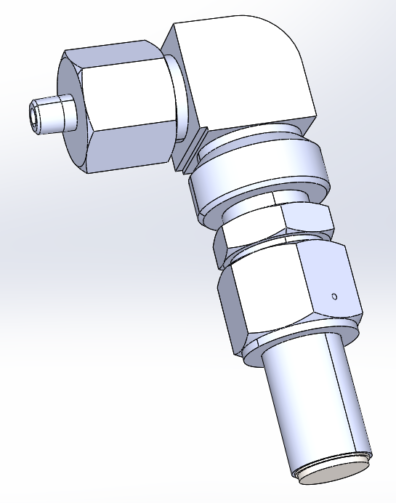 Our mission: to build the first university demonstrated Unmanned Aerial System (UAS) utilizing liquid hydrogen as fuel. Genii UAS is the system that resulted. Liquid hydrogen UAS have numerous humanitarian applications, as they are ideal for crop, fire, and weather monitoring; search and rescue; and communications. The team planned to use Genii for UAS research and development.

The Genii test platform was designed to be versatile and to exhibit stable and predicable flight over a variety of conditions. As a prototype and proof of concept, Genii was required fly safely and reliably. Utilizing a Horizon H – 1000 fuel cell and a 8.5L liquid hydrogen tank, Genii had sufficient power loading and endurance to fly safely and take off under fuel cell power alone.

Although at the time of completion of the project the necessary regulations at WSU and the FAA were not in place to allow us to flight test the full hydrogen system, all aspects of the aircraft were tested successfully. Fourteen flights proved the airframe, electric propulsion, and guidance systems were working beautifully, and extensive ground testing and characterization of the hydrogen systems showed the fuel cell hydrogen powertrain was up to the task.

Despite this setback at the end of the project, the project delivered a positive outcome for the lab in several respects: