Walkie talkie chatter filled the air, adding further buzzing to the air of excitement. We gazed in wonder as the project we had spent so long building, despite all odds, lifted from the runway. With little funding, intense scrutiny due to flight regulations, and hundreds of hours of intense work, Genii was a success!

Fast forward six years and we are discussing funding with Patty Murray to fund our very own outdoor research facility to not only continue the research Genii started, but to revolutionize the future of hydrogen fuel. Now, with the help of Senator Murray, the DOE, and the DOD, HYPER has realized this vision.

The greatest hurdle for hydrogen fuel is the infrastructure.  Every major car manufacturer has built or is designing a fuel cell vehicle.  Yet there are only a handful of refueling stations in the United States.  None of them are in the state of Washington or its neighbor states: Idaho and Oregon.

The problem is that creating fuel-worthy hydrogen is more complicated than just making hydrogen gas.  At ambient pressure, hydrogen takes up a lot of space.  5kg of hydrogen (which contains about the same energy as a tank of gas) would take up 60 cubic meters (2000 cubic feet), more than the volume of 20 cars!  To solve this, hydrogen is compressed so that it will take up less space.  The DOE recommends 700 bar as the recommended pressure for refueling, which takes up about 1/8th of a cubic meter (4.5 cubic feet).  For comparison, a household air compressor may only reach 6 bar.  Current refueling stations use large hydrogen compressors to achieve this pressure.  They are expensive and break often.

But there is another option.  Here at Washington State University, a new method, called cryogenic thermal compression, is being tested by students.  This avoids the expensive compressor and may drop the cost of hydrogen fuel significantly.  It can even dispense liquid hydrogen with minor modifications.  Soon, we will have the first refueling station in Washington State.

When a liquid boils, it tends to expand.  But if the liquid is sealed in a container where the volume can’t change, it will build up pressure instead.  That is the basic idea behind cryogenic thermal compression.  We take hydrogen gas, cool it until it liquefies, then seal it in a container and allow it to boil off.  Once it has finished boiling, it will reach a pressure far greater than the 700 bar we need to refuel.  By using this method, our only need for compression is to run the cooling cycle.  This requires less than 100 bar.

This method does not come without its own difficulties.  Cooling anything to liquid hydrogen temperatures is difficult, especially on an industrial scale.  At atmospheric pressure, hydrogen becomes a liquid at 20 Kelvin (-250°C, -420°F).  We can cool it most of the way with liquid nitrogen (which is cheap because it is a byproduct of oxygen purification).  But to get the final cooling, we need to be more creative.  Current cycles use throttle valves or expansion turbines.  But throttles only work in certain temperature ranges and expansion turbines are difficult to engineer for such low temperatures.  So we are researching the use of a Heisenberg Vortex Tube.

The Heisenberg Vortex Tube (also known as the Ranque-Hilsch vortex tube or simply, vortex tube) is a device which takes an inlet gas and separates it into two streams: one which is hotter than the incoming gas and one that is colder.  By controlling how much of the gas goes out either end, the cooling power can be adjusted.  Vortex tubes work at any temperature and require no moving parts.

Note: There is a great need to do further research on cryogenic thermal compression as it is still unproven as an approach.

Heat Exchangers: A counter-flow, parallel-tube-type heat exchanger was designed using EES (Engineering Equation Solver).  This was built and tested for performance.  It achieved an effectiveness of 91-97% at liquid nitrogen temperatures.  It should be higher at liquid hydrogen temperatures.

Gas Boosters: Although we don’t need as high of a pressure as current refueling stations, we still need a compressor.  From older projects at WSU, we have inherited two Haskel gas boosters.  These use compressed air at 90psi to compress another gas to a much higher pressure.  One of them has been pressure tested.

Vortex Tube: Vortex tubes are continuing to be modeled and improved. 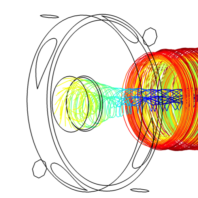 Dewar: A 250L liquid hydrogen container has been purchased to contain our product.  A special flange has been designed and built for mounting on all of our attachments.

Purifier: An improvised hydrogen gas purifier has been constructed and tested.  It makes use of liquid nitrogen.  This is to decrease the temperature so that any gaseous contaminants (nitrogen, CO, CO2, etc.) will liquefy and fall out of the gas, improving purity.

3D Printed Micro Liquid Hydrogen Tank: A miniature liquid hydrogen tank has been developed which can be 3D printed.  This allows easy transport of fuel for small vehicles such as drones. 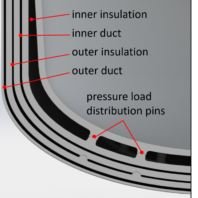 In 2014 the US Department of Energy announced the H-Prize — a $1M award competition to build a low cost hydrogen refueling station for a community or home. Dubbed H2-Flo after WSU’s late President Elson Floyd (known as Eflo), WSU was the only university, and one of six initial teams to enter into the competition and began a crowdfunding campaign that amassed over $100k in support from the M.J. Murdock Charitable Trust, the Washington Research Foundation, and WSU alumni and friends.

These funds helped support the summer student teams in 2015 and 2016 to begin work on the project. Since no liquid hydrogen is available in the region we had to produce our own and purchased the big dewar and white container to house the liquefier and compression equipment.

Our design for a low-cost, modular, drop-in refueling station took the grand prize.  Our approach was to deliver liquid hydrogen to the site on tankers, where our method of cryogenic thermal compression would deliver hydrogen gas at the required pressure to the consumer.  Our system was designed to be between 1/4 and 1/8 the cost of current hydrogen refueling stations, lowering the barrier to construction.  All of the equipment would fit inside of a standard 40-foot shipping container and could be installed in any location in 24 hours.  The fuel cost was expected to be $9.62/kg, or about 16 cents per mile when used in a hydrogen-vehicle in 2014.  A refuel should take less than 5 minutes, comparable to refueling a gasoline or diesel car. 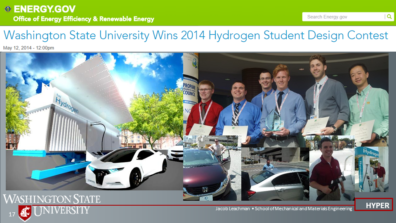 This victory paved the way for further research into hydrogen refueling.  We are currently working on a second station design which involves the same shipping-container base design and cryogenic thermal compression.  But this design involves making hydrogen and liquefying it on the spot.  This eliminates the need for refueling tankers and allows fuel-grade hydrogen to be produced and dispensed anywhere in the world.

On May 11th, 2015 at 3:00 pm a team of 8 took on the task of creating a lab space ideal for the research and development of small-modular hydrogen liquefaction. The space (photos seen below) was to accomplish three primary goals: provide an area ideal for experimentation and research, encourage heuristic thinking in order to overcome any challenge that may arise, and promote the air of professionalism necessary to accomplish something new. With these goals always in sight the process to accomplish them began. 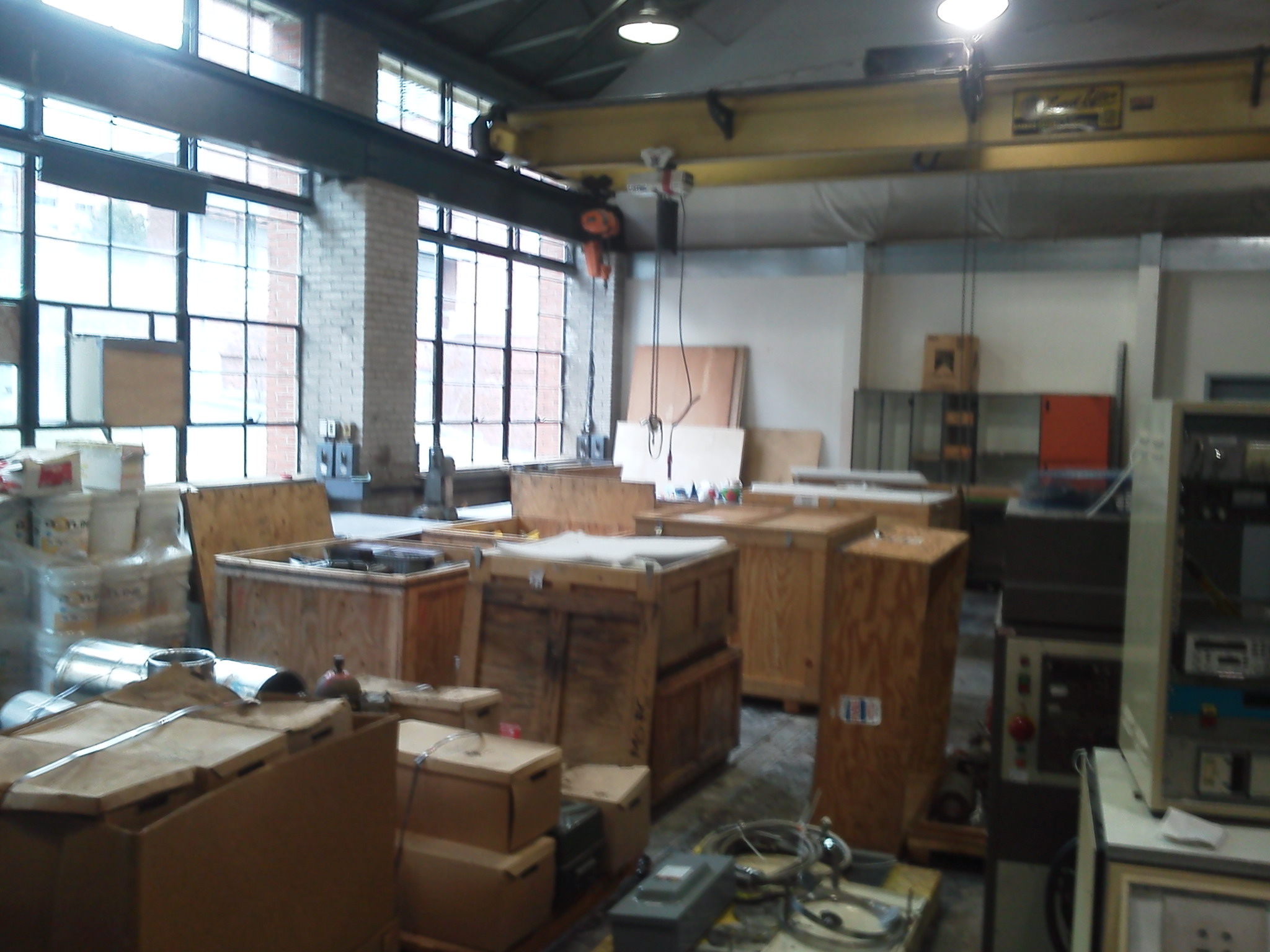 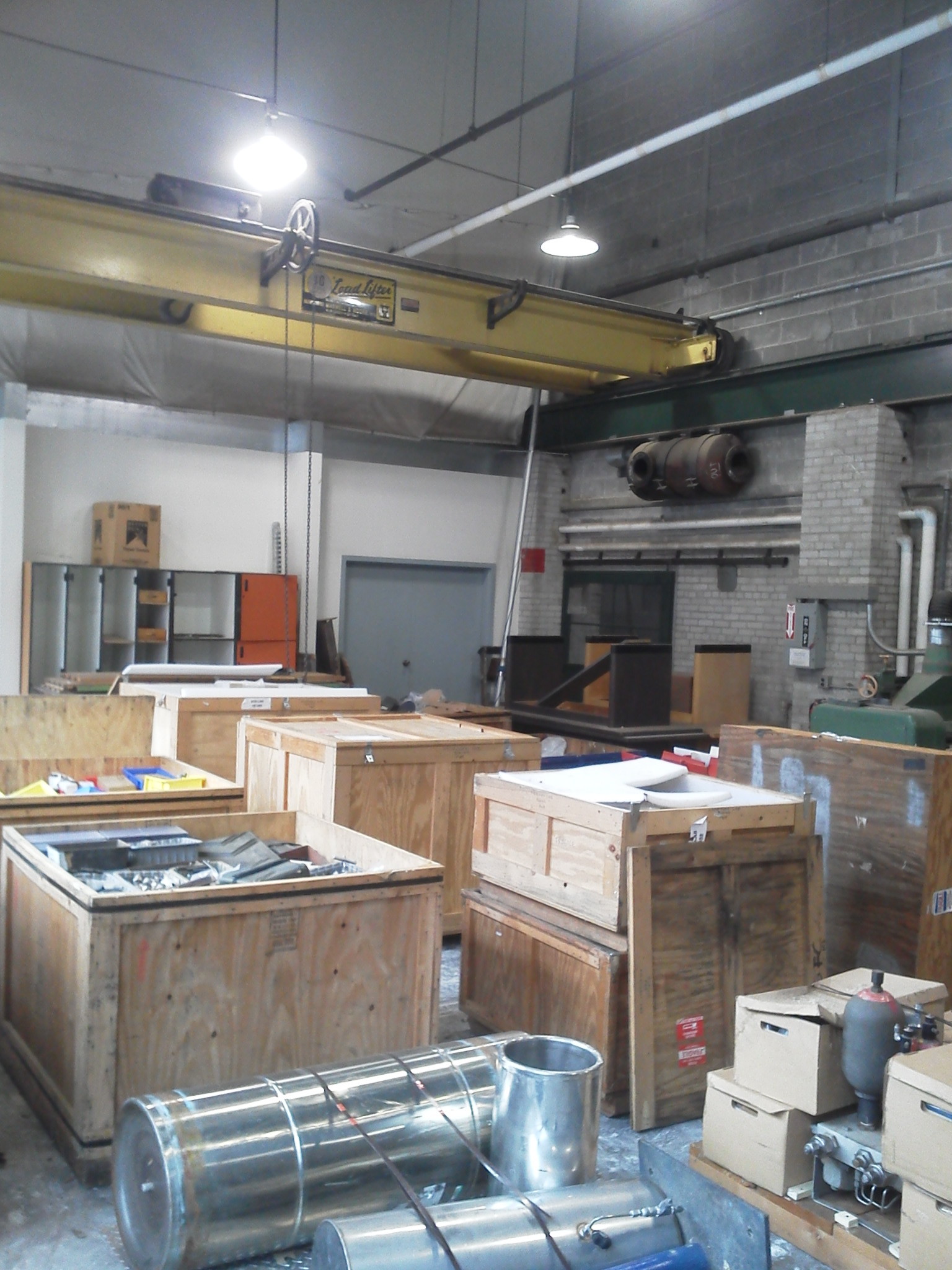 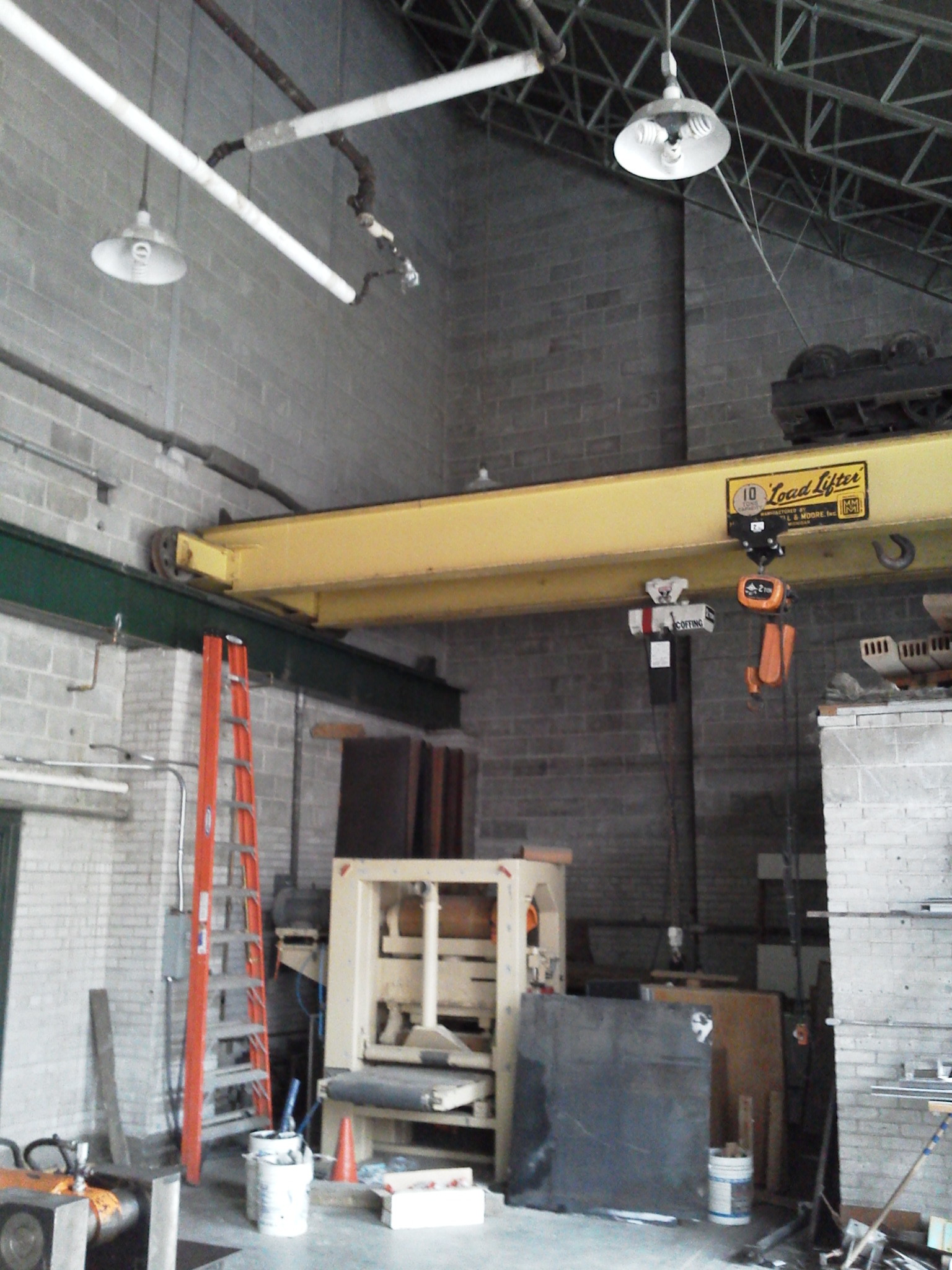 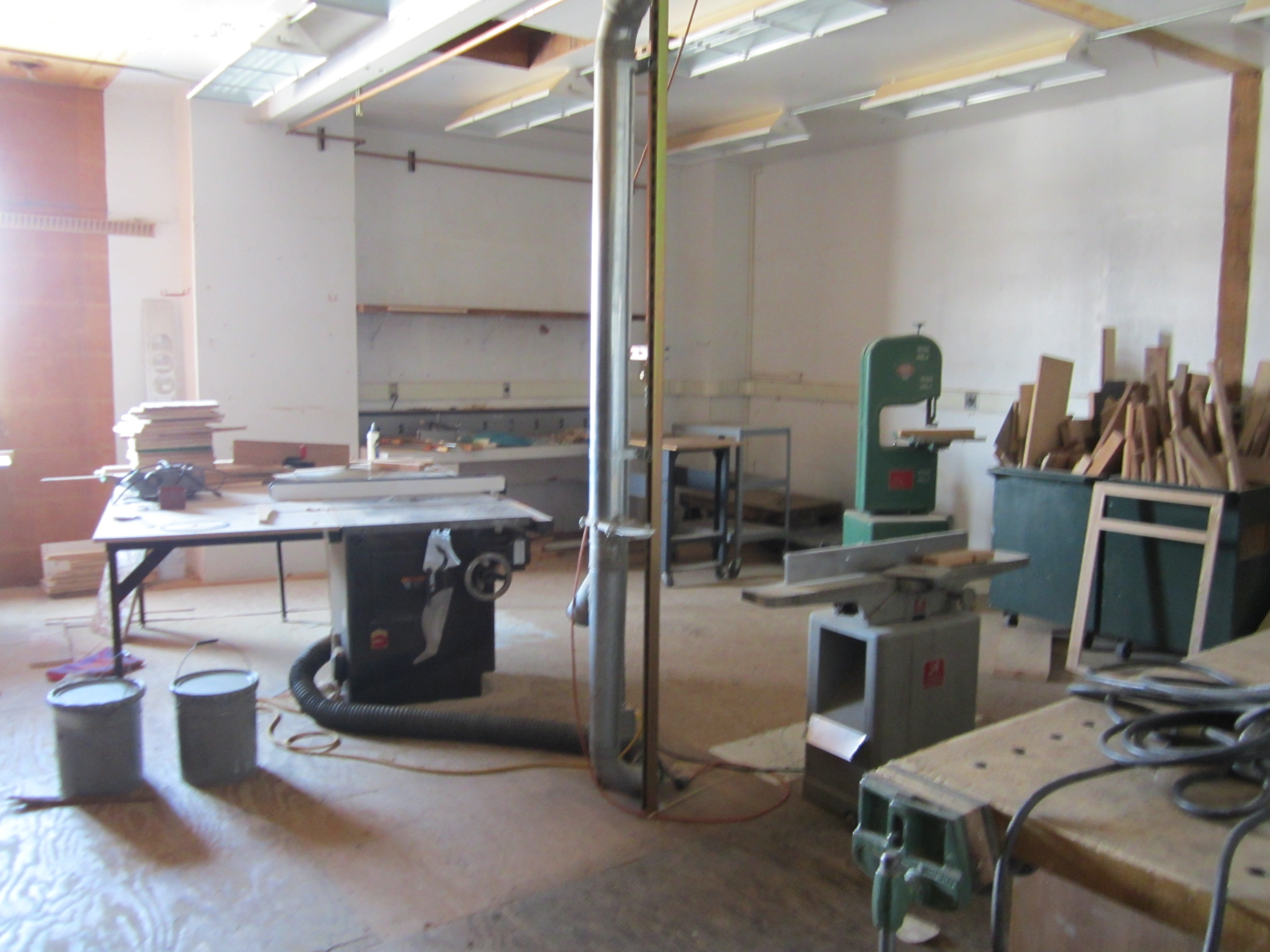 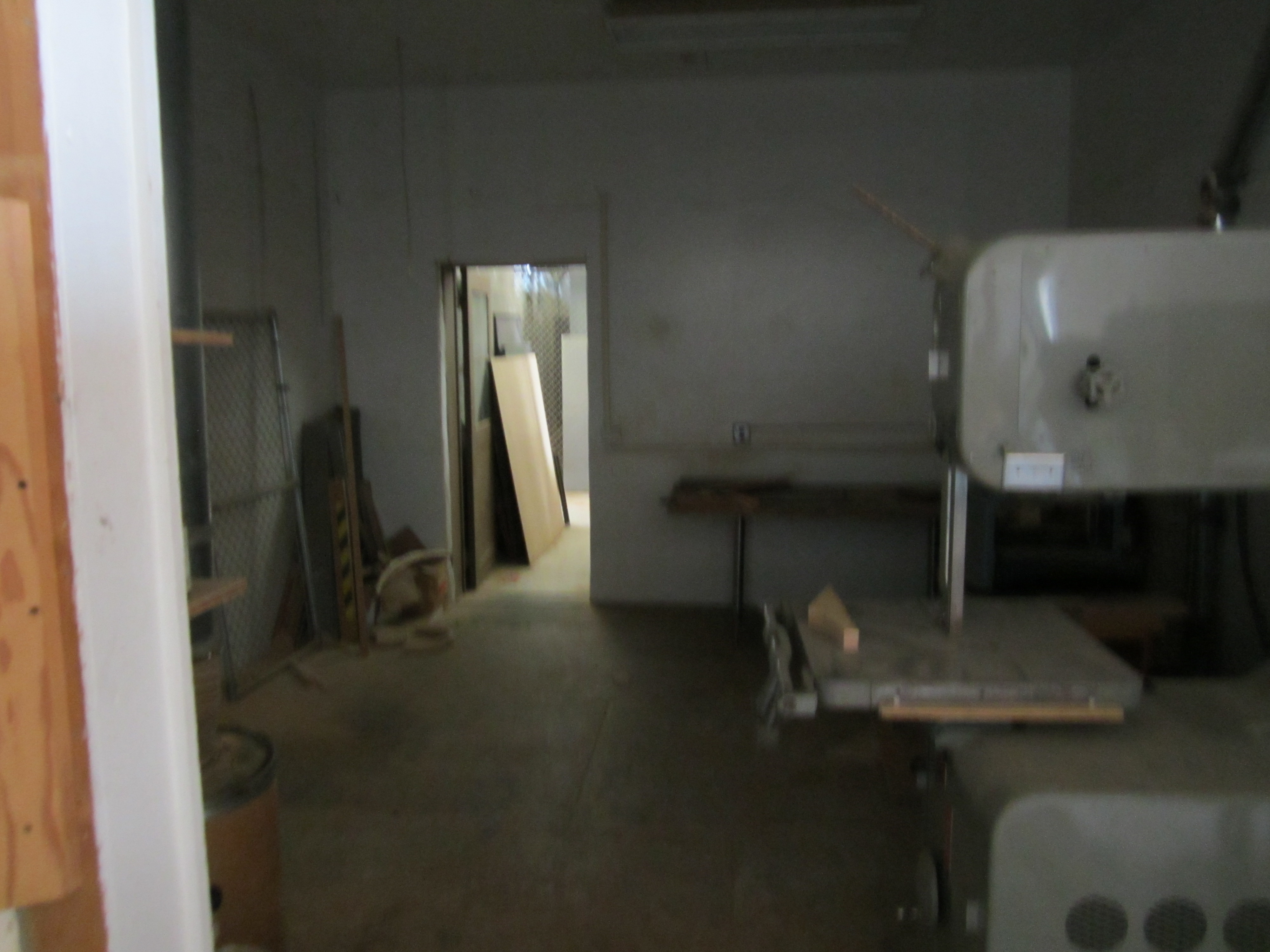 The images below show what every project build needs in order to succeed, a space capable of supporting it. After three and a half months of overcoming challenges and putting in a lot of hard work as both individuals, and a team, a space capable of success has been created. Parts have been unpacked and organized, a library set up with relevant text, projectors set up, meeting space created, the list is endless. A space where experiments can run safely and parts can be fabricated was created. A multipurpose area friendly to both professional presentations/meetings, and group lounging/brainstorming had been created. In this space the atmosphere is one where ideas can be created, problems solved, and every individual can be comfortable as part of the larger group. 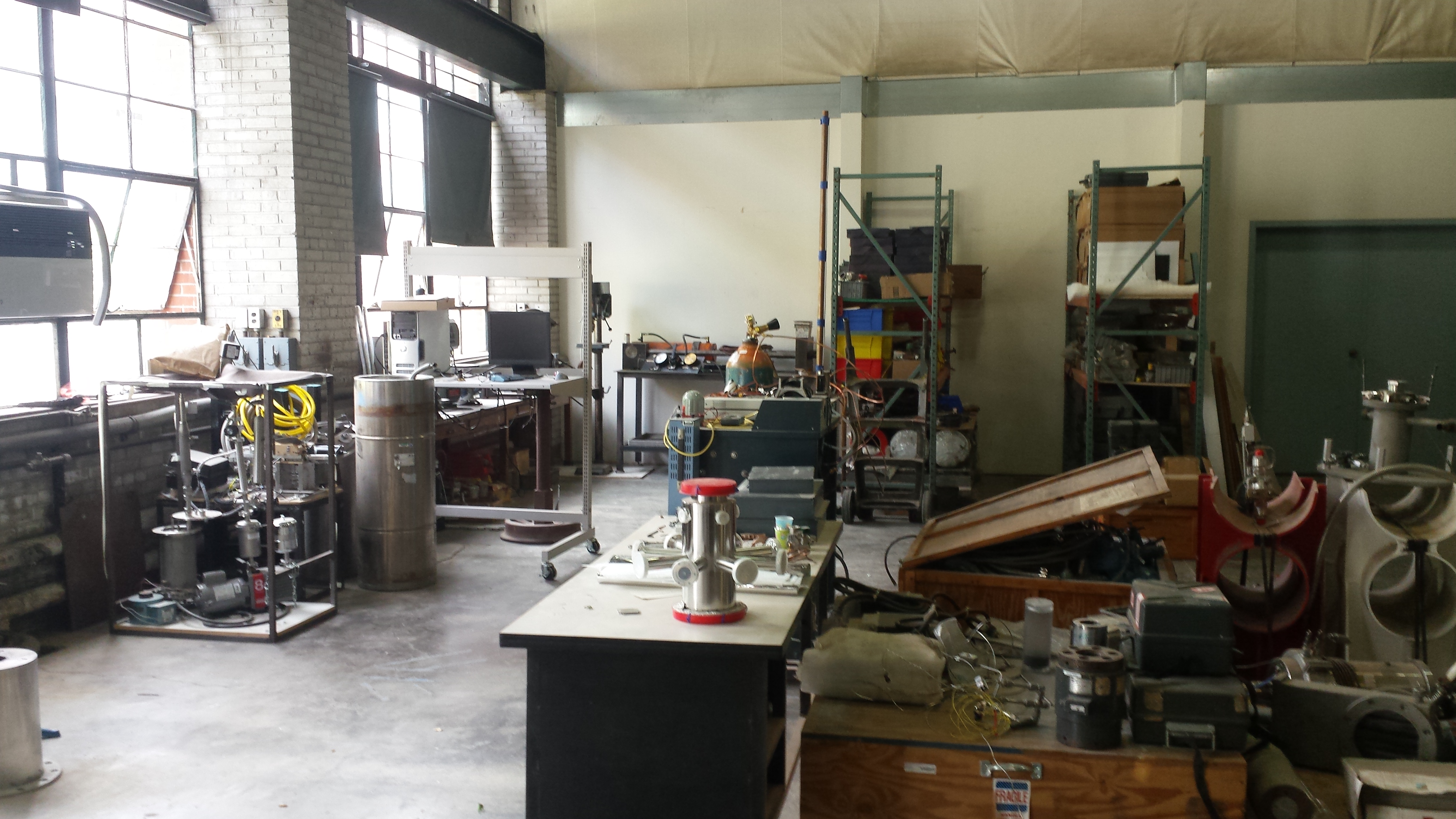 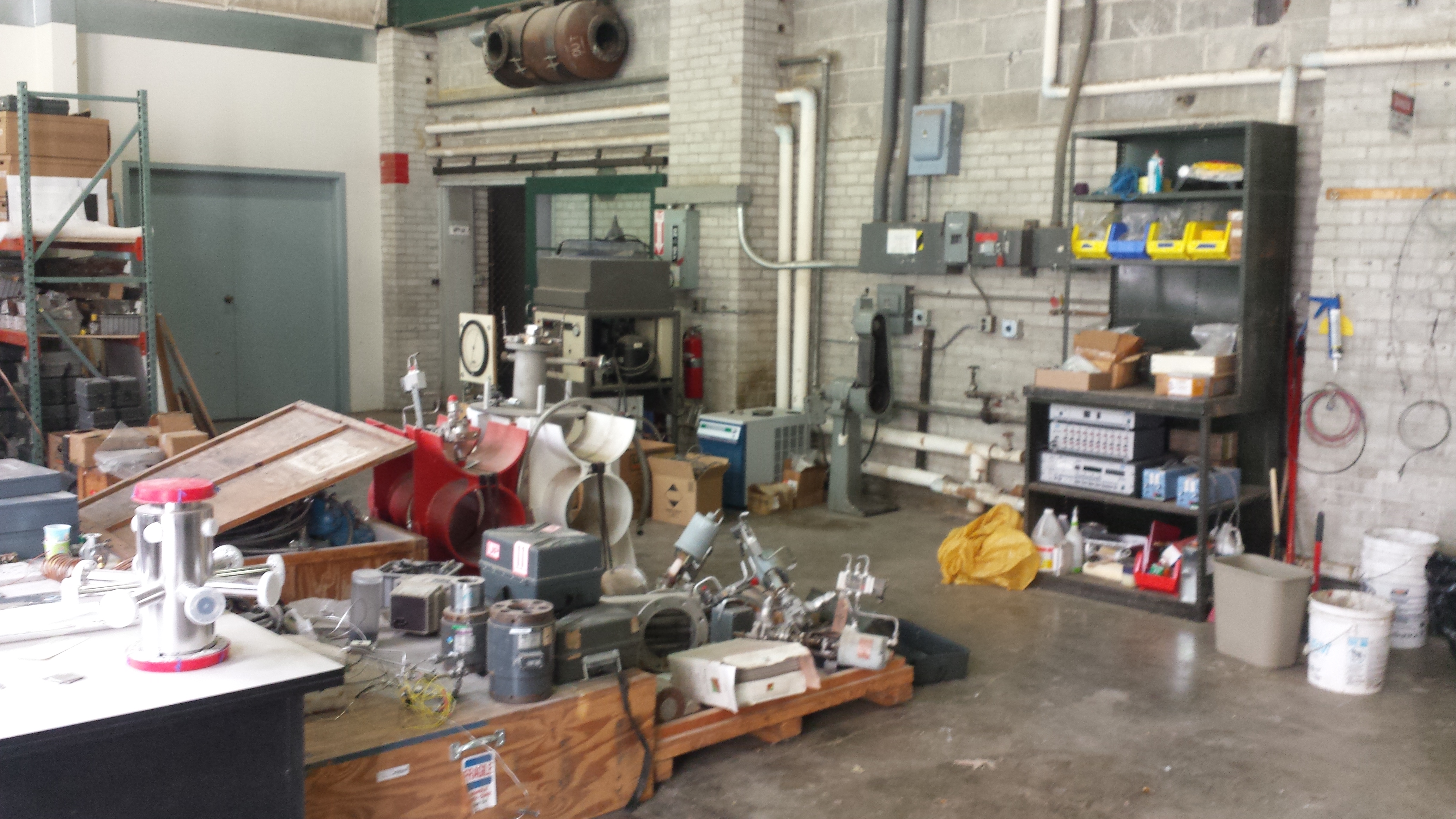 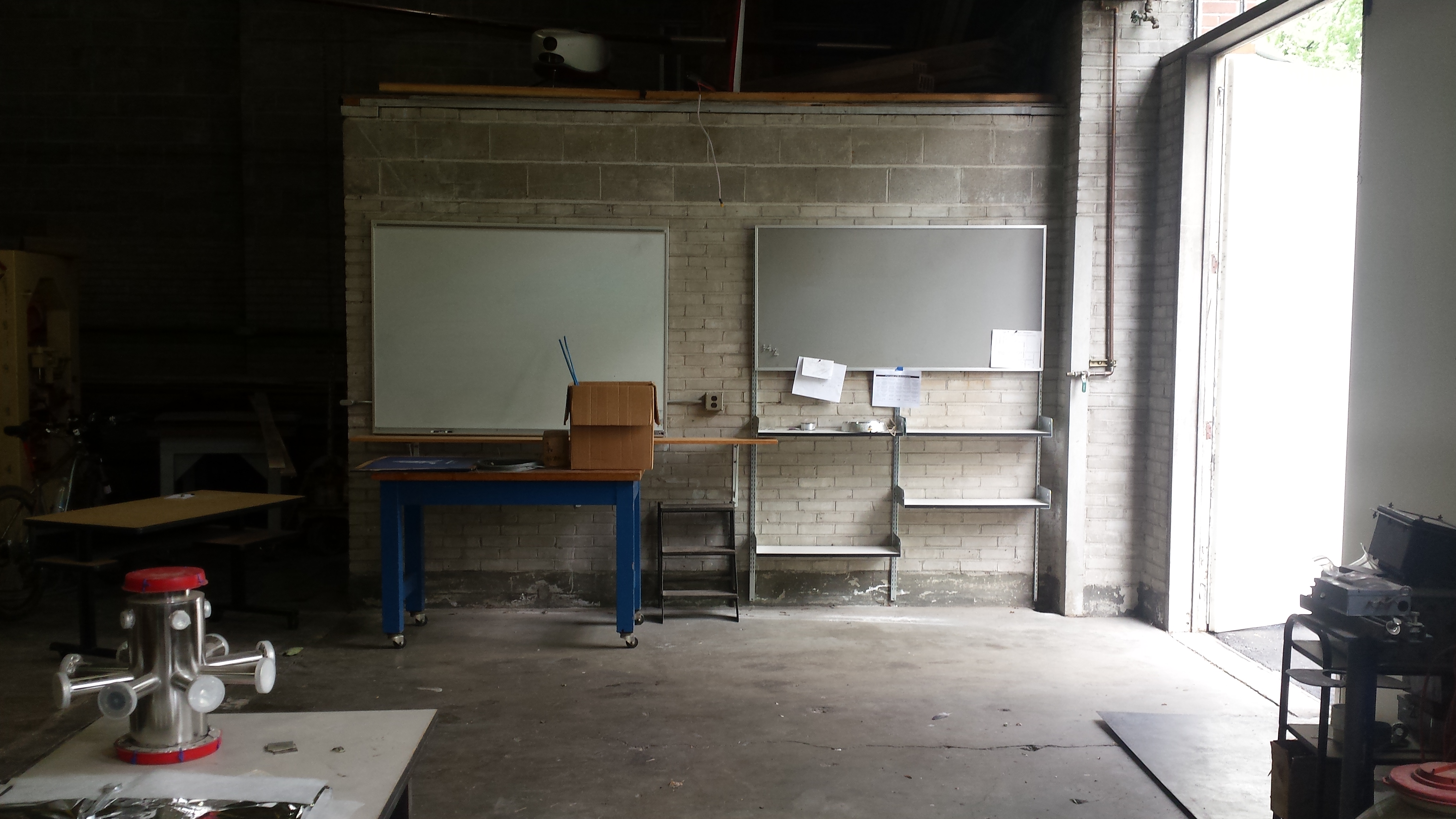 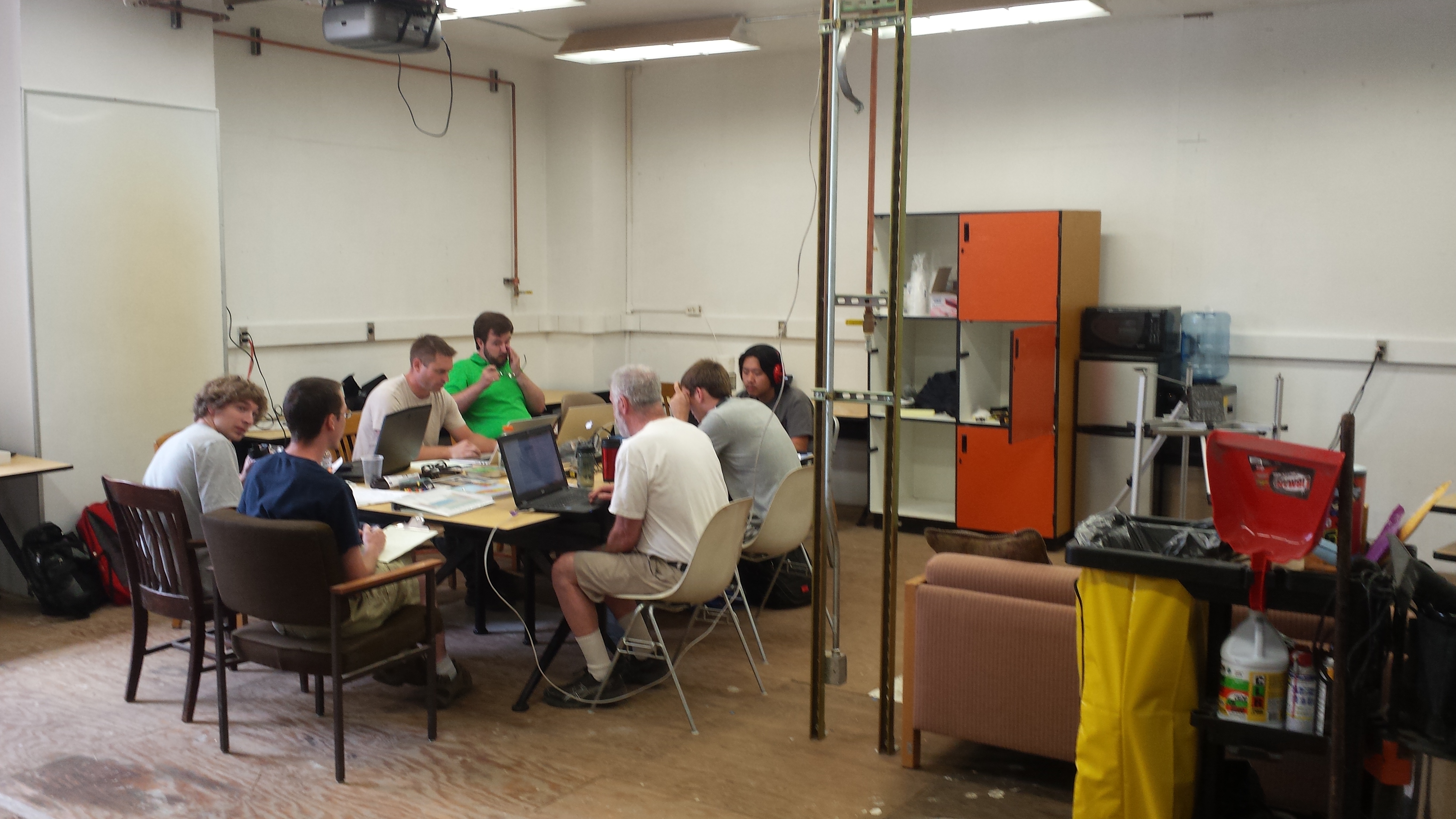 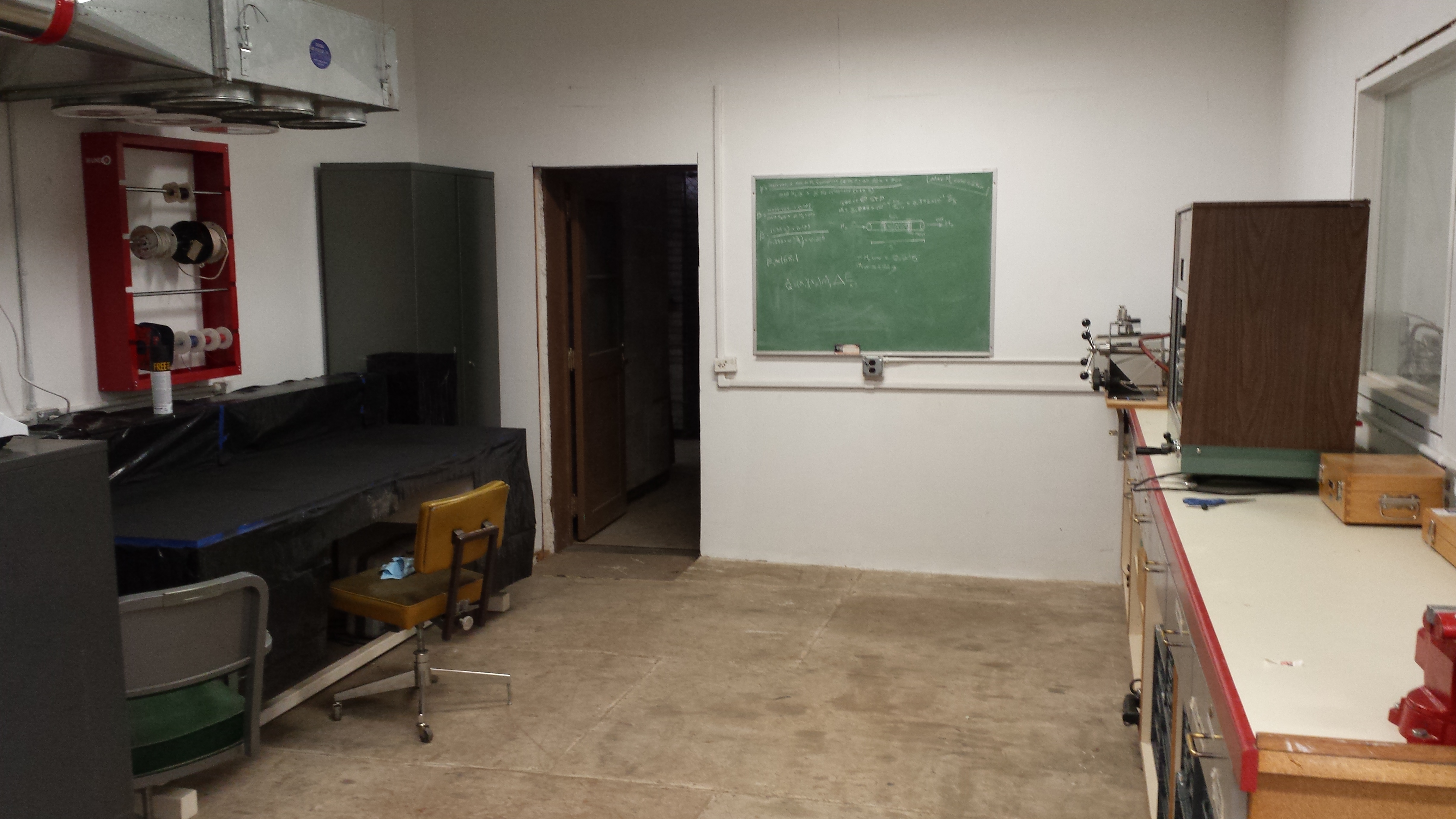 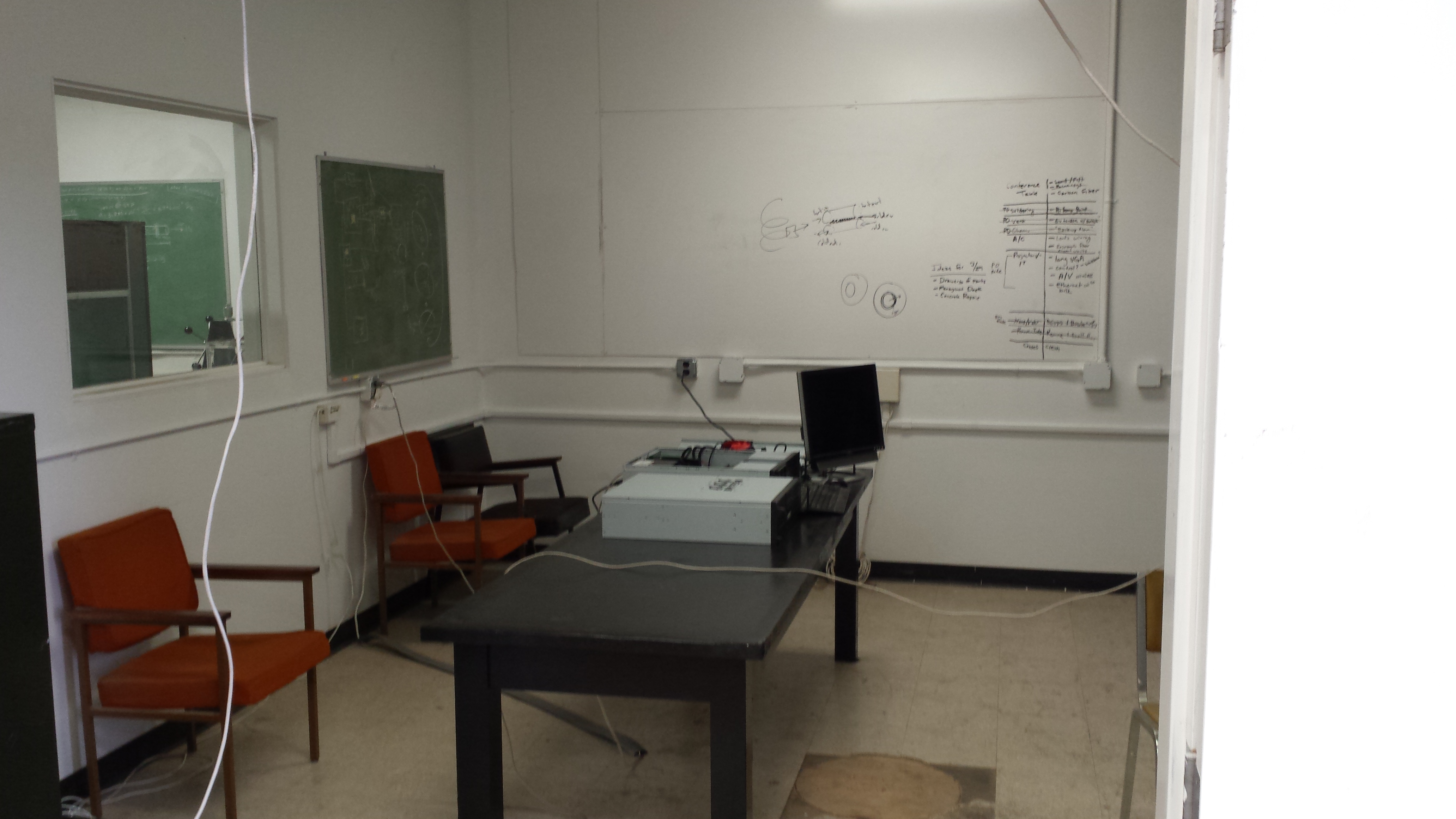 Read more about the Fabulous 8.

Over the summer of 2016, planning and progress continued on the H2 refueling system. Various parameters were evaluated to ensure that the fueling station followed all safety regulations. A large portion of the requirements for the systems completion were various safety code analyzations, which are vital in ensuring everyone’s safety and our ability to produce the fueling station without any hiccups.
The gas booster compressor, another important component to the functionality of the refueling station, was taken apart, cleaned and evaluated for use in the system. Further contributions to the station included electrical work.

Read more about the Stellar Six.

After falling far short on our fundraising campaign and not being selected as an H-Prize finalist, the project was adrift in 2017 as there still was not a location on campus where the system could even be tested. This required a pivot and reboot of the project.

Senator Patty Murray’s office decided to host an invitation only University Aerospace Innovation Summit on the Capital Hill in D.C. Insitu’s lead match-maker in D.C. accompanied me to the event and I got to see from a pro how those events really worked. I got to meet the Senator and thank her for hosting the event. This led to a follow up opportunity for a Department of Defense appropriation. As a result, in 2018 US Senator Patty Murray’s office supported a joint project with the lab, Insitu, Mississippi State University, and the Army to develop a liquid hydrogen production and refueling system for drones. This project included the necessary capital funds to construct the Outdoor Research Facility (ORF) that could house a hydrogen liquefier, dispensing location, and remote monitoring station for research purposes.

In the spring of 2020 this dream to be transferring liquid hydrogen for refueling of vehicles became a reality.

The Outdoor Research Facility on the WSU Pullman campus is the only outdoor liquid hydrogen facility in U.S. Academia. The facility was developed to characterize novel liquid hydrogen (LH2) storage tanks, fueling systems, and components. It features a gas storage building, an office container to remotely monitor and control experimental systems, and a concrete pad for LH2 transfers and LH2 fuel system testing.

An outdoor bottle garden allows us to store flammable and inert gas cylinders on site. The facility is plumbed to supply hydrogen to a liquefier from gaseous cylinders or produce hydrogen on site via electrolysis.

The first system tested at the facility is a Mobile Hydrogen Generation Unit, a containerized liquid hydrogen fueling station that can generate, liquefy, and refuel LH2 powered unmanned aerial vehicles for the U.S. Army.

The Outdoor Test Facility is located on the outskirts of the WSU Pullman campus on Dairy Road.

The outdoor research facility has opened many possibilities for the lab. It has given us much needed space to grow and advance the research we are working on, and it will continue to grow and advance for years to come. It could possibly build out to become a vehicular hydrogen refueling station among other possibilities. Regardless, we have a unique outdoor research facility to any university around the world.