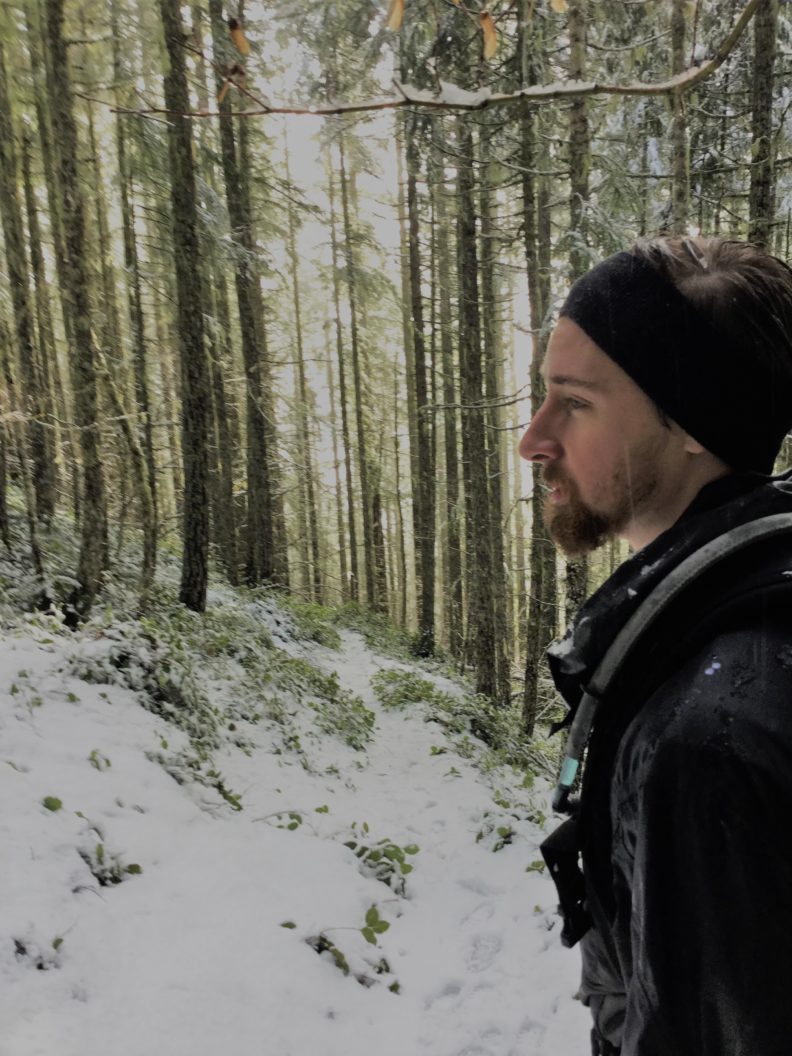 My name is Josef Woloschek. I’m a senior undergraduate in Mechanical Engineering and minoring in Business Administration. I first contacted the HYPER lab in my freshman year of 2015 and helped with small tasks while struggling to understand the complex field of cryogenics. I took a break until December of 2017 when I had learned more fundamentals of mechanical engineering. Since then, I participated in a business plan competition under the name of a start-up company of members in the lab, pitched for an Amazon Catalyst project, and began two research projects.

Many methods for measuring liquid level in a storage tank but few options work for a liquid hydrogen storage tank. MgB2 has been demonstrated as a successful superconductor level gauge for liquid hydrogen with heater wire wrapped around it. It is currently not commercialized or created outside a research lab. No effective solutions yet exist for dealing with slosh of the liquid during pitch and roll as expected during flight of a drone if it were powered using hydrogen and a fuel cell.

I began with a simple experiment of validating resistance changes due to temperature and effectiveness of a nichrome heating element by using a thin film superconductor suitable for liquid nitrogen. Results proved hypothesizes and gave me a base understanding of how the superconductors work and best ways to measure their change in resistance according to temperature.

I designed and created a MgB2 superconductor level gauge that was tested in HYPER lab’s CRYO-CATALYSIS HYDROGEN EXPERIMENTAL FACILITY (CHEF). During the experiment, a calibration curve was constructed as a proof of concept. I’m currently analyzing the potential of this type of sensor and what necessary improvements are needed before it is capable of private or commercial use. 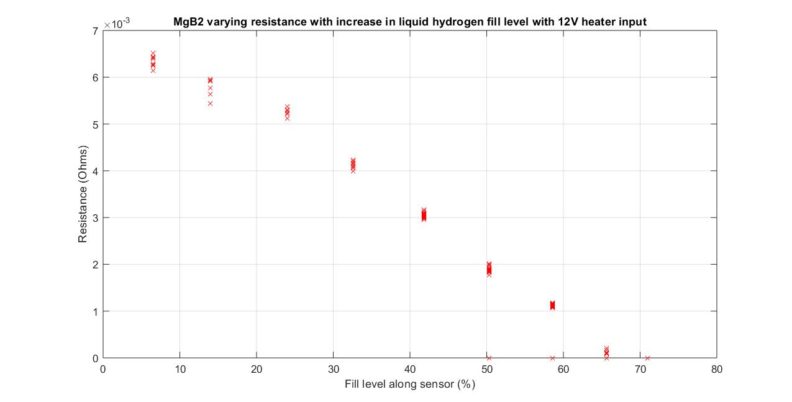 With our first results in mind, improvements are in the works. Following will be observations or comments to be taken into consideration with regards to improving or better understanding the MgB2 sensor.

A sensor with a smaller diameter given the same material, is preferred because it reduces mass to heat and theoretically should reach steady state quicker. Test was done with a .834mm in diameter wire coated in epoxy stycast 1226 and wrapped in nichrome heater wire.

Sensor should have a dense winding of nichrome or other heater wire wrapped around to ensure a perfect uniform heat map and thus give consistent resistance measurements at varying liquid levels (Varying density of wire should be tested).

Electrical leads connecting to the superconductor should be smaller in diameter and a less thermally conductive material to prevent heat transfer leaking from the outside (ambient temperature) to inside (our test system).

Capacitance measurement rely on difference of dielectric constant of liquid and gas, if these are close, cost will likely increase due to necessary resolution requirements. They’re quite technically difficult when designed for cryogenic temperatures and require careful consideration of structure or multiple smaller plates as replacement. They need to be carefully calibrated beforehand at each incremental liquid level desired to be known. For these above reasons (dielectric constants of L and V being similar for hydrogen) capacitance measurements aren’t a good choice.

Superconducting sensors are relatively straightforward but require heat input into the tank. With high accuracy and linearity, there are few things not to like about this option for measuring liquid hydrogen in a container. The primary issues are the heat input and vulnerability to magnetic fields. A well-made sensor can react very quickly, giving a resistance readout, and minimizing heat input. This is especially true if calibrated for a pulse method. MgB2 has a tendency to change resistance in a strong enough magnetic field and should not be used if a considerable one is expected unless countermeasures are taken.

Optic fibers typically rely on the same principles of measurement as a capacitance device and don’t suite measuring liquid hydrogen either unless more advanced techniques are introduced such as optical frequency domain reflectometry with in-fiber Rayleigh scattering. This also requires a heat input into the tank though presumably it would be less than a superconducting sensor. More complicated and would require more on-board electronics resulting in a poor choice for UAV storage tanks.

Acoustic wave sensors used vertically are near ideal. The drawback is the use of lithium niobite and quartz dies. They are sensitive to fractures and cracking of thermal shock. Dynamic systems and rigorous movement rules this option out unless a shock absorbing environment can be created.

Cryogenic pressure sensors aren’t ideal for less than large size aircraft and have at least a 10% uncertainty attached when measuring liquid hydrogen.

Patrick Adam, a current post-doctorate in the HYPER lab, invited me to work with him on his PhD research for testing and evaluating epoxy adhesives that have undergone cryogenic thermal cycling and used to bond 3D printed materials together. Below is the drafted introduction for the adhesive test plan.

I began assisting by designing and fabricating the automated system that would cycle the test specimens in and out of temperatures of ~77K and room temperature. I did the same with the clamps that hold the specimens together during their bonding, and the custom grips that will secure them during the lap shear tensile test carried out by an Instron machine. Patrick and I have both taken a hand in the bonding procedures as well as the process of preparing the specimens for testing. We’re actively cycling and gathering data currently.