Meet my 20 month old son and his pet snake: 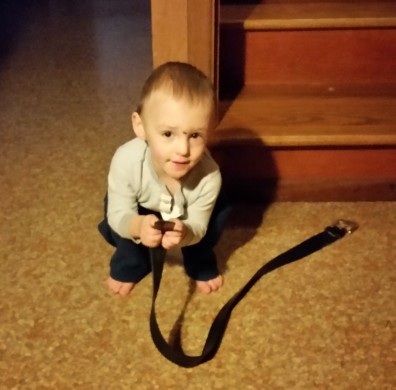 He pulled the belt out of a pair of pants, threw it onto the floor, made a “ssssss” sound, pointed at the belt, said “snake”, and backed away slowly. As far as Chelsea and I know, it was the first time he played with one of our belts, and the first time he (or either of us) called something a snake in the house. I imagine that he transferred this from 3 weeks ago when we visited a zoo and he was very excited in the snake exhibit.

I took a picture of the moment because transferring this knowledge from the zoo’s snake exhibit to our belt is classified as “transfer learning” and considered to be one of the highest and most difficult forms of learning in Bloom’s Taxonomy. While I’d like to say that my son’s a genius, he’s just a kid, and like most kids his age has an incredible ability to think imaginatively, curiously, and to associate things in ways that we adults often consider to be silly. While many Bloom’s disciples are saying this is “mimicry” the lowest level of the taxonomy and would therefore fit a kid, you have to remember he wasn’t demonstrated this behavior. Nobody can honestly believe that everything we learn in life must first be demonstrated for us, it’s a chicken and the egg problem. Upon further reading I found that preschoolers do indeed transfer learn. Even a crow in my back yard transfer learned by using a stick as a tool to ward off a squirrel when going after a nut. So you can imagine why I was taken aback when the head of the National Academy’s Scientific Teaching workshop said very slowly to a group of university faculty at WSU, “transfer learning is very, very hard.”

More clues about the problem appeared during the National Academy workshop when the head organizer described her teaching approach with, “I quiz before class, during class, and after class at the end of the day.” This mind-set is actually pretty popular these days. I’ve talked with several faculty who’ve engaged in the en-vogue practice of “flipping the classroom“, pre-recording your lectures for students to watch and take a quiz prior to class, so that the in-class time is available for student driven group activities and discussion, to be assessed at a later point in the day. A very acute summary by the faculty member called this, “the hardest work I’ve ever done as an educator!” Call me lazy, but my time is valuable, and if something feels like it’s harder than it should be, then I’m missing something.

When presented with the facts that:

2) few metrics are indicating that over the last 20 years we’ve gotten anything but worse at engineering education.

Then clearly, somehow, the majority of us are missing something.

If toddlers like my son (did I mention animals?) are naturally inclined to transfer and synthesize, then the wide-spread “problem of transfer learning” in engineering education is a result of something happening to the kids as they grow up. In follow on posts, I’ll present a theory and show that the solution to both transfer learning and the hard work of “flipping the classroom” is one and the same. When adopted, it will invert the traditional mind-set of education as a necessary resource expense to society and show that it has the potential to be the resource generating engine of society.