The following introduction to cryogenic temperature sensors is based of LakeShore Cryotronic’s available sensor packages. Much of the information in this post is from their appendices, technical information, and specification pages. General information about the sensors should be accurate for all manufacturers, but specific details about a sensor may not be. For more information, see LakeShore’s website or their Appendix B, D, or E.

Types of cryogenic temperature sensors are as follows:

Diodes: Diodes are semiconductor based temperature sensors that measure temperature as a function of the voltage drop across a p-n junction. These sensors typically have a large temperature range and good sensitivity. A major benefit of diodes is the large signal voltage provided by these sensors (on the order of Volts as opposed to milliVolts like most sensors), allowing for two wire measurements with little additional induced error. The downside to this is they require a supply current that is small (milliAmps) and very consistent (LakeShore recommends no greater than ±0.1%). Diodes may or may not have a standard curve. These sensors are typically sturdy, and easy to use.

Positive Temperature Coefficient RTDs: RTDs are temperature sensors that operate by measuring voltage across a material with known resistance changes due to temperature. Positive temperature coefficient RTDs have a resistance that increases along with temperature increases. These are typically based on metallic compounds and have fairly linear response. The most common, Platinum, is an industry standard and has standardized curves, allowing for interchangeability.

Thermocouples: Thermocouples are temperature sensors that utilize thermoelectric effect to generate a voltage across two dissimilar metal wires. They are prone to large amounts of error and should only be used where differential temperature or where low accuracy is acceptable. Thermocouples must be calibrated in-situ, as the output voltage will be affected by temperature gradients along the wire. Thermocouples come in many types, all with standardized curves and are very easy to implement and use. They can be made with very little mass when mass or size constraints are extremely important. Certain thermocouple types also have extremely high temperature ranges, if a wide range of temperatures is required.

Capacitance: Capacitive sensors can be used for low temperature measurement, but do not have a particularly large range and are prone to drift over time at low temperature. This drift is probably caused by thermal cycling of the sensor. The main advantage to a capacitive sensor is its insensitivity to high magnetic fields.

Rather than try to copy my own overview, I’ll start with at chart directly from LakeShore’s site (view the original here): 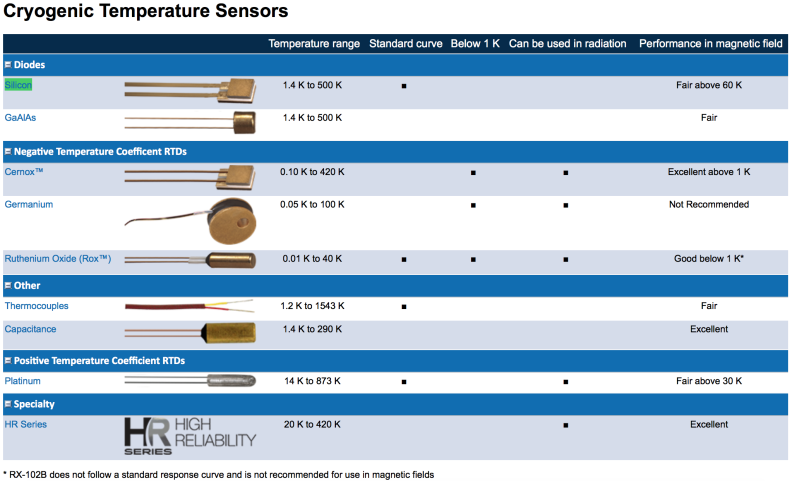