Consider this cherry tree in the WSU Arboretum: 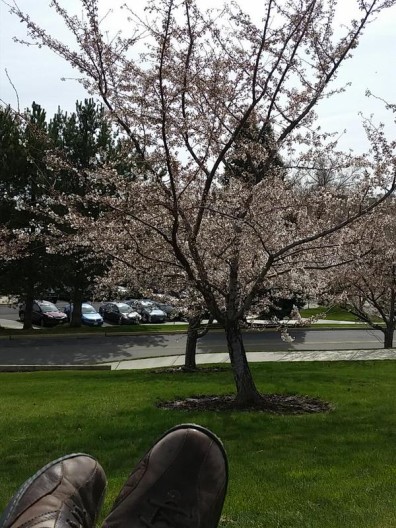 While a great view for enjoying Ferdinand’s ice cream, this tree can also teach about the design and evolution of complex systems. Why does the tree branch the way it does? Why does it branch in similar ways as these?

The image on the left is a river delta, the image on the right is a lung. If the tree, lung, and river delta are completely different, then why does the complex branching look so similarly? These observations led Adrian Bejan to develop the Constructal Law of Thermodynamics (a.k.a. the design law). Said simply, systems evolve to maximize flow. The tree and lung flow mass, in the form of oxygen, the river delta flows mass in the form of water and sediment. Tree like structures are likely optimal for flowing mass.

Bejan took this further to conclude that ALL systems evolve towards tree like structures, including snow flakes, the Atlanta Airport (I contest that the Atlanta airport is FAR from optimal), and University organization hierarchies. That last topic, University organizational structures is indeed interesting. I conducted an informal survey of my 316 class and asked them to associate which of the spiral meme flow structures most closely corresponded to universities and (no surprise) found that tree like structures (C&D) are the most associated.

While some may believe the universities are just flowing mass (ahem) and of course evolved a tree like structure, the roots probably go back to the beginning of the university system. From the 1500’s to late 1800’s most communication occurred primarily through written letter, and of course the letter mass had to be hand delivered. All of our information and knowledge was explicitly tied to mass flows. Following Conway’s Law– “Organizations which design systems are constrained to produce designs which are copies of the communication structures of these organizations.” –you immediately see why the University evolved it’s tree like structure.

The reality though is that there are many optimal systems that are not tree like at all: planetary bodies in solar systems, atomic layering of materials, and the internet (which is surprisingly and wonderfully layered (See de Weck’s system’s design book for an in-depth treatment)). These systems evolve non-tree like structures because they are primarily flowing something other than mass. Bejan’s Constructal Law is still good, just not in the tree-like structure form he intended.

Now that we have the ability to break our knowledge and information flows away from mass and tree like structures, is the optimal university organizational structure still a tree like power hierarchy? Likely not. The longer we academics persist in tree-like structures the more alienated we will become from our constituents.