I love a good science center.

One of my favorite reads is K.C. Cole’s “Something Incredibly Wonderful Happens: Frank Oppenheimer and His Astonishing Exploratorium.”  At first it’s a biography of Frank Oppenheimer growing up in the shadow of his “cerebral” older brother J. Robert through the Manhattan Project years, becoming faculty at Minnesota only to be exiled during McArthyism — all of which is essential context to explain how San Francisco’s Exploratorium came to be the seminal science and discovery center in the world. Some of Frank’s values that defined the space that have stuck with me are: 1) admission should always be free, 2) no magic, you had to see all of the inner workings, 3) everything should be intuitive, no complex instructions or explanations obfuscating the wonder of the demo, and 4) the construction workshop was an open part of the exhibits, which is why I consider the Exploratorium the beginning of the Maker movement. His values try to remove barriers to learning wherever possible and, no surprise, resonated with kids — they would skip school to hang out at the Exploratorium. While the Exploratorium has evolved over time, and Frank is long gone, his founding values have left their mark on the organization and on broader San Francisco.

I’ve since learned that children’s science and discovery centers are a very quick and revealing look at the values and health of a community on many levels. Which brings me back home to the lentil pit at the Palouse Science and Discovery Center (PSDC): 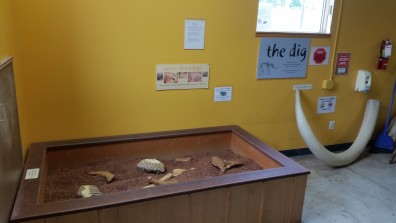 This picture was a rare moment when no children were playing in it — it’s likely the most used demo in the PSDC by a considerable margin. The question is why? Pullman is home to the National Lentil Festival so it goes without saying that we should have a lentil pit. But is Taste ‘T’ Lentil running around once a year really enough to make our community’s children infatuated with these little brown gems? What’s the magical allure of this lentil pit and how does it relate to the values of Oppenheimer’s Exploratorium?

1) Once you are into the PSDC, admission to the lentil pit is free. This is more complex of a statement than people realize. I’m not talking free in simply the monetary sense here. The lentil pit is commitment free. Nearby a graduate student was volunteering to teach kids about the material properties of a shape memory alloy called Nitinol. He was actively engaged in proselytizing the science with statements like, “Hey do you want to see something cool?”, “Want to see a metal magically bend itself?”, “Would you like a piece of candy?”, “Would you like a free taste of icecream?” –obviously the last two are either kidnappers or Costco. But the point is there. By saying ‘yes’ and accepting a sales pitch we’re committing hard earned resources (even if just our attention) to one thing instead of something else and back in our sub-conscience is a voice reminding us that we can only do this so much before we run out. Why do we need strangers to ‘sell’ science and discovery to kids when we’re completely immersed in a science reality that’s free to experience– all we need is an interpretive guide?

2) The lentil pit is not magical, contrary to the title of this post. The graduate student with the Nitinol was technically savvy and correct with his magic Nitinol metal. He would explain how atoms exist in the metal and could be trained to return to specific locations with energy application. Problem was, he was talking to children probably just 6 years old who I’m assuming had no knowledge of atoms or let alone energy. Oppenheimer went so far as to ban the use of glues and adhesives in the Exploratorium because children could not see how or why they stuck things together. The Nitinol guy might as well had been speaking Italian. Contrast this to the lentil pit. Just little brown glossy orbs– shined by the oils of countless fingers sifting  them in search of plastic dinosaur bones.

3) The lentil pit does not require instructions. Look at the picture again. No images showing you how to sift through the lentils. There are, however, no less than 8 signs telling you what not to do: “1) No climbing in the lentil pit. 2) No leaving the dinosaurs in the lentil pit. 3) Leave the lentils in the lentil pit. 4) Sweep the floor after each use. 5) Wash your hands before and after use…” and to top it off repetitive signs. The real reason the lentil pit doesn’t require instructions is that there is no wrong way to use it, it’s just free to experience however you choose– something Oppenheimer worked to achieve in most of the Exploratorium demos. No complex instructions to get wrong. At the same time though, Oppenheimer was adamant that if something broke or became a problem, it was a problem of the demo design not the users. The science was simply there for people to experience-however they experience things. Contrast this to the other demos in PSDC: 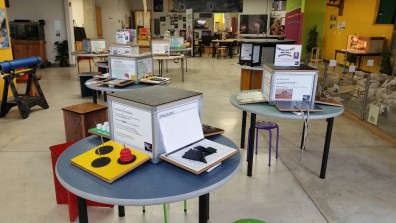 Surprisingly I didn’t have to wait long to take this picture. There are no children using these demos. Why? Look at the complex instructions. I’ve managed to figure a couple of these out- by luck. The instructions don’t actually explain why something works. For example the ring demo on the right I got to finally slip through and connect, but I couldn’t do it again if I had to. To be honest, I feel like a real idiot after trying these demos intended for children. Thank goodness I don’t have to on a regular basis in my current job. But that got me thinking, who does? And who leaves these demos feeling really confident? –I’ll hire them in my lab, else I’ll find a solution demo with Google when a similar problem comes up.

The sad thing is, go to Bonkers in Moscow on a Saturday like this one and you’ll find the building is packed full of screaming kids having fun. It’s likely that this legalistic-performance approach to STEM education is probably pushing more people away from STEM than enticing to participate. We teach people that STEM has a right and a wrong, and authorities will tell you which side of the fence you are on. Can’t follow the instructions? too bad. The fact that we have instructions for interpreting reality at all is a big part of the problem. One of my favorite Oppenheimer quotes, “Art is only valid if it corresponds to a plausible human experience.” That experience is entirely up to the user. His son is an artist residing here in Washington State.

4) How the lentil pit is made? The lentil pit is not without fault. Oppenheimer wanted everyone to know how the demos were made, and participate in the process. There’s plenty of real-estate on the walls surrounding the lentil pit for a picture of a field and a combine. Quiz the kids and see how many of them know where the lentils they just played with come from. Chelsea volunteered in a center like this once and was shocked how many kids thought bacon was their favorite fruit or vegetable. The reality is that the people who benefit the most from these demos are often the people who made them. The PSDC would greatly benefit from such a capability.

In some aspects the problem is the science center itself, analogous to a church, we convince ourselves that a special building or place is what is needed to teach us about science when it’s all around us. The magic of science centers lies in the ability to cut away the noise and increase the efficiency of your experience and augment your conventional view of reality. That’s why water tables, like the lentil pit, are so much fun. Having science interpreters and guides to help along the way and connect to concepts outside of the center goes much farther than any sales pitch. Would you buy tomorrow if someone tried to sell it to you?