One issue that I ran up against while re-designing CHEF for my thesis research was the connection point on the hydrogen liquefaction tanks. I decided to use VCR connectors because of their reliability at vacuum and low temperatures, this meant that a VCR connection directly to the tank would be easiest for design and build. As all VCR connections, off the shelf, are made of stainless steel, and the liquefier tanks were made from Aluminum (because of thermal concerns), welding a connector directly on was not an option. NPT connections were another possibility, but ultimately not chosen for fear of leakage at low temperatures. Luckily, Swagelok sells pass-through connectors, specifically a ‘Straight Thread O-ring Seal Male Connector’. Normally this would work well as the O-ring is what seals the connection, instead of the threads in a traditional NPT connection, however O-rings are usually made of synthetic rubber materials and do not work at temperatures much below room temperature (~298K). Because this needs to seal against liquid hydrogen (~20K), a rubber O-ring is not an option. We decided to try using indium as a stand-in O-ring. Indium is used in many cryogenic applications as a seal because of how well it conforms to whatever shape it is in, filling in tiny crevices and actually bonding to the metals, however it is usually used as a crush seal, meaning that there is no twisting involved in the sealing process.

After searching around I was unable to find much information on-line about an application of indium like this, only a comment made by Jake Leachman that he had seen a presentation on something similar to this at a cryogenics conference in the last year or two. So I decided to do what any engineer that’s faced with a new and untested idea does…just go for it!

For the seal I used:

The top flange of the liquefier tanks had the correct size tapped hole machined into it. On each hole we had a 45 degree chamfer, 1/32” deep; we did this because we wanted somewhere for the indium to seal against instead of a sharp corner that might cut the indium instead of smear it.

To actually make the seal I had Casey Evans, our wonderful undergrad volunteer help me. Using gloves, we first cleaned all surfaces and indium with methanol and then acetone to first get rid of any oils on the surface and then any traces of the methanol left behind. The indium was cut to length by trial and error around the O-ring groove. We cut the end of the wire at about a 60 degree angle as shown below in the diagram. This is to ensure that as the pass-through is put in that it smashes and smears the indium seal together even more

After the indium wire has been cut, we coat the wire in a thin layer of Apiezon-N high vacuum grease in order to help cut down on the friction seen by the indium. We want the indium to seal, but at the same time we don’t want it to be smearing the entire time it is being crushed, just at the end to get the final seal. We now used a small flat object to help press the indium edges together to help them fuse together. At this point the indium should look like that shown in the two picture below. Notice on the second one where the edges have been pressed together. 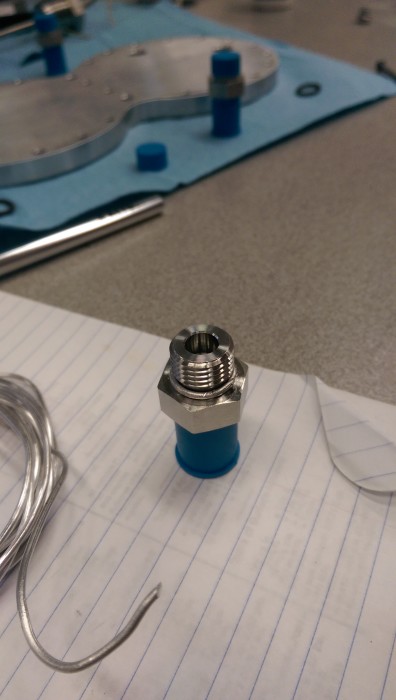 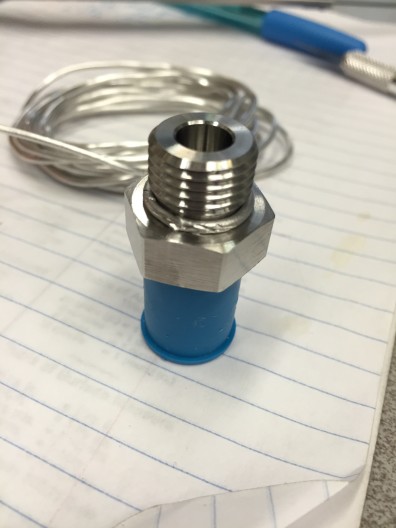 Now that all the other steps have been completed all that is left is putting it on the tanks! Originally we thought that tightening the seal down all the way would not be necessary, and actually possibly be detrimental to the capacity of the indium to seal if it were cut during the crushing. In reality we found that the seal did not seal easily, and was extremely finicky, opening up leaks when I was trying to put VCR connections on because of the twisting motions. Rubber O-rings are resilient   to small shifts in how tight the pass-through is because it is able to expand to the shape, however because indium is so malleable, it also will not expand and therefor will open up leaks if the pass-through is loosened at all. The first picture blow shows how the seal looked when not completely crushed, while the second shows when it is fully crushed in place. I found that tightening the pass-through till it wouldn’t turn easily worked well for sealing. The indium was literally squeezed out around the edges, and if one were to take the pass-through out, would see that this is true down into the threads as well! All in all, I found that these connections are actually quite reliable when tightened enough, I have four of them on my experiment and have had no leaks after tightening them enough; however I would warn against using this on connections that will be not be at least semi-permanent as there is risk each time to open up leaks when loosening and tightening the VCR pass-through. 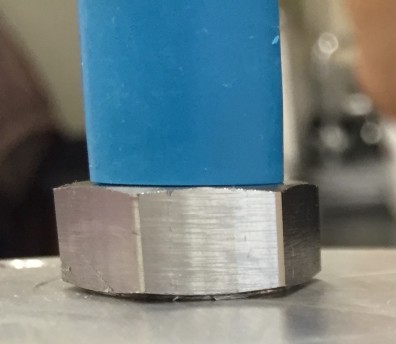 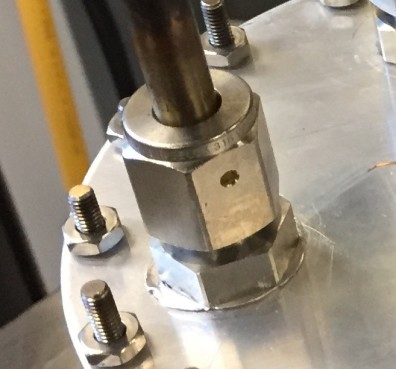