DARPA recently released a Broad Agency Announcement (BAA-16-32) titled “Next Generation Social Sciences.”  The need to hit the reset button on psychology is partly due to a recent finding that less than half of the research findings are actually reproducible. As stated in the BAA, DARPA:

For many of you that read this blog, you’re aware that I regularly dabble in integral psychology through the application of historical meme transitions under the mentorship of Dr. Charles (Chuck) Pezeshki. Chuck and I regularly discuss how we can apply mathematics to spiral memes and his complex empathy scaffolding. Chuck recently described this problem in a blog post. Early on, we realized that Chuck’s emergent empathy levels loosely correspond to statistical thermodynamic energy modes and the spiral meme structures:

“A theory is the more impressive the greater the simplicity of its premises is, the more different kinds of things it relates, and the more extended is its area of applicability. Therefore the deep impression which classical thermodynamics made upon me. It is the only physical theory of universal content concerning which I am convinced that within the framework of the applicability of its basic concepts, it will never be overthrown.” ~Albert Einstein

So here goes a first shot at this:

The first property I mapped to psychology space is entropy. Consider the Boltzmann definition of statistical entropy (more on that here):

As we go up in entropy (think empathy), the number of accessible energy modes (think vMemes) increases and the degree of coverage over multiple energy modes (a.k.a. degeneracy) also increases. One of my favorite definitions of intelligence is the maximization of future freedoms. By that definition, empathy is indeed intelligent!

Temperature is defined as the statistical average speed of particles in a system. As the temperature goes up, the more energy modes that can be awakened.

As temperature approaches absolute zero, molecules (people) cannot do anything but worry about survival and quantized (think mirroring) behavior dominates. This is the lowest Sprial vMemes structure above. Think a homeless person here, while at first glance you think they have the most freedom, the reality is they don’t have the resources to do anything.

The tighter the packing, the faster the phase change. It is true that ideal gases don’t interact with the other particles. Rural communities and isolationists suffer similar problems.

If a stress is being applied to a community, it increases the flow enthalpy of the system to change/work, or even eventually explode.

The values a society aspires towards (whether adopted or imposed) are directly related to the spiral memes that correspond to how the society transfers knowledge. The more evolved the value set, the higher the degree of plasticity and movement between value sets that is possible. For example, the Gross Domestic Product (GDP) is how the US and most Western societies gauge progress and fits in with the Performance v-Meme. The Gross National Happiness Index (GNHI) is the metric that Bhutan adopted to gauge progress and the sustainable values necessary for this small nation fall primarily into the Communitarian v-Meme, but yet require a modest GDP to achieve. The desires/perceived needs by society are also relative to a reference state, the GDP of the US is very different from Japan, etc. Just like entropy, internal energy meters don’t exist and change is relative. But change does indicate momentum, whether for better or worse.

The Gibbs Energy is defined as:

Gibbs Energy describes the potential for a system to change. If the change in Gibbs free energy is negative, a system will spontaneously change. If positive, the system requires additional inputs to drive the change. Another way to look at this, the Gibbs energy of a saturated liquid and vapor (both on the verge of phase change) is identical. So if the Gibbs energy is the same for two different social states, change is already happening! The more negative the delta becomes, the more likely a cavoom, or disruptive phase change. But think about it — the perceived progress, stress, and density of a population is counterbalanced by the available energy/resources and the empathy of the group. As Chuck says, “There has never been an evolved democracy that has declared war on another evolved democracy.”

In the above discussion I did not add in the properties of enthalpy (h) and helmholtz energy (A). It’s taken me awhile to understand these, which I’m presenting an initial stab at here.

Enthalpy is defined as H= U+Pv, which when transferred to social space becomes the value set of a person (U) plus the stress and space (v) within which a person can work. Un-empathetic people have had the agency to act throughout history because they had the values, and sufficient stress combined with the space (freedom) to act.

The Helmholtz energy is defined as A=U-TS. In other words, have a strong value set with no resources or empathy. You become a conduit through which things efficiently flow with minimal entropy generation. This is the prime target of authoritarians and other low v-Meme individuals. The more information you collect about the situation (Q) and empathy you develop for the problem (S) the more difficult it becomes to enact the exchange. In traditional thermodynamics, the Helmholtz energy is the “useful work” that can be transferred from a system with constant temperature and volume. In other words, this is the goal of the “anti-empathy” movement — rational individuals that work hard to avoid empathizing with others due to the siphoning of resources involved.

Keep in mind what we can actually measure about a society: population density, energy/resources, and may’be stress (happiness?). This is similar to what we can measure (T,rho,P) of thermodynamic systems. U, H, A, G, and S are relative to reference states.

But let’s be empathetic to the potential client here. DARPA wants to know when a riot or war will happen. The higher the energy (temperature) and empathy (entropy) of a system the smoother the changes and the less likely you are to have a disruptive flash phase change from liquid to vapor or vice-versa. See the Temperature vs. Entropy plot below generated from Nitrogen. Density increases as you go up and to the left along with pressure (stress), the opposite direction of entropy (empathy). The area to avoid is the lower left. The area we want is the upper right. Drawing these lines based on the physics/thermodynamics of real human systems is the challenge. 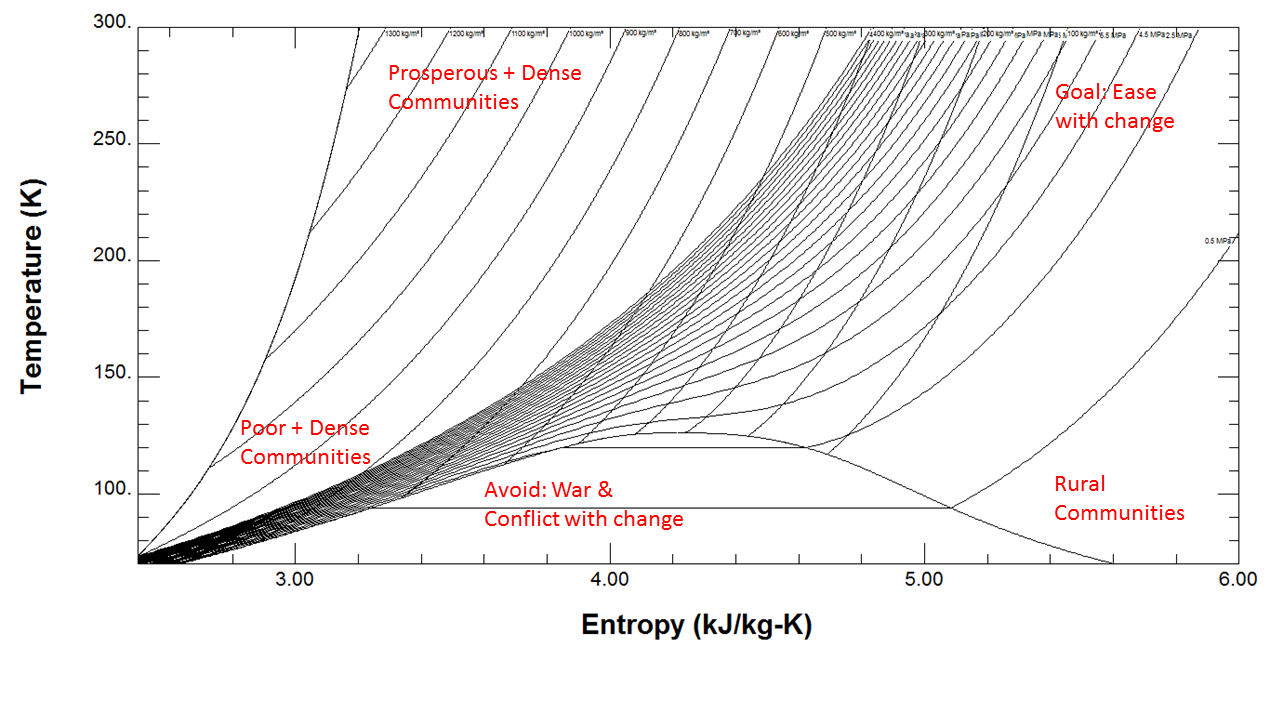 We’ll come back to this, but in summary for now, Big Al’s statement holds, we’ll have a solid foundation for social science if we can really build on these corollaries and start into the mathematics of social phase change.