I felt lost. It was my first semester at an out-of-state university where I knew exactly three people, one of whom quickly transferred. In high school, I was a part of the Idaho Space and Aerospace Scholars program which allowed me to learn about space and then visit the NASA Ames Research Center while designing a mock-mission to Mars.

I loved the experience.

Coming into college, I was a chemical engineering and honors student.  Dissatisfied with the general direction of the ChemE program, I began looking into alternative engineering fields. At the same time, my honors leadership course posed the question, “What do you want to do?” The exposure to so many passionate people at and around NASA made me declare, “I want to work for NASA.” This led to Dr. M Grant Norton, the Dean of the Honors College, putting me in touch with Dr. Jacob Leachman (Jake), the founder and director of the HYPER Lab.

We scheduled an interview.

The day of the interview happened to coincide with the day I had arranged with my advisor to change majors. I walked to the advisor’s office and changed my major. Immediately afterwards I quickly walked to the HYPER Lab’s old building, TFRB. Upon arrival, I glanced at my watch and saw I was five minutes early to my interview. Perfect! That should make a good impression.

I spent the next 25 minutes trying to figure out how to enter the building.

Upon finally entering the large bay doors with a neon sign above them that clearly said HYPER, I walked through a large machining area, into a backroom, and then into a conference room. Upon sitting down and profusely apologizing for my tardiness, Jake joking told me that finding a way into the building was the first test. We then talked for a while about my background and got into the meat of the interview.

I was offered a job on the spot anyway. Apparently, something in that mess of a conversation looked promising enough to give a moonshot. I was hired to the HYPER Lab and was elated.

However, for the next few months I didn’t know what to do. I was inexperienced and lacked confidence in my abilities. This, compounded by a few events gone wrong, made me seriously reckon with what I wanted to gain from and provide to HYPER.

I failed to standardize cutting procedures for the aluminum struts used in making desks for the graduate students resulting in roughly $600 of wasted material and numerous wasted hours for about fifteen people.

I failed to practice effectively for a tour rehearsal and was ridiculed beyond compare in front of my peers, or it felt like ridicule at the time anyway. I now understand the intention for the coaching and can see the value now that I’ve gained a bit of experience. However, at the time I couldn’t. I didn’t have the guidance I had expected in preparing for the tour and hadn’t spent enough time on my own to understand where the holes in my knowledge and performance were. I had spent less than an hour the night before typing out notes on my phone, thinking I would use them for reference the day after. Upon arrival, I saw a lot of unfamiliar faces. This was my first time really meeting many of the lab members outside of the Core Team. I was nervous. We started the tour and I was up first, despite having been in the lab the shortest time of the presenters and as such not feeling confident in the slightest. Immediately, I was told to put my notes away. I tried to appeal but they insisted. I floundered. Once I had tried to begin a few times, I was stopped again and told to stop moving my hands. To accomplish this, I was made to hold water bottles. Already panicking, I simply couldn’t focus on this new task. My first public appearance at the lab was a performance and I failed miserably in front of my peers. A few tried to console me after the event. I seriously considered quitting.

I failed to tighten a screw, briefly loosening it instead which led to a question: “Are you sure you’re an engineer?” It stung. As much as I hate to admit it, I initially stuck with the job to prove I am an engineer. I wanted to prove that I hadn’t wasted my time and energy on something. Waste. Eliminate waste. Efficiency. Make everything more efficient. Make everything fool-proof so a fool like me couldn’t mess it up. But how could I do that? I didn’t have the experience. What I could control was my attitude. I was adrift but remained coachable. This ensured I could move from being a -1 to a +1. I could learn from the experiences I had and do better the next time. I could become an engineer despite certainly not starting as one.

If you’re asked about your “three freakishly awesome engineering achievements,” consider the many forms that they can take. “The words engine and ingenious are derived from the same Latin root, ingenerare, which means “to create.” The early English verb engine meant “to contrive.” Thus, the engines of war were devices such as catapults, floating bridges, and assault towers; their designer was the “engine-er”” (https://www.britannica.com/technology/engineering).

So what does it mean for you to be an engineer? Maybe you fail again and again, learning each time. Maybe you make a new logo for a laboratory. Maybe you draft onboarding documents. Maybe you learn to build desks with aluminum struts. Maybe you learn to implement Agile and Lean philosophies. Maybe you help renovate a website, rebuilding it from scratch. Maybe you play around with flashlights and a mirror in your garage and made some 3D printable parts to hold everything in place. Maybe you repurpose and adapt not only existing technology, but your past experiences, to work on a project to assist lunar exploration. Maybe you learn from those around you and those incredible experiences you’ve had, improving yourself accordingly. Maybe you connect with a wonderful community of inspired and talented people, learning and sharing as you go. Maybe that’s all it takes.

I started this journey with no clue that I could grow as much as I have. I had no clue I’d meet so many amazing people: the teams, the supporting staff, the community of knowledge and experience, the HYPER. Through my failures I remained patient and coachable, using the immense knowledge and experience of those around me to inform my path forward. That is why I even had the chance to succeed.

While at HYPER I had the privilege of leading a team of undergraduate and graduate students while an undergraduate myself. We developed technology that has been nationally recognized, literally shooting the moon with liquid cryogens. This technology won the top honor, the Artemis Award, for the 2021 NASA BIG Idea Challenge. I still don’t know how to wrap my head around this. I don’t know if I ever will. Looking back my path looks linear. It certainly didn’t feel that way while on the journey. I doubt it ever does. 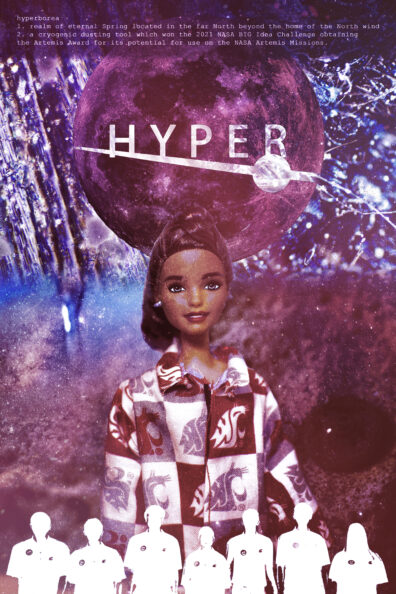