Chad Nixon is a legendary member of the HYPER lab because… 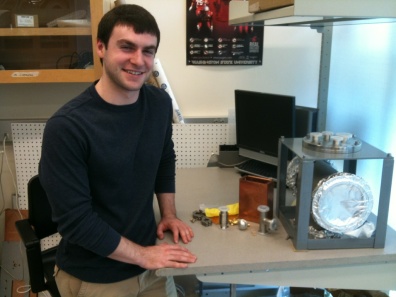 Chad, always an optimist, stands next to an early version of his experiment.

he was the hardest working undergrad I had met.

Chad was in the first class I taught at WSU: ME 301 Thermodynamics, MWF at 8:10 am. To say the class was a shock to the system is putting it mildly. It was extremely difficult and I knew that, it’s much easier to make a class easier in subsequent semesters than to increase the difficulty.  The class of 60 was in for the most challenging course they faced at WSU. Chad ended up finding a way to stand out amongst his peers.

I was in the REC exercising at 5:45 in the morning before class. I rarely saw other students there at such an early hour. Chad was there, by himself, doing his routine pull-ups. The homework assignment due in 2 hours was particularly difficult. I asked Chad if he got through it, he had, albeit at a late hour. This level of dedication to personal well being was incredible to me. Some are addicted to exercise like this and their egos show it. Chad, however, was incredible humble, polite, and curious, the polar opposite of the stereotype.

Chad’s superior work ethic paid off. We had a project with little to no funding, that relied almost completely on his ability to fabricate and think to complete on time. Thanks for the hard work Chad, it will take you far in life.

I grew up in Richland, a city located near the Hanford Nuclear Reservation in south eastern Washington. As a kid I enjoyed the outdoors, playing sports, and building LEGO sets, all of which I still love to do today. I graduated from Hanford High School in 2008 and was accepted into Oregon State University, the University of Washington, and Washington State University. I had been born and raised a Coug by both of my parents, who are WSU alumni, so the decision to enroll at WSU was quite easy.

I started at WSU in 2008 majoring in Mechanical Engineering. I went into engineering because I had excelled at math and science in high school and was advised to go into mechanical as it offered the most flexibility of the engineering disciplines. I was unsure about my career path until I reached the third year of the ME curriculum. This is when the breadth of the mechanical engineering courses began and I quickly became captivated with the subjects of thermodynamics, fluid mechanics, and heat transfer. These subjects are very relevant to the production and transportation of energy and I soon found myself planning for a career in that sector. I enrolled in most of the energy related courses offered at WSU, which include topics in solar thermal power, biofuels, and nuclear engineering, to determine which energy field I wanted to work in. Not wanting my decision to be based solely on classes,  I began to look into undergraduate research opportunities and, through a series of fortunate events, was able to land a research position in the HYPER Lab.

I joined the HYPER lab in the middle of my junior year and was tasked with designing a target cryostat that could grow bulk solid hydrogen targets for positron moderation studies. In my first semester I developed a numerical heat exchanger model and initial design of the cryostat, which resulted in a conference paper at the 2011 Cryogenic Engineering Conference. I was then able to secure several undergraduate research scholarships and fellowships (DeVlieg, Auvil, NASA), which provided funding for me to continue my research and begin purchasing equipment for the project. I was still working on the cryostat when I graduated with my bachelor’s degree in 2012 and, wanting to finish what I started, decided to stay at WSU and complete the project for a master’s degree.

I completed my master’s thesis on the “Design, Construction, and Characterization of a Target Crysotat for Positron Moderation Studies” in September 2014. While working on my master’s I found that I really enjoyed the research process and, through a combination of working at the Pacific Northwest National Laboratory and courses I took at WSU, finally determined which energy field I wanted to work in: Nuclear. Wanting to continue in research, I applied to several nuclear engineering doctoral programs across the nation and eventually landed at Oregon State University, where I started in the fall of 2014.

I am currently an ARCS Scholar and NRC Fellow in the Department of Nuclear Engineering & Radiation Health Physics at Oregon State University. My research interests are in experimental nuclear reactor thermal hydraulics and I am working under the advisement of Dr. Wade Marcum. 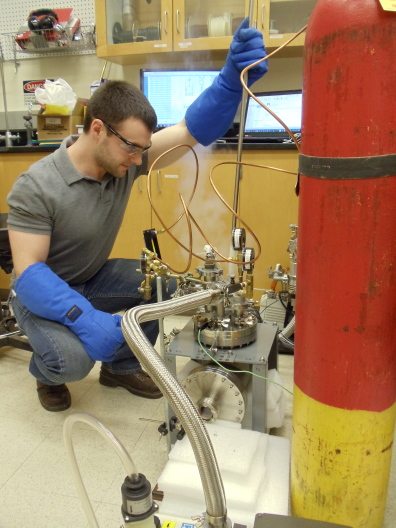 Cooling down the cryostat with liquid helium.

My research involves the design, construction, and characterization of a target cryostat for positron moderation studies. Positrons, which are the antiparticles of electrons, are utilized in various medical and scientific diagnostic techniques. However, despite the widespread use of this technology, positron source utilization remains less than 1%. The low efficiency is primarily due to positron destruction during moderation. Emitted positrons must be filtered through a moderator material to restrict the re-emitted positrons to a useable and defined energy range. The quantum mechanical nature of solidified hydrogen holds the potential to increase the moderator efficiency an order of magnitude over solid neon–the current leader in moderator efficiency. However, difficulty in designing a cryogenic apparatus that can interface with a positron accelerator has limited investigations on the characteristics of solid hydrogen as a positron moderator.

My project is focused on developing a target cryostat that can grow cryogenic solids for positron interaction experiments in the positron accelerator located in the Webster Physical Sciences Building at WSU.