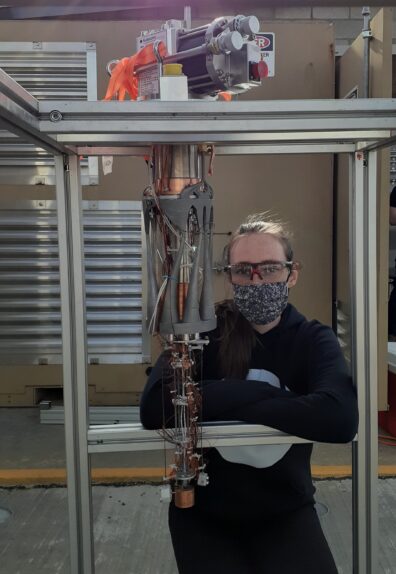 Hi! My name is Jordan, I’m a Washington native, and I never expected to end up here.

I came to college with a passion for renewables and started out as bioengineer. Unfortunately for me, the focus of that degree is actually medical school – not ideal. I transitioned to mechanical engineering (worst case scenario become a jack-of-all-trades, right?), and it wasn’t until taking thermodynamics with Dr. Leachman that I realized renewables existed within that major as well.

I had never considered hydrogen. After all, all anyone talked about was it exploding so I never considered it viable. After learning that was not in fact true, I once again began pursuing renewables by joining the HYPER Lab in Fall 2017 as a junior. I was given my own project under Carl Bunge and got to work.

Did you know that it costs about $10,000 to launch one pound of material into space? The technology that I developed could be attached to the outside of an aircraft, allowing oxygen reservoirs for breathing purposes to be filled while the aircraft passes through the atmosphere, saving tens of thousands of dollars. It could also be used as a replacement to distillation columns, or portable medical oxygen tanks.

The basis of the tech is a Ranque-Hilsch vortex tube with six rare-earth magnets mounted along the periphery. A calibrated air mixture is liquefied upon entry into the vortex tube, allowing us to take advantage of the paramagnetic properties of liquid oxygen and increase oxygen purity of the gas. Previous research has investigated the paramagnetic properties and vortex tube dynamics separately. With an inlet oxygen percentage of about 21%, we were able to achieve an outlet percentage of almost 42%. For more information you can either read the paper I wrote, which was published in Advances in Cryogenic Engineering, or peruse the poster I presented at the 2019 Cryogenic Engineering Conference (CEC). The technology is also being patented. Future work needs to be done with varying geometries, cold fractions, and gas mixtures. This project helped me earn the Donna Jung Scholarship at CEC well for being the top female student in the country within the field.

I’m now a graduate student within the lab and working with hydrogen rather than oxygen. I am part of a Department of Defense contract to create a small-scale (<5 ton/day) hydrogen refueling station for drones where I am responsible for the liquefaction and thermal components of the project. You can learn more about the overall project here. The entire system fits in an eight-foot cube! Working with undergraduate teams, I lead the design, build, and fabrication of all components within the dewar. The most notable being a thermocouple temperature rake, superconducting liquid level gauges, and a heater block.  My thesis focuses on the design of a novel heat exchanger.

Current liquefaction systems are large-scale, and only operate within 20-30% of second law efficiency. Small-scale systems have even lower efficiencies due to poor performance of system components. As a result, small-scale systems aren’t cost-effective. One of the components with the largest room for improvement is the heat exchanger. Increasing small-scale system efficiency and feasibility are key to increasing accessibility and opportunities for new technological development. For instance, this technology could bring about a surge of offshore windmills, and help store power from other renewables as well. Accounting for the integration of catalyst will further this potential by minimizing future boil off, therefore lowering buying costs.

I loosely based my heat exchanger optimization on the Hess-Murray Rule, which details ideal ratios for optimizing fluid flow systems threw branching. Although the ratios don’t hold for my system, in part because due to the dissimilar properties of hydrogen and water, the principle still holds. Advances in additive manufacturing make it possible to build such a system. In addition to branching I employed a varying wall thickness equation to help siphon heat towards the flanges on a dual-stage cryogenic refrigerator, as well as account for varying thermal properties in the material. The final design looks like this: 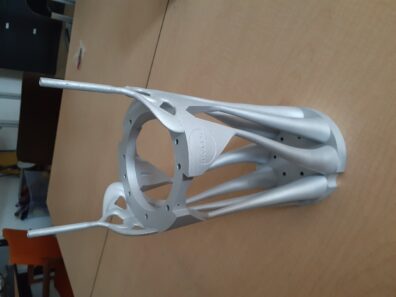 The heat exchanger accepts gaseous hydrogen at ambient temperature, branches four times for a total of eight tubes, and outputs liquid hydrogen. The optimized system, which minimizes entropy generation, was printed in AlSI10Mg although it was designed for 6061 Al. The theoretical model, when compared to a single-tube system, shows an increase in effectiveness of more than 0.2, a decrease in thermal mass of over 40%, and a decrease in length of over 90%. In practice, the heat exchanger liquefies hydrogen at a rate of 3.5 mg/s, which is lower than predicted and this is likely due to unfavorable properties of the printing material.

Now I’m off to the real world, and I’m extremely grateful for my time at HYPER. I’m entering industry and I hope to continue working in cryogenics and furthering hydrogen technologies. Check out my LinkedIn for updates!