Justin Bahrami is legendary in the HYPER lab because…

Justin with the upper fuselage of Genii. 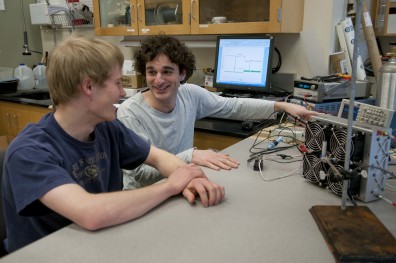 he was one of the core fabulous five that made Genii happen.

He grew up in Los Angeles while his father, an engineer at JPL, worked on Voyager. Destined to become an engineer right? Not so fast…

Justin attends Juilliard instead and becomes a master flutist. He always knew he was born to make things though and had a small machine shop assembled in one of the bedrooms of his apartment. During a stint with the Spokane Symphony Orchestra, Justin decided to apply to WSU and get his BS in Mechanical Engineering.

I first met Justin during my 2nd ME 301 Thermodynamics course. After the 3rd week of class Justin came to my office and told me it was too much work. He was right. It was too much work to do everything. He was the first student I had to fully master the art of accomplishing adequate. This allowed him to do several incredible things in Thermo.

One of my lectures on Entropy goes through the example of a vortex tube-a device that create a stream of very cold gas and hot gas from a compressed gas source with no moving parts. Justin came up to me, told me it was black magic, and that he was going to make one over the weekend to prove it. Over the weekend he took apart a piece of furniture in his apartment and soldered on some plumbing fittings to make his own vortex tube. On Monday he came to my office and demanded we go down to the lab to test it. I brought along a commercial unit another faculty member had purchased for comparison. To my surprise, Justin’s homemade vortex tube achieved a 10°C colder outlet temperature than the commercial unit! By the end of thermo he was constructing a pulse tube refrigerator from an old air compressor.

Justin came on board the Genii project after meeting the great group of students and the ambitious plans we had. He was instrumental to the teams success. Leading many of the photography and late night build efforts.

When it came time to graduate, Justin realized his timing wasn’t perfect and Genii wasn’t finished. He did something incredible and decided to stay in Pullman and work in my lab on a small research project characterizing the transient performance of Proton Exchange Membrane Fuel Cells (PEMFCs) while finishing Genii. The move payed off. We published some of the findings in the International Journal of Hydrogen Energy. And he had the pedigree necessary to land interviews with the top rocket companies in the country. He’s now at Blue Origin LLC in Kent.

Congratulations Justin and enjoy the ride!