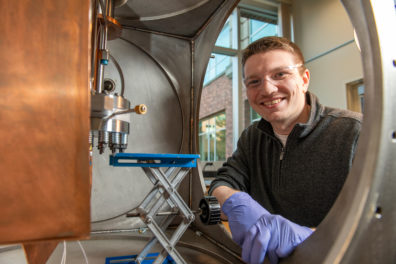 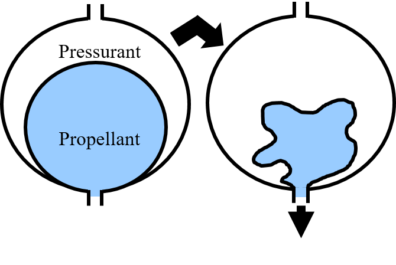 Today, a spacecraft heading toward the moon, Mars, or any other destination in the Solar System is much like driving across the continental United States, over 2,500 miles, on one tank of gas. To accomplish this, a vehicle with a fuel efficiency of 20 mpg would require 125 gallons of gas (that’s 750 pounds of fuel!). Thankfully we need never deal with such inconveniences due to a plethora of gas stations. Likewise, building gas stations in space, i.e. fuel depots, for refueling spacecraft in low-earth orbit would incur significant mass savings and/or increase the maximum allowable payload for a given mission.

My research focuses on developing proof-of-concept expulsion bladders for guaranteeing vapor-free transfer of cryogenic propellant from such a depot. In comparison to traditional technologies that manage propellant transfer (e.g. vanes or sponges), expulsion devices could expel propellant at higher mass flow rates than vanes and sponges, possess less operational complexity than gallery arms, and better insulate the propellant from heat leaks. Bladders function by storing propellant within a plastic bag. Pressurizing the bag exterior crumples it and mechanically pumps out the propellant. Whilst polymers lose much of their ductility at cryogenic temperatures, this issue may be circumvented by forming a plastic bag into a compliant mechanism (e.g. an origami bellows) that restricts deformation to the elastic regime. Thus, an origami bladder may survive numerous propellant transfers before tearing.