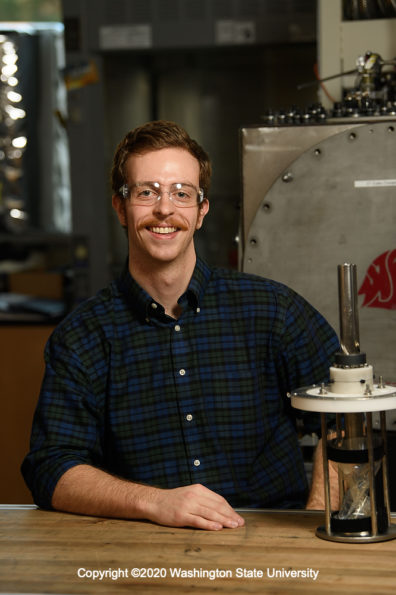 “Because of you, we’re conducting our first liquid helium tensile tests in over twenty-eight years.” My mentor told me in the hi-bay of the National Institute of Standards and Technology (NIST). I reacted to this praise with a sheepish smile, deflecting the compliment as luck. Yet later that day as I thought about what those words meant, pride welled up from deep within my chest. Due to my drive and passion for furthering cryogenic materials research I not only helped land myself an internship at NIST but was contributing to the science I had fallen in love with.”

Hello all, my name is Mathew Hunt and I am a Ph.D. researcher of Material Science and Engineering at WSU’s Hydrogen Properties for Energy Research (HYPER) Laboratory. My story in the lab starts around 3.5 years ago. As part of an undergraduate research workshop at WSU, we toured through various top engineering labs in the college. One such lab was Dr. Jacob Leachman’s HYPER lab. I was instantly hooked on the tough questions he asked, leaving me stuttering but curious. What is cryogenics? A field completely unknown to me, Dr. Leachman lifted the veil on the mystery that I thought cryogenic hydrogen to be. He widened my eyes and broadened my wonder to the criticality cryogenics has in creating a sustainable future for spaceflight technologies, medical devices, and the defense of our nation. I dumped question after question on him, seeing the potential this field of research had. “I MUST get into this research.” I told myself. Not even a day after the tour I reached out to Jake, and soon after was hired on as an undergraduate technical assistant.

The First Test – An Undergraduate Qualifier

I began carving my niche in the lab when asked to investigate the cryogenic tensile properties of 3D printed carbon fiber reinforced thermoplastics. These materials are being used to develop novel hydrogen storage devices for unmanned aerial vehicles used by the U.S. military. During this experience I was exposed to the rigor and difficulty that surrounds cryogenic engineering. On top of that, my eyes were opened to the gap in available cryogenic material property data. This research led me to my first publication under the Cryogenic Society of America (CSA). After this work it became self-evident that there exists a persistent need for standardized technologies to accurately and safely conduct tensile and fatigue tests of materials in a cryogenic environment.

Taking HYPER with me

The desire to improve the technology and investigate material properties led to an undergraduate internship through NIST’s 2018 Summer Undergraduate Research Fellowship (SURF) program in Boulder, Colorado. At NIST, alongside researchers Dr. Matthew Connolly, Dr. Andrew Slifka and Peter Bradley, I conducted cryogenic tensile tests of high-entropy alloys at ambient (273 K), liquid nitrogen (77 K) and liquid helium (4 K) temperatures. My work helped kick off the first liquid helium tests NIST employees had conducted in over 28 years. A year later, this work was presented at the 2019 Cryogenic Engineering Conference. Furthermore, for my contributions I was awarded the 2019 National Intern Student of the Year Award from the American Society for Engineering Education.

Jake believes that every undergraduate should leave with three freakishly awesome engineering accomplishments. For me it became critical that I met this goal before finishing my undergraduate studies. The final research project I worked on was through The Joint Center for Aerospace Technology Innovation (JCATI). This is a joint industry-university program designed to identify research needs and opportunities for technology that benefits Washington’s aerospace industry. As part of a two person team, sponsored by Blue Origin, I developed a material test stand for cryogenic fueling bladders. Fueling bladders offer a unique technique on cryogenic propellant management in a rocket while in a micro- to zero-gravity environment. This work involved the design of a flex-testing device to simulate thermal fatigue conditions that the bladder materials would undergo during operation. The most enjoyable part of this research was the combined training I received as a mechanical engineering undergraduate, and the new potential for research that exists in cryogenic material property measurement.

The Journey So Far

My undergraduate experience at WSU was a rich and diverse combination of research, academic, and internship experiences, supplying me with the tools necessary to pursue a doctoral degree in Material Science and Engineering. Currently, I am finalizing the build of the first academically developed cryogenic hydrogen load frame. Dubbed the Cryogenic Accelerated Fatigue Tester (CRAFT), this load frame will be capable of investigating a variety of polymeric and composite materials under fatigue loading in a cryogenic environment. The system is fully electric and able to fatigue-test in liquid hydrogen; a critical component to its uniqueness that no other institution can offer. My preliminary work is investigating the deformation mechanisms observed in 3D printed polymer nano-composites. This work is critical to our understanding of how to tune additive materials to maximize
performance of the system based on environmental and loading conditions.

Turn your eyes to HYPER in early Summer 2020 to see the completion of this awesome system!