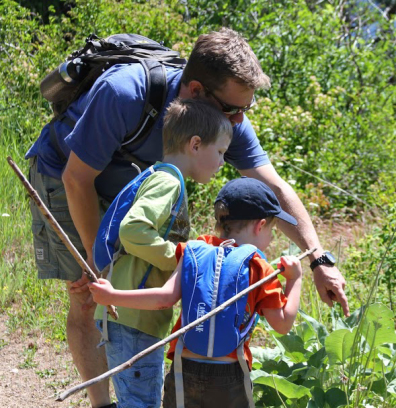 The boys and I watching spiders weaving webs.

Most datasets have an outlier. I may be it for the HYPER Lab as my path to graduate studies in engineering is atypical. I was an engineer at Boeing for 4 years after completing a BS in Aerospace at CU – Boulder. While I enjoyed my time at Boeing I had always wanted to see the world sooner than later and left the aerospace giant for India, Nepal, Africa and the South Pacific. Upon returning I decided to redirect my focus to solving environmental issues and earned degrees in Forestry and Fishery Sciences while at the University of Washington.

During that time I studied the effects of elevation and precipitation on bat species composition in Olympic National Park, studied the behavior of Steller Sea Lions in the Aleutian archipelago, and estimated fish school biomass in the Pacific Ocean from an aircraft based LIDAR system. I continued my environmental studies while earning and Environmental Science degree at the University of Idaho. While at UI I created a habitat model to predict woodpecker presence based on the structural characteristic of forests using satellite LIDAR data. While these were great experiences I missed my involvement with engineering in general and aerospace in particular.

Motivated by the successful launch of the incredible Curiosity Rover I decided it was time to head back into the engineering world and started my PhD with Dr. Leachman in the HYPER Lab. I’ve always had an affinity for the things in life that appeared to be on the fringe or were unique and the opportunity to play with cryogenic hydrogen and develop novel fuel storage systems for hydrogen fueled vehicles was a perfect fit. 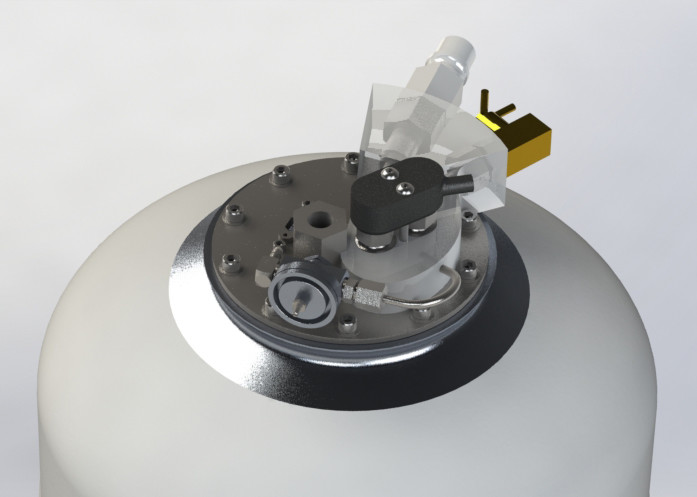 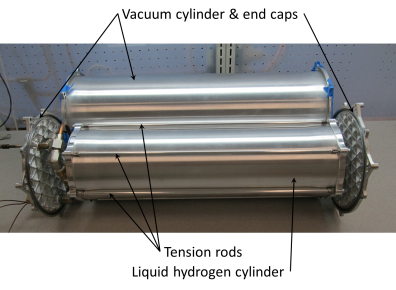 First generation liquid hydrogen fuel tank for the Genii UAV.  This is a vacuum jacketed / MLI design (MLI blanket not shown).  Designed and fabricated 100% in house. 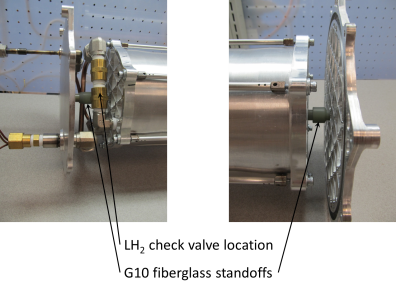 Thermal conduction into tank is minimized by use of G10 fiberglass supports.  Copper tubing is used for testing purposes only; final iteration will use thin walled stainless steel tubing to minimize thermal conduction.  Brass fittings will be replaced with a check valve for flow regulation during liquid fill. 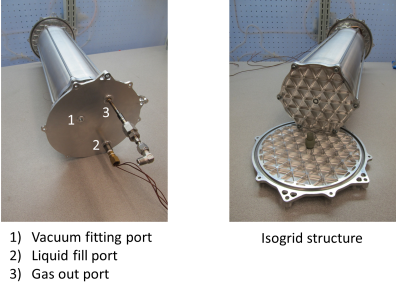 Isogrid structure provides the equivalent load bearing capacity equal to a flat plate of greater thickness.  This feature reduces structural mass while at the same time eliminating the need for hemispherical end caps, which are difficult and expensive to fabricate, to contain the pressure loads.  This tank operates at low pressure (~ 30 psig).

Current LH2 storage solutions include i) spray on or molded foam insulation and ii) vacuum jacketed designs that use multi layer insulation (MLI) to limit radiation heat effects. Foam insulation is bulky (high volume) but simpler to implement, whereas the vacuum jacketed design tends to be heavy (high mass) and more complex to fabricate. Vacuum / MLI systems achieve the highest performance when evaluated by lowest effective thermal conductivity and minimum boil-off rate metrics. However, vacuum jacketed LH2 storage tanks are currently fabricated from stainless steel or aluminum and the second vessel required to contain the vacuum doubles the mass of the tank at a minimum. The challenge is to develop a tank that is light weight, such as a foam covered tank, yet exhibits high performance by maximizing specific energy and minimizing boil-off rates like the vacuum jacketed / MLI design.

Our current emphasis is on optimizing storage for unmanned aerial vehicles for use with fuel cells which permit i) increased reliability through use of a solid state power / drive system, ii) silent operation, and iii) flight duration that approaches that of current internal combustion engine powered aircraft. Current small scale (wing span < 20’) unmanned aerial vehicles are powered by engines typically sourced from other applications and are prone to failure due in part to long duration continuous use, while imparting significant vibrational stress to the airframe and on-board payload. A solid state system contains no reciprocating mass, only the precisely balanced rotational mass of the motor armature and propellers which, while substantially reducing vibratory loads, also provides a nearly silent drive system. While the energy density (energy per unit volume) of hydrocarbon fuels is about 3.5x greater than that of liquid hydrogen, the specific energy (energy per unit mass) of hydrogen is approximately 3x higher than gasoline resulting in flight durations on the order of hours and approaching that of gasoline powered aircraft.

When using liquid hydrogen the vaporized fuel must be warmed to minimize ice build-up on fuel lines and to ensure compatible temperatures with fuel cell membranes. Heat exchangers, where not required on a high pressure gas storage system, add mass and volume to a liquid system. Our solution incorporates the heat exchanger into the tank structure itself reducing mass and volume while providing vapor cooling (refrigeration) for the LH2 inside. Performance of the vapor cooling system is increased by utilizing a catalyst in the heat exchanger that converts parahydrogen to orthohydrogen, increasing the heat capacity of the cold hydrogen gas by a theoretical 50%. Previous experiments conducted in the HYPER lab have shown a measurable increase in heat capacity of 33%. Integrating the heat exchanger creates a complex structure that conventional manufacturing methods (e.g. machining, injection molding) are not well suited for.

We use selective laser sintering (SLS) of a low density engineering polymer to create the tank liner which is then over-wrapped with carbon fiber to carry the pressure loads. A custom fueling manifold was designed to provide for liquid hydrogen filling and gas extraction. The manifold incorporates a two stage pressure relief system as well as a vent valve that is used during the fill stage. Estimated final mass of the tank system is 2.5 kg resulting in a gravimetric capacity of hydrogen to tank material mass of 14.5% and 55% volumetric efficiency. Once built, we estimate the tank with fuel will have an energy density of 4.5 GJ/m^3 and a specific energy of 15 MJ/kg.