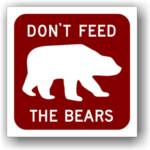 One of my good friends was talking to me about his new class the other day. He was lamenting the amount of work it is responding to homework questions of his 60+ students posted to a discussion forum. I asked him whether the students help each other out in the forum, and he said no, they wait for him to answer. To which I responded, “Don’t feed the bears!”

Having discussion forums for student questions is a great approach for engineering education, one that Chelsea clued me into when I first started teaching. The reason it works better than traditional office hours is that 1) Each question is asked and answered only once and the rest of the students with the same question are satisfied, 2) The lag time between question and response is reduced (especially between the crunch time hours of 11 pm and 6 am), and 3) The forum provides the opportunity for students to help each other, which is a community level memetic trait, and a powerful form of learning reinforcement.

Problems arise however because our dominant meme shift in engineering education across the country is legalistic-performance. In this legalistic-performance paradigm the common practice is forcing students to work as individuals on homeworks and quizes that attempt to simulate reality and to rely on 1 way professor lectures analogous to data dumps. As I’ve discussed, this approach worked well in the early days when it matched the dominant meme in society but is increasingly becoming outdated. But senior level engineering students, after being forced into this system after 4 years, become entrenched in this mindset. When given a communitarian meme opportunity to help themselves and eachother like a discussion forum, they succumb to the temptation and ask the professor for a clue, their hand to be held. Just like the bears searching for a free handout in a national park, it’s certainly not the students fault, it’s the system’s fault for teaching them that this behavior is normal and acceptable.

Now let’s transfer this. You’re a Game Warden in charge of setting up a preserve to help re-establish an endangered species (quality engineers anyone?). Do you:

1) Capture the species, place it in a cage in a zoo, force feed it what you think it eats, provide a structured play environment and allow occasional interaction with friends? Do you tranquilize it after each new interaction, strap it to a board, and measure every possible metric you can to see what helps it best? Once you’ve pumped the numbers up do you then release them into the wild to sink or swim? (a.k.a legalistic-performance approach)

2) Place informational boundaries around an area within the species’ known habitat to protect it from accidental intrusion. Quietly and careful watch the species in it’s natural system to try to identify key needs that are not being met (a new invasive species, predator-prey imbalance, water supply being cut off, etc.). If you understand the species, you’ll know when something is wrong. Then develop a scaffolding to help the species, and the rest of the species they depend on, meet their own needs. Once the numbers are back in balance, all you do is take down the signs and pack up the cameras. (a.k.a communitarian-systemic approach)

May’be the real question is: How are you teaching your engineers and which approach do you think is better for your students?