When I tell people I work on hydrogen fuel, they immediately say something very wrong like, “Are you worried about a mushroom cloud over your lab?” — Mushroom clouds are from a nuclear bomb detonation, and I don’t plan on starting thermonuclear fusion anytime soon in my lab, and if I did, it might save the planet. The other statement I often get is, “Wow, don’t want another Hindenberg!” Again, very wrong. Detailed studies from NASA and others have shown that the Hindenburg disaster was likely exacerbated, and not caused by hydrogen. The Hindenburg’s sister ship, the Graf Zeppelin flew more than a million miles for nearly a decade on hydrogen before being grounded after the Hindenberg disaster. Go in and read the studies for yourself. The Hindenberg cut several corners the Graf Zeppelin did not, and you can’t expect the hydrogen to blow-out a diesel fire. The final one I sometimes get is, “Oh, the Challenger Shuttle!” again very wrong, Challenger was caused by the failure of a solid-oxide rocket booster o-ring.

So really, if I’ve just debunked the three most common misconceptions about hydrogen ‘incidents’ in a single paragraph, how dangerous is hydrogen fuel?

“Tests were devised in which tanks containing liquid hydrogen under pressure were ruptured. In many cases, the hydrogen quickly escaped without ignition. The experimenters then provided a rocket squib (a small powder charge) to ignite the escaping hydrogen. The resulting fireball quickly dissipated because of the rapid flame speed of hydrogen and its low density. Containers of hydrogen and gasoline were placed side by side and ruptured. When the hydrogen can was ruptured and ignited, the flame quickly dissipated, but when the same thing was done with gasoline, the gasoline and flame stayed near the container and did much more damage. The gasoline fire was an order of magnitude more severe than the hydrogen fire. The experimenters tried to induce hydrogen to explode, with limited success. In 61 attempts, only two explosions occurred and in both, they had to mix oxygen with the hydrogen. Their largest explosion was produced by mixing a half liter of liquid oxygen with a similar volume of liquid hydrogen. Johnson and Rich were convinced that, with proper care, liquid hydrogen could be handled quite safely and was a practical fuel — a conclusion that was amply verified by the space program in the 1960s. At the time, however, Johnson and Rich filmed their fire and explosion experiments to convince doubters.” https://history.nasa.gov/SP-4404/ch8-6.htm

That was during the 1950’s “Project Suntan” days with Kelly Johnson as project lead (yes that fabled Johnson that started Skunkworks and led the design of the SR-71 Blackbird, among others). For whatever reason, perhaps to remove all doubt, the Air Force Research Labs (AFRL) decided to reproduce Kelly’s experiment in the early 1980’s at Wright Patterson Air Force Base. This experiment involved shooting each container with .50 caliber incendiary rounds and simulating lightning strikes. This time hydrogen (on the top) is being compared with kerosene (on the bottom, aviation fuel or JP-1). 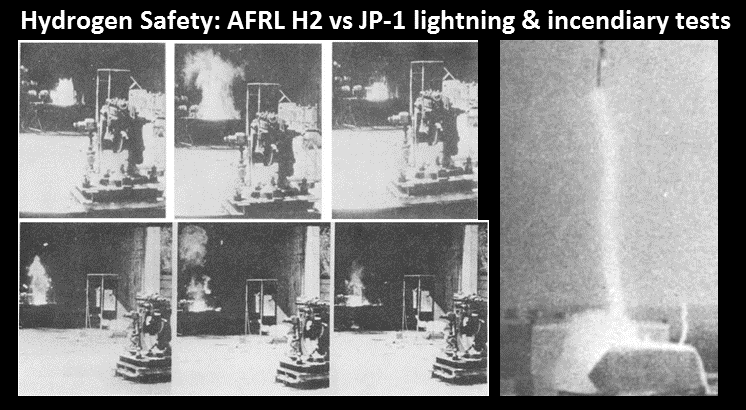 This confirmed Kelly’s findings that the hydrogen fire ball dissipated quickly, providing less damage to the structure in every case versus the JP-1 test. The lightning test was inconclusive due to the container being obliterated in each case. The end result: hydrogen is safer than aviation fuel for aerospace applications involving an incendiary round penetrating the fuel tank. if you want more info on hydrogen safety in aerospace applications, NASA has loads of documentation of the history on-line, you can also check out Daniel Brewer’s book “Hydrogen Aircraft Technology.”

Don’t believe me so far? It’s hard to believe that hydrogen can be safer than conventional hydrocarbon fuels. The following video was posted to YouTube by Aaron Harris, technical director at Air Liquide. This is the single most convincing video on liquid hydrogen safety I’ve seen:

But we’ve talked about blimps, planes, rockets, and liquid hydrogen tankers so far. How does this translate to conventional automotive vehicles? The National Highway Transportation and Safety Administration has a comprehensive report on the hydrogen safety studies for vehicles. The report reviews international research as well as US research. The report identifies one direct comparison between hydrogen and conventional gasoline vehicles conducted by the US Department of Energy. Here’s a few pictures from the study, try and guess which car is fueled with H2 and which car with gasoline: 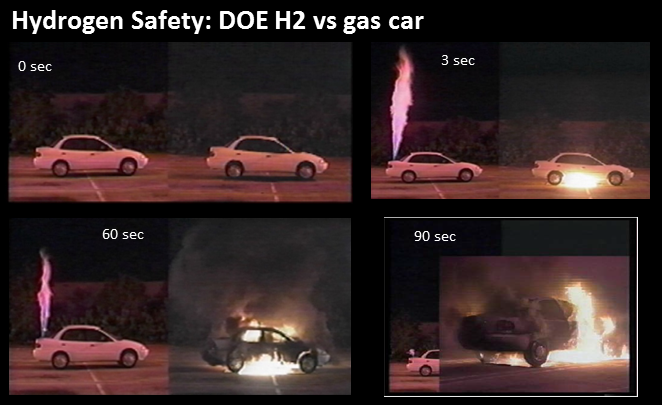 Very similar to the aerospace studies, when a hydrogen storage tank ruptures and assuming a leak ignites, a hydrogen flame tends to burn out, and up and away from the structure, very quickly. One number that I remember from an introductory hydrogen technology class is that hydrogen diffuses away at 20 miles/hour, often straight up to space. Hydrogen literally is so fast that it has escape velocity and will eventually dissipate into space and the upper atmosphere. This is one of the inherent safety features of hydrogen — it doesn’t stick around long outside of a container. So as long as you don’t capture hydrogen beneath a structure where it can accumulate in dangerous quantities, you’re probably fine. Sadly, this excludes most research labs and garages where hydrogen sensors and ventilation must be carefully considered. Thankfully hydrogen is relatively easy to sense due to it’s high chemical activity.

But what about the very high pressure within the fuel tanks? Toyota has conducted numerous studies of high pressure hydrogen tank damage and has posted the videos on line to access. Two that are particularly relevant are the tank being shot at point blank by a bullet (note that the hydrogen doesn’t ignite, which is why the airforce had to use incendiary rounds). It’s a pretty uneventful video.

The next is a rear-offset impact collision — a severe loading case on the carbon-fiber fuel tank. Any other fuel tank would crumble. Remember that these carbon fiber fuel tanks are the strongest structure in the entire car. If there was a place to put a black box in the car, it would be on, or even inside the fuel tank.

The Army decided to do their own field tests to determine whether the high pressure hydrogen storage tanks were safe for the battlefield during development of the ZH2 Colorado. They started similar to the Air Force study with armor piercing ammunition. Proceeded to a Rocket Propelled Grenade (RPG) strapped to the side of a tank. And concluded by strapping C4 plastic explosive to the side of the tank.

As you can see from the figure, if your car is hit by an RPG there will be a hydrogen flame that will dissipate fairly quickly, but the tank will remain intact. This Army group strapped the RPG to the side of the tank (a perfect hit) and ignited the RPG with C4. They had C4 left over and didn’t want it to go to waste. So they strapped the rest to the side of the tank to see if they could truly get a full on tank explosion (perhaps to simulate a high-level state sponsored terror attack). 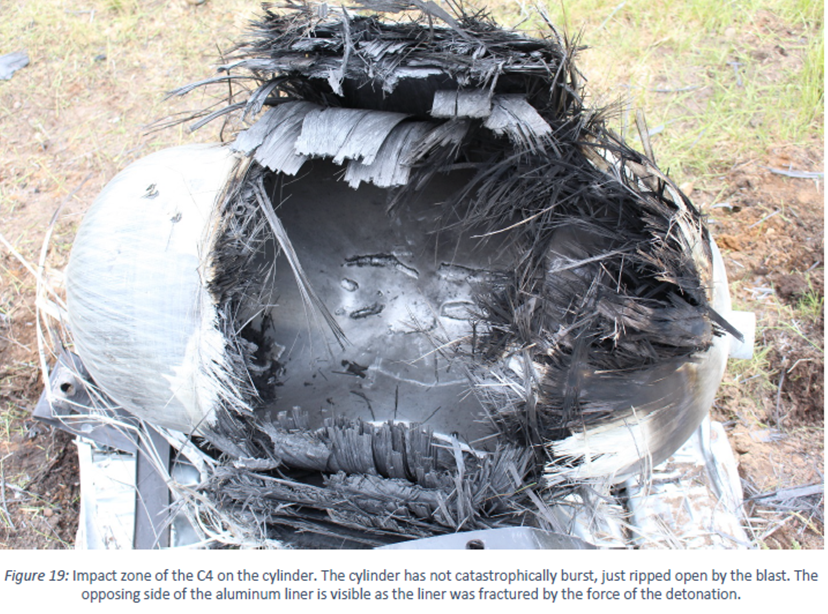 In this final case the biggest danger was shrapnel from the aluminum liner. The final sentence of the report concludes, “Storing the hydrogen at pressure will not cause any more significant safety issues than liquid fuel in the event of a ballistic penetration or explosion due to the inherently safe design of the storage systems.”

A final concern about hydrogen is that it is an emerging technology that you are probably unfamiliar with.  Do we have enough experience to use this technology safely? There are currently over 25,000 hydrogen fuel cell powered forklifts operating around the world in shipping fulfillment centers the likes of Amazon, Walmart, FedEx, and more. These systems have been in service for well over a decade and operate 24/7, having completed ~16 million refuels. Whether you knew it or not, your recent purchases were likely moved by a hydrogen fuel cell vehicle at some point during the routing to you. We just never see and interact with these vehicles. Moreover, these systems are often operated by someone that may or may not have a high school diploma — no Ph.D necessary. Still not enough? There are over 7000 hydrogen fuel cell vehicles on the road around the US. Given how much the movies like to bash hydrogen fuel (see Wonder Women, among many, many others), if there was a problem the media would have already informed us. It would be easy pickings given our embedded bias against hydrogen.

But I’ve just compared hydrogen to other fuels. What about hydrogen safety relative to lithium ion batteries like those in a Battery Electric Vehicle (BEV)? These are very different energy storage technologies, and I’m not aware of direct comparisons between the two, but we’ll try. The key difference is that a BEV cannot rapidly dissipate the energy stored in batteries like a fueled vehicle can. This means that once a cell is damaged, neighboring cells in the battery can continue to catch fire or explode at a later time. This issue has led to BEVs requiring special storage and observation after a crash. You can search for videos of first responders trying to put out a BEV that is on fire. It’s not easy and the fumes are terribly toxic. The latest article I read is not clear whether BEVs have fewer post crash fires than gasoline vehicles. This is not an admonishment of BEVs! The fact that this emerging technology is already on par or better than gasoline in terms of safety is remarkable. It would be great to see a direct study comparing BEV safety with hydrogen fueled vehicles, once both technologies have had a chance to mature.

We work with hydrogen every day in the lab. Ample opportunity for thought. I’ve often wondered why everyone has such an ingrained fear of hydrogen. I actually think the problem is convenience. Think back to your first introduction to hydrogen. Probably in a high-school or college chemistry class. Mine was in 8th grade when we electrolyzed water, filled a test-tube with a stoichiometric (ideal) mixture of hydrogen+oxygen, then lit the mixture with a match. It’s the easiest way to get a bang that gets people excited about chemistry. It’s also very impactful to see and feel the incredible energy release from such a small amount of gas. One of the most commonly watched videos of hydrogen on youtube is of a balloon filled with hydrogen and oxygen being lit on fire. But what is never added to the ends of these demos is that it’s pretty rare (and easy to engineer against) accidental mixing, within a pressure vessel, hydrogen and oxygen at the ideal ratio for an explosion. Regardless, this extreme introduction to hydrogen is embedded in our culture and memory.

So how dangerous is hydrogen fuel? In many situations where a vehicle is located outdoors hydrogen is safer than conventional liquid fuels or natural gas. This in no way implies that hydrogen is not dangerous — there are many situations where hydrogen, like any other fuel or energy storage device, can cause an accident. As one life-long hydrogen expert said to me once, “Hydrogen is no better, nor worse, than any other fuel. You just have to know the rules for working with hydrogen.” Hence our work and mission.

One final note — If you’re thinking about doing a hydrogen experiment at home, best to use caution. Hydrogen, indeed, has the highest flammability range and lowest required ignition energy of any fuel (4%-80% H2 by volume is flammable with air and a grain of sand caught in an escaping gas jet has enough kinetic energy to ignite a flow). The H2tools.org website has a wealth of information, including accident history to help guide you. Even the pros get caught in tough spots from time to time. Read about our near-miss hydrogen leak event sometime to get a feel for how very un-expected situations in complex systems can lead to risky repercussions. Regardless, with careful engineering, hydrogen fueled vehicles have a bright and safe future.