If you could solve one problem affecting the lives of everyone in the Pacific Northwest, what would it be?

What would you be willing to give up to solve it?

WSU is working to solve many Grand Challenges. The one I’m telling you about today is a $10B per year problem that’s making us sick — the importing and use of fossil fuels in Washington State.

So here is my Grand Challenge:

More specifically, reducing the importation of carbon-based fossil fuels into Washington State to less than half of the status quo by 2050, when I’m eligible to retire. 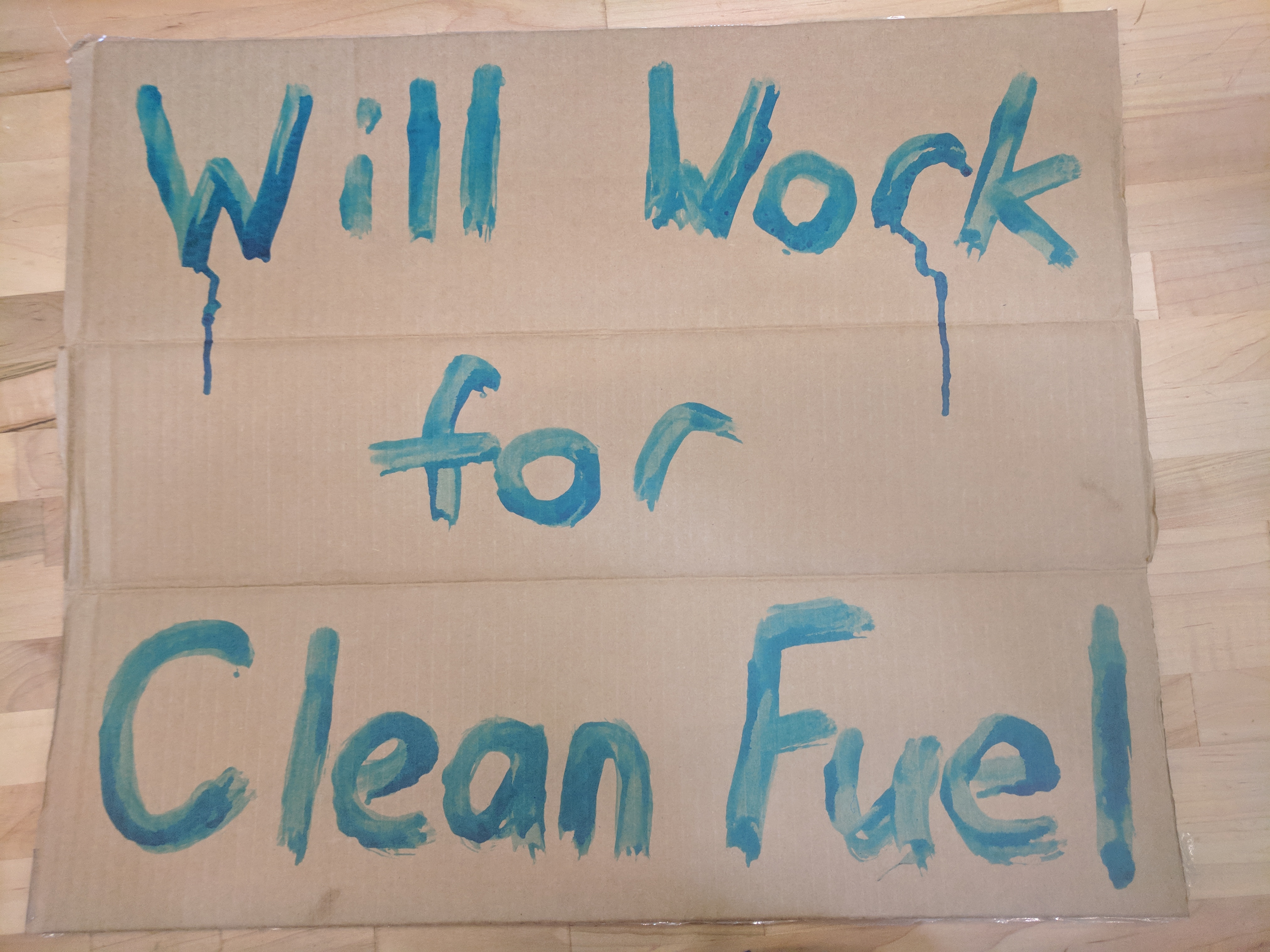 The 7,310,300 residents of Washington State own 7,872,783 vehicles that nearly entirely burn imported fossil fuels. 46% of Washington State’s primary energy needs come from petroleum resulting in nearly half of the 94.4 Million Metric Tons of greenhouse gas emissions in our state in 2013. If those emissions were solid CO2 piled on top of CenturyLink field, it would be a pile 7.5 miles tall, every year. It’s a giant scar on our state — one that funnels $$$ billions out of our state to import those fuels, the emissions of which ultimately disrupt the lifespans of us and our ecosystems.

Breakdown the big three fossil fuel imports — 141.5 million barrels of oil, 308 billion cubic feet of natural gas, and 3.5 million short tons of coal — assume $60/barrel of oil, $3.00/thousand cubic feet of natural gas, $45/ton of coal, and that’s $8.5 billion lost to oil, 0.924 billion to natural gas, and $157.5 million to coal. That’s nearly $10 billion every year that would stay here in our state if we had domestic alternatives. Not to mention the reduction in medical bills from the reduced pollution.

Moreover, an alternative like hydrogen is a primary feedstock for many chemical processes, including fertilizer, that we also import.

What will we replace Fossils with? — Electrofuels – primarily Hydrogen

More than 3/4 of Washington State’s electricity generation is from renewable sources in the Columbia basin, making Washington the 2nd largest renewable energy producer in the United States. We produce so much electricity that over half is distributed elsewhere via the Western Interconnect. Here’s a breakdown by power generation type for the Bonneville Power Administration: 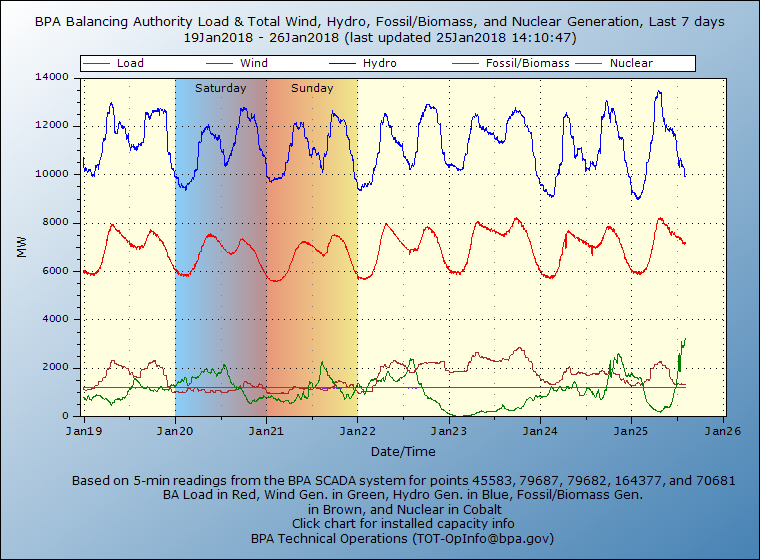 Note the monthly variation in Hydro Generated associated with spring run-off, how we vary the output of our single nuclear power plant (Thermal Generated) to adjust for the variable load, and that more power is sent to California (Net Interchange) than we use (Net Load). We see something interesting when we take a closer look at the Wind Generated. In the below right figure you see the increase in installed wind generation capacity for BPA, a nice exponential increase that hit a wall in 2012. The lower left figure, a map of Current and Proposed Wind Projects in the Columbia Gorge, shows that the limit in generation capacity wasn’t due to a lack of sites. The limit is our ability to control the daily fluctuations in renewable power supply. 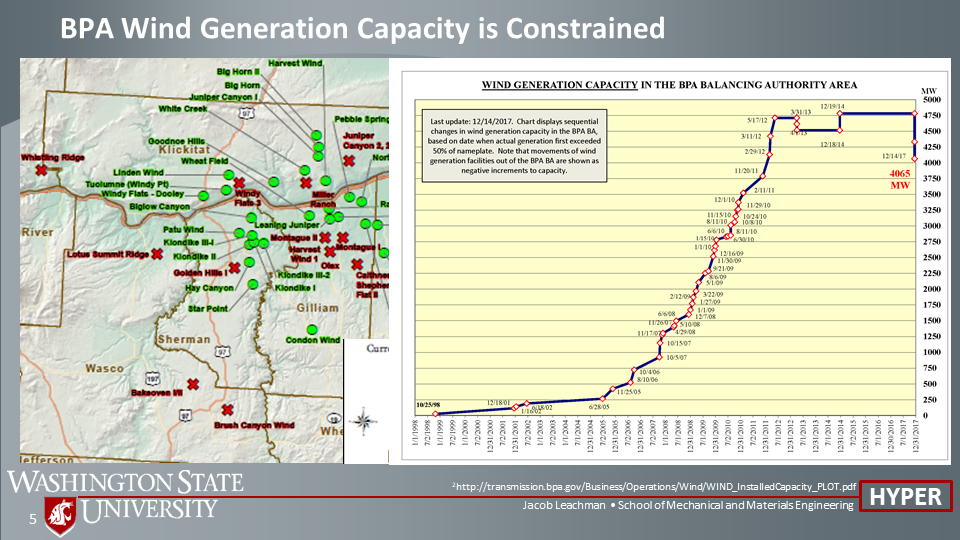 At any given moment the BPA is working to regulate the power on the grid, to keep the voltage from getting too high (light bulbs blow out) or too low (brown outs). The BPA has real time outputs of this balancing act. Here is a shot from 2016 I use in talks. You can see two points where we exceeded our limit to decrease (dec) and increase (inc) energy on the grid, which causes problems. Although there are many ways to improve incs and decs, they start becoming expensive and difficult to manage. Here’s a chart from BPA showing the difference between expected wind power and the actual. Differences between the two shows when balancing reserved had to be kicked in. 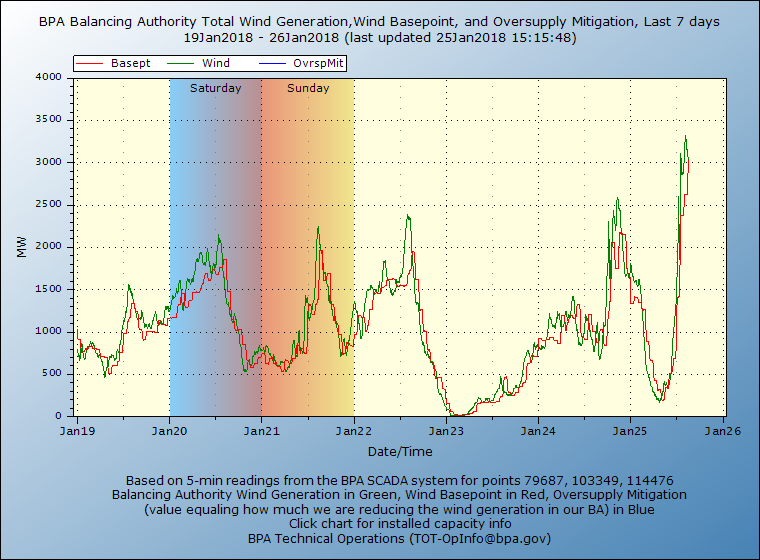 So to continue increasing the amount of wind we need to increase the amount of dispatch-able loads that can take that wind power. NREL has done the studies. Hydrogen producing electrolyzers take water and this excess electricity and are great for variable supplies such as wind-power. This storable energy form can then be used for cars, injected into the natural gas system, or stored seasonally for power production during other times of the year. 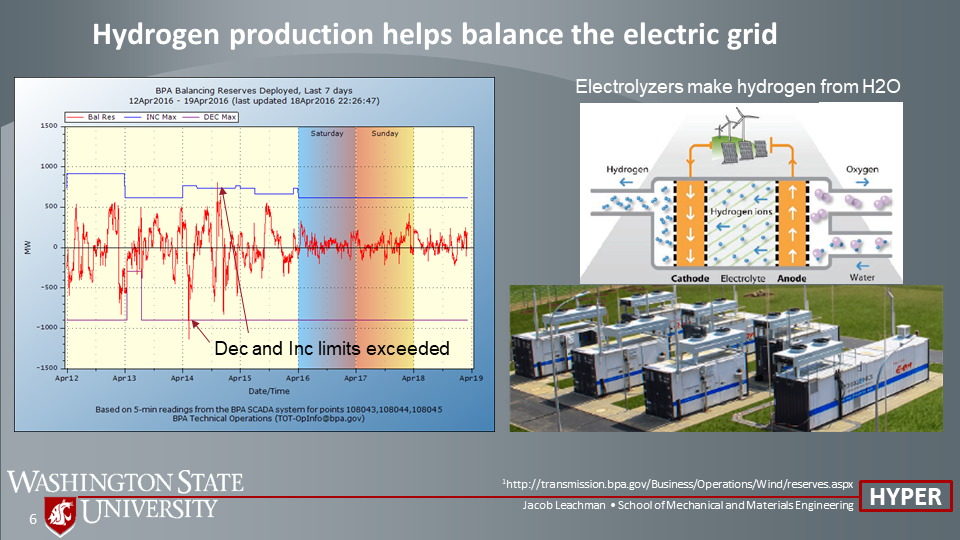 How will our vehicles change?

Washington state is making excellent strides on all electric vehicles. This requires extensive infrastructure investments to install charging stations and to upgrade our neighborhood transformers to handle the increased supply. But the investment will pay off big time! Not only will we need less fuel imports, we’ll be able to more easily balance the grid if these chargers are smart.

But like most things, this won’t solve all of our problems. I’ve written several articles about the tradeoffs between electric and hydrogen fuel cell vehicles. Most see this as an either or. But when you stand back and look at where the technology is headed, you quickly realize that battery and fuel cell technologies are synergistic and what we all want is a hybrid. Read my piece on “Toyota versus Tesla” for more. In short, the optimal is a hybrid fuel-cell battery-electric vehicle with a 40 mile plug-in battery range (easily done with rooftop solar in the Northwest or a standard plug-in outlet overnight) and a 300 mile hydrogen fuel-cell backup (perfect for getting out and running on the highways with only 3-5 minutes to fully recharge).

Sound good? Here’s how to help make it happen.

WSU-Pullman is the flagship institution in the heart of the Columbia River Basin, the 2nd largest river in North America. Our Grand Challenge is to steward the resources of this region to sustain the vitality of the Pacific Northwest. 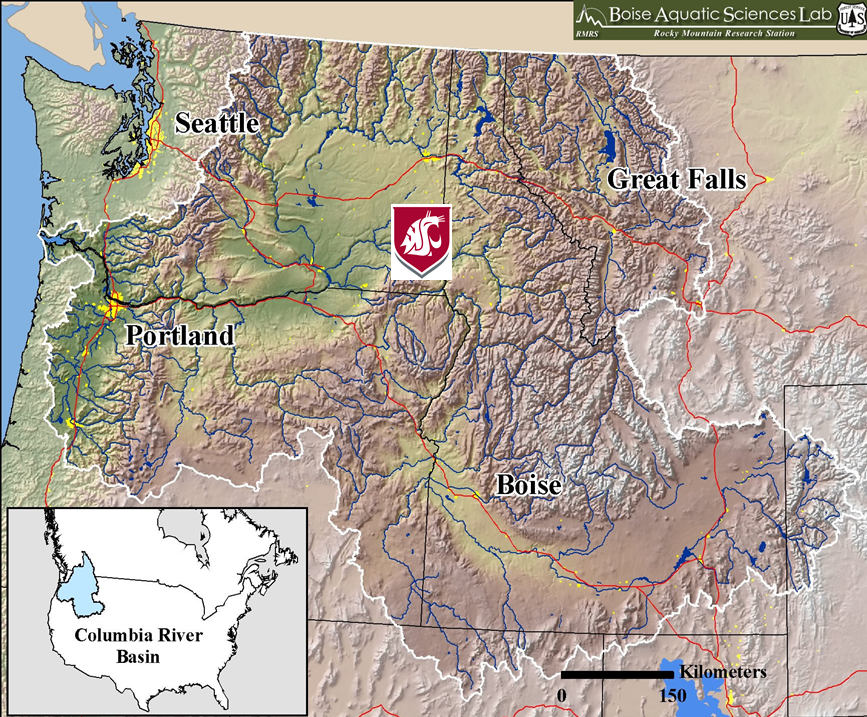 The HYdrogen Properties for Energy Research (HYPER) lab at WSU is poised to address this challenge by being the only university cryogenic hydrogen lab in the US. We are developing solutions to our hydrogen refueling challenge as exemplified by the following video:

With two top finishes in the International Hydrogen Student Design Contest , our experience developing hydrogen fuel cell vehicles like the Genii liquid hydrogen drone, alumni who have created startup companies, we uniquely have the experience to lead this energy transition for our region.

Seriously. But we need your help to do it. Here’s the link to donate. And here are many other ways to help.