This is a pre-print of my bi-monthly column ‘Cool Fuel’ for Cold Facts, the magazine of the Cryogenics Society of America.

I had a realization the other day – most of us may be incorrectly measuring cryogenic hydrogen mass flows. Nearly all types of flow meters are affected: pressure-differential, sonic, thermal, etc. The differences arise from changing thermophysical properties of hydrogen at cryogenic temperatures and more complicated for flow metering than just adjusting for temperature and pressure. Hydrogen at room temperature sourced from a cryogenic dewar can also be affected, which covers the majority of hydrogen use. In response, this column covers the basics of mass flow metering and how to correctly measure a cryogenic hydrogen mass flow.

Mass flow metering is the foundation of custody exchange. I once ran the numbers for delivering a single load of the LNG Rivers Tanker vessel and was shocked to see that an engineer’s annual salary was in the margin of error for just the density of the LNG! There are two basic choices for mass flow meters, an absolute type flow meter such as a Coriolis, or relative meters based on thermophysical properties. Coriolis meters utilize rotating or vibrating tubes and measure impedance due to the mass flow. As a result, Coriolis meters are typically better for larger scale applications with significant mass flows. The low mass of hydrogen causes reduction in sensitivities and difficulty in controls at these temperature extremes. For most of us dealing with smaller cryogenic hydrogen mass flows, Coriolis meters are not yet practical.

What if we used a non-thermal mass flow meter? Pressure differential based orifice plates, targets, and venturi meters should consider the compressibility of hydrogen (the highest of any substance). The standard equation for mass flow from a flow orifice meter with compressible flow relies on the ratio of specific heats. Traditionally assumed as constants for a fluid, the surprising result is that this ratio varies based on ortho-parahydrogen composition as well. Sonic and ultrasound gauges? Yep, sound varies with ortho-parahydrogen composition too. The figure shows the percentage variation in these properties between ortho- and parahydrogen versus temperature over the cryogenic regime. And we shouldn’t use a hot-wire anemometer to measure the composition before going to a different relative flow meter as they both suffer from not knowing the ortho-parahydrogen composition. 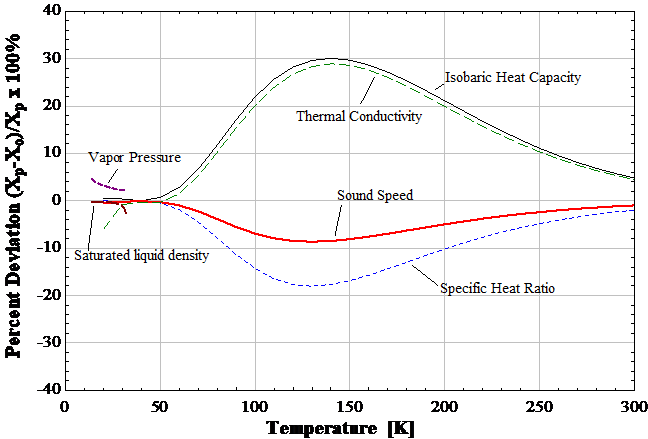 What if we just warmed the hydrogen to room temperature? Although better than at some temperatures, there are still differences between para- and orthohydrogen larger than the typical accuracies of these instruments. If we were relying on our flow meter to account for hydrogen utilization, we’d be wondering how we ended up with more than we started, or even more troubling, where the hydrogen was escaping to.

How do we measure a cryogenic hydrogen mass flow correctly? You only have a few options:

I have yet to see a mass flow meter manufactured to account for, let alone acknowledge these challenges. But with more of us looking to utilize liquid hydrogen, I’d enjoy the opportunity to help someone figure it out. And with any luck, there will eventually be a day when most are familiar enough with ortho-parahydrogen property variation that mass flow meters will be designed to auto-compensate.