Today is the completion of my first three months back at HYPER following professional leave. We are celebrating with a lab party in our new building. From graduations, to new additions, accomplishments and achievements, we have ample reasons to celebrate and reflect for the coming semester.

The most recent round of HYPER alumni has formed, and despite my leave, shown that the lab community and culture is enough to realize dreams:

Reece Adams was the first to graduate with his MS in Materials Science in May. Reece completed measurements on polymer matrix composites at liquid hydrogen temperatures necessary to determine the Factor of Safety on our 3D printed liquid hydrogen tank. The graduate student team lead last fall, Reece was the voice of confidence. He’s off to his #1 choice job at Janicki Industries.

Greg Wallace held the longest tenure in the lab. Starting as an undergraduate in the Fall of 2017, Greg may have the best understanding of ortho-parahydrogen conversion properties the lab has produced. He became the person who can solve just about any cryogenic heat transfer problem in the lab. He completed his MS in Mechanical Engineering in December and finished several projects in the lab this spring. He landed a job at First Element Fuel, the nation’s #1 retail hydrogen distributor that recently moved into liquid hydrogen. He will be key to their hydrogen R&D efforts as well as accounting for their utilization metrics.

Glynne Saelid graduated with her BS in Mechanical Engineering after a multi-year stint assisting at our Outdoor Research Facility. Glynne joined Plug Power’s office in Colfax where she’ll assist in liquid hydrogen technologies for aircraft.

Drew Boettner was the person who could test just about anything. Can’t explode tanks next door to the grizzly bears? A car muffler on a barrel did the trick. Need a novel surface coating? Drew’s on it. A serial cable connection for a novel fuel cell? No problem. Drew graduated with his MS in Materials Science after evaluating all possible leak mechanisms in our 3D printed tank. He’ll be the new Engine Test Stand Engineer (and the youngest person by at least 6 years) at STOKE Space Technologies.

Chelsea Crabb completed the fastest MS in Mechanical Engineering in HYPER laboratory history. Having worked in the lab as an undergrad for 1.5 years, Chelsea took an offer to complete graduate studies in a leading research institute on campus. However, after completing her coursework she realized that HYPER was what she needed. She rejoined the lab last October, quickly became the lead operator of our deployable hydrogen liquefier, and solved the mystery of our 3D printed tank performance. She landed her dream job as a Fluid Engineer for New Glenn at Blue Origin.

Stasia Kulsa was second in line to Greg for longest tenure in HYPER. Stasia started as an undergraduate in 2018, graduated with her BS in Mechanical Engineering in 2020, but continued working with the lab during her MS in Musical Performance with the flute. Stasia was the creative spark in the lab and our liaison to the Harold Frank Makerspace. She landed her dream job as an Acoustics Engineer at Blue Origin.

Alaina Duskin was our first HYPER Communications Manager. Alaina consolidated our social media presence, compiled two 1,000+ page reports for our tank and deployable liquefier, wrote several brilliant technical blog posts, and completed the design and renovation of our new communications/conference room. Although yet to graduate from WSU, Alaina’s position was tied to a project that had to end and she will be missed.

Owen Boreson was our first HYPER laboratory accounting intern. Owen assisted Mark Parsons with laboratory purchases and procurement during the largest phase of expenditures in laboratory history. Owen’s position was tied to a project that had to end and he will be missed.

We ran our first team of high schoolers in the lab this summer with Tanner Beckham, Elayne Watts, and Kena Debebe. They were challenged to learn the principles of Lean Manufacturing while setting up our new manufacturing spaces. They brought a youthful enthusiasm to the lab and can-do attitudes that made the largest difference of all towards setting up our new space. They will take the principles of Lean Manufacturing with them into other majors in college.

Although the lab is still reducing in size to form a solid foundation for growth with the upcoming Hydrogen Investment Act, we have made a few key additions.

Yulia Gitter is a rock star (but we already knew that). Yulia invented the decisive fix for our 3D printed hydrogen tanks that resulted in a novel invention disclosure. The hardest worker in the lab, Yulia was pivotal for our successful liquid hydrogen drone flight earlier this week. Can’t wait for her PhD.

Caleb Stauffer, a former marine combat engineer and test stand operator at Blue Origin, has taken over running the HYPER lab’s service center capabilities. Caleb still has several years on his undergraduate degree through the VA’s assistance program and will be the steady hand keeping our service center operations churning for some time.

Liam Turner is HYPER’s first visiting Fulbright Scholar. He is pursuing his PhD in Chemical Engineering at Monash University in Australia. Liam has a passion for hydrogen and growing the Australian Cryogenics community. He will be with us through March of 2023 continuing CHEF operations while Jacob Lesauis is interning at Blue Origin. He will also become HYPER’s first international representative.

We achieved the pivotal accomplishment of our Department of Defense project to develop liquid hydrogen fueled drone capabilities. We succeeded in operating a deployable hydrogen liquefier to generate hydrogen from water and liquefy it for an aircraft in the field, transferred the liquid hydrogen into the world’s first 3D printed liquid hydrogen fuel tank, and completed the first liquid hydrogen test flight of a drone in this class. The team threaded a needle to get the test completed despite inhospitable conditions at the test location. The culmination of 10 years of development effort for liquid hydrogen drones. We could not be more excited for the future of this revolutionary capability. More news on this is pending.

Our HYPER laboratory workshop series has been a huge success. The level of baseline knowledge in cryogenic and hydrogen systems across the lab made a huge advance. We plan continuing and expanding these workshops into the future. They ensure that a student from HYPER has a reliable knowledge foundation.

We are nearing completion of our move into the new building before high-level tours in September. Transitioning an industrial space into a research laboratory is never easy. The engineering design work has been completed and the test facility move timings will be finalized over the next two days. We are getting close, despite pandemic, despite supply chain, despite not enough people, despite the support systems…

We held our first celebration in the new building. Unprompted, the students took the initiative to arrange the tables into a single line so they could all eat together. This, THIS is the HYPER we’ve all been waiting for. Thank you for following along, participating, and supporting! 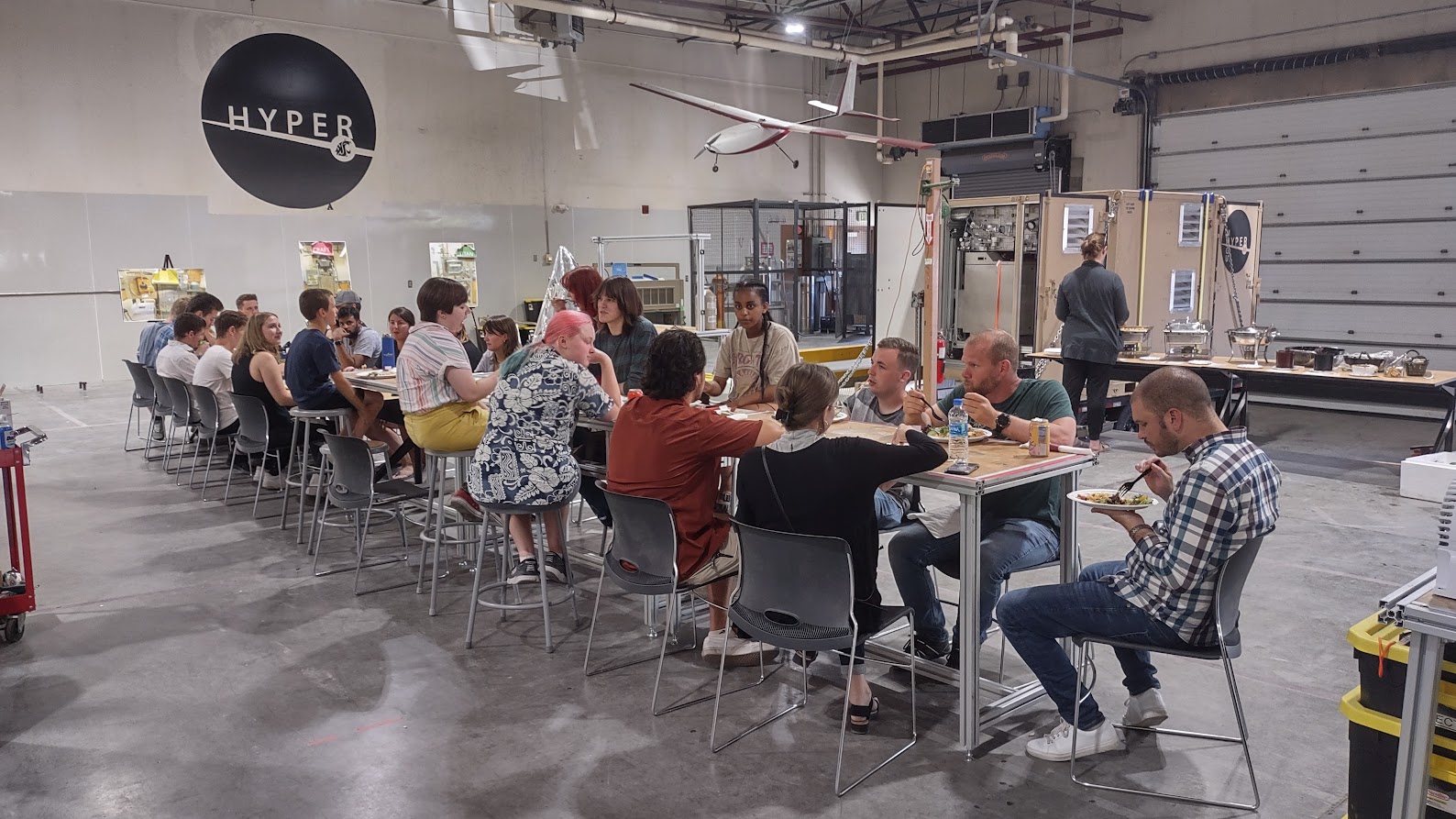