In a previous project, WSU Faculty Member Dave Torick worked with a PeaceCorps volunteer to develop a rock crusher for a Ugandan village. Recently, Maranie from The Project to End Human Trafficking found Dave’s prior work and is interested in reigniting the project to design a Rock Crusher to aid women in Uganda. We’re now working with the guidance of WSU Professor Chuck Pezeshki, who has significant experience in humanitarian design challenges, to take a new angle on the problem.

We’re working with someone in Uganda, we’ll call her Becky. She developed the following statement of need:

The need for rock crushing machines for the women not only in Mukono district, but also in other areas of Uganda is not in question. Women spend longer hours or days in the dust and under the scorching sun crushing stones of any desired sizes with small hammers. The breaking of stones or rocks from the parent rook also takes a lot of energy whereby at least hammers of 20kg or 18kg are used by men to break the rocks from the parent rock. Sometimes if the parent rock is too hard; they employ the use of heat generated from burning fire wood.

People’s standards of living in Mukono and other areas cannot be increased and level of dependency of women on their poor/ authoritative and controlling husbands and charity organisations will not be reduced due to slow businesses and the fact that people still have to spend longer hours or days crushing stones to fill up a forward truck or the size of an Elfu truck yet rock crushing is one of the major economic activity people depend on in Mukono district.
Rock crushing machines in this case are seen as tools that will greatly empower the women, make their work more enjoyable, easy and also give them the ability to crush more stones in just a few hours; meaning that with the use of machines, women will always have stones ready for sell giving them the ability to make more money and ability to compete with others in the same business. 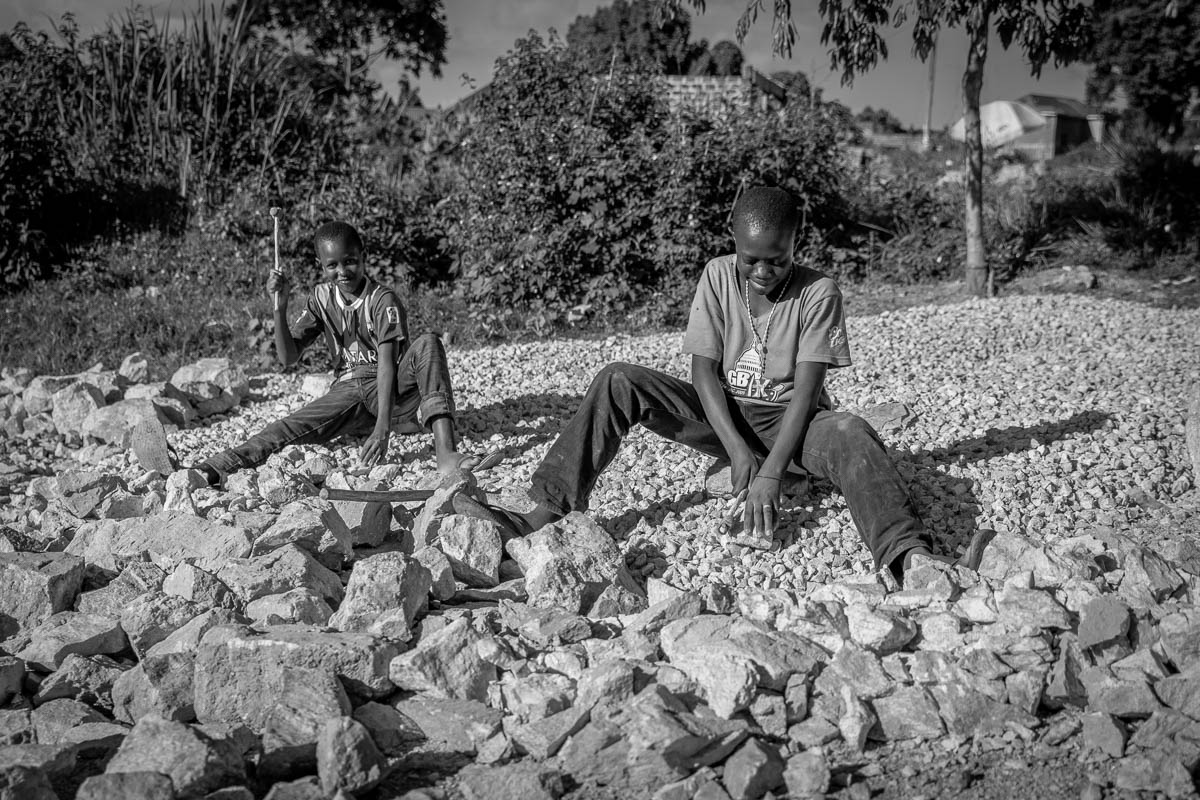 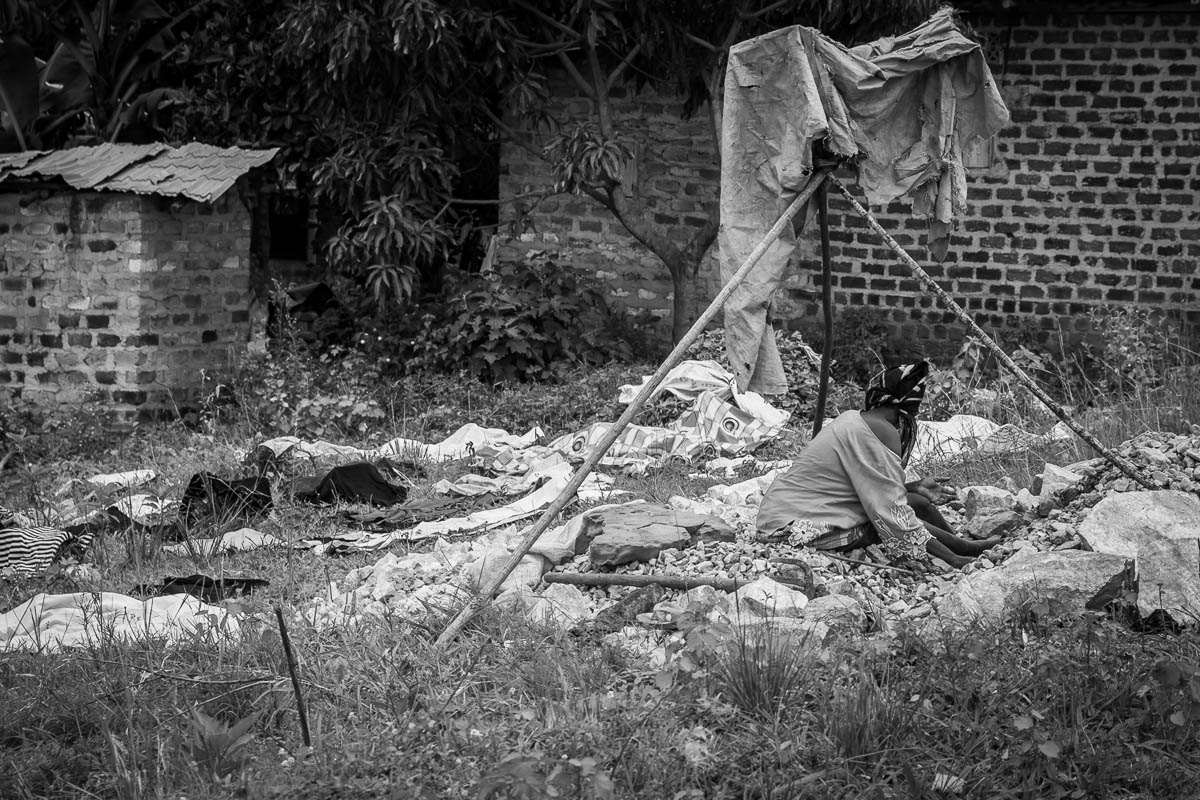 QUARRY PIT OWNERS
It is advantageous to own a quarry pit; because you are able to be your own boss; you are able to save some profits after a sell; you are also employed throughout the year- as long as you want to work.
The disadvantages are; during rainy season, there is always need to drill out water from the quarry pit, which is quite expensive because if it rains for so long, quarry pit owners will have to abandon the quarry business for some time until the rainy season ends; also business will depend on whether the quarry pit owner is able to find market for the crushed stones; the quarry owners also face a problem of soil falling back into the quarry pits, meaning they will always need to pay someone to remove soils for them especially during rainy seasons. And lastly, some quarry pits are dangerous; one might lose life that is if they get covered by the soils.
Quarry pit owners normally pay about 20,000 (less than $10) or 15,000 Ugandan shillings (less than $10) to strong men to break the rocks for them from the parent rock; one gets paid 20,000 Ugx-if they break rocks that fill up a big forward truck or 15,000 if they break rocks that fill up an elfu small truck. This process involves digging deep down into the soils to find rocks that are covered by the soil s-so they use shovels, and hammers that weigh 20kg or 18 kg, and they also sometimes use the heat from burning firewood to weaken the rocks-so that they are able to easily break them. 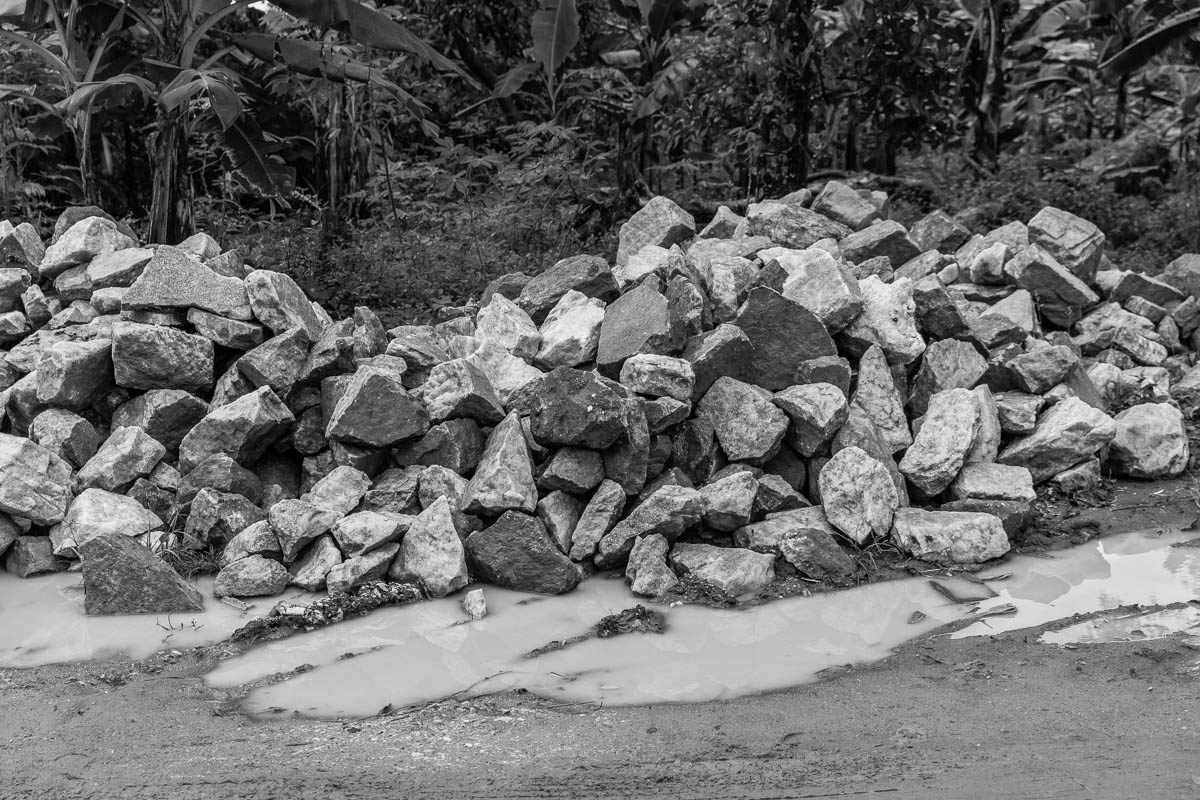 The rocks broken from the parent rock are then brought to the surface where the women can easily crush them into smaller needed sizes; the people hired to carry the rocks to the surface are also paid and the amount paid depends on the depth of the quarry pit, but normally the amount paid cannot exceed 150,000 Ugandan shillings (Ugx)-which is less than $10.
The process of hitting the rocks into desired sizes then follows; the sizes include; quarter inch (normally used to build the beam of a building); half inch (used in the construction of floor); hardcore (normally put in the foundation of a building) and the slate (used like the tiles). The slate is cut by specific machines. The preferred rock type is the steel rock. 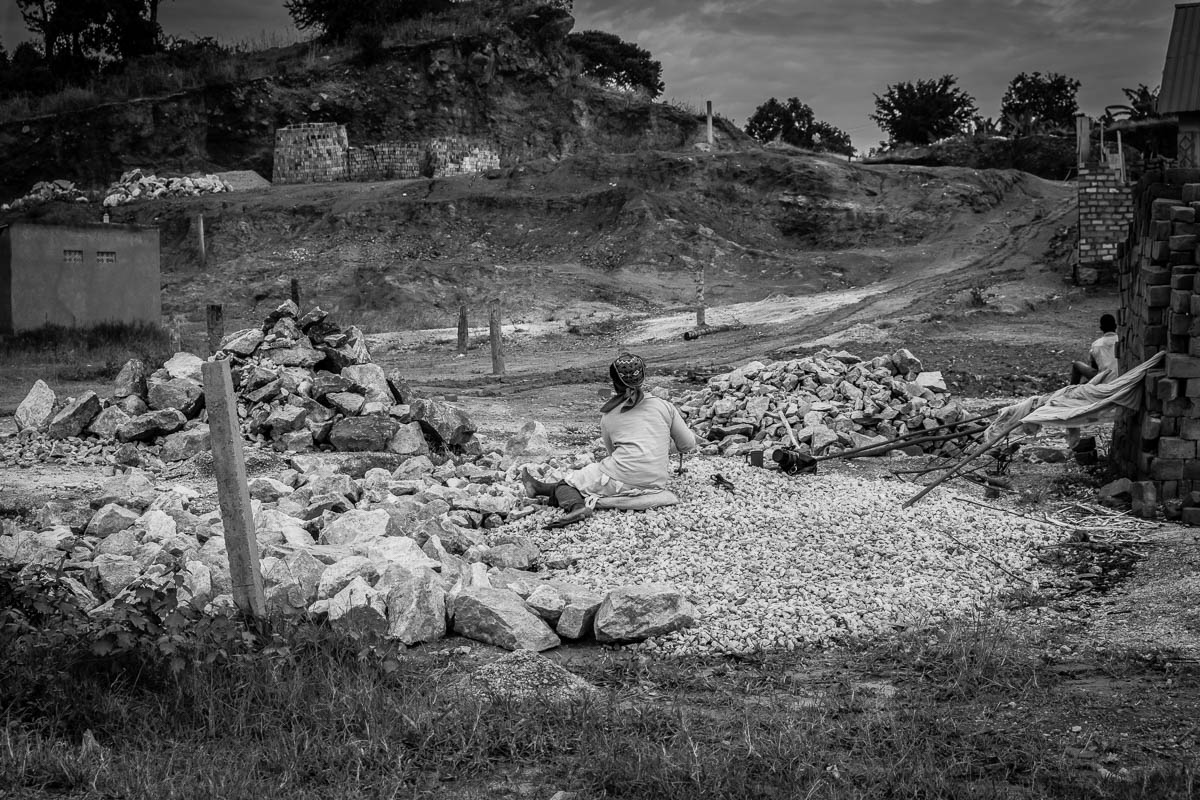 The people hired to break rocks in different sizes are paid according to the number of jerry cans they fill with rocks and each full jerry can goes for 300Ugx for quarter inch and 200Ugx for half inch- less than $1. Over 180 jerry cans of rocks fill up a big forward track and 110 jerry cans fill an elfu small truck.
When it comes to selling; the quarter inch rocks that fill up a forward truck are sold at 140,000Ugx ($42) and quarter inch that fills up an elfu truck sold at 100,000Ugx ($30). The Half inch that fills up a forward big truck goes for 100,000Ugx ($30) and 70,000Ugx $21) for an elfu small truck.
Customers come from all over Mukono district-those in need of rocks for construction of their houses. 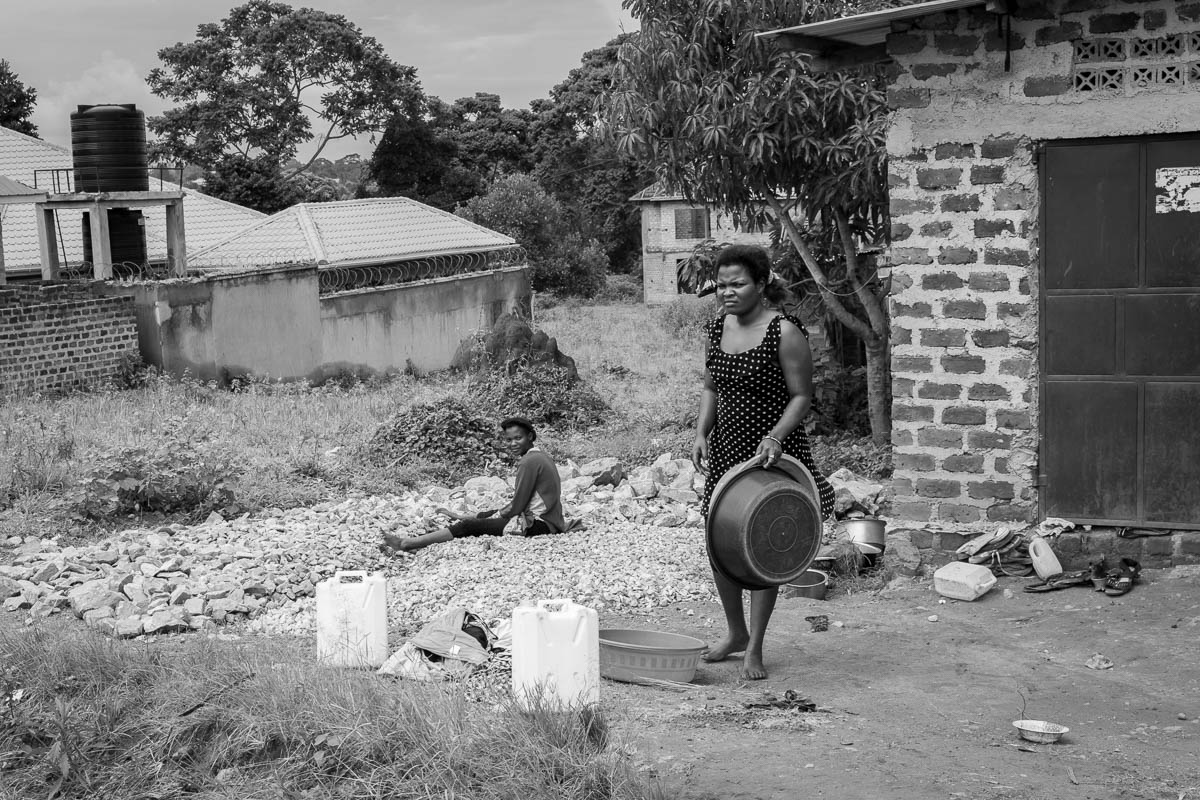 AVAILABLE RESOURCES;
The resources that I think can be helpful in the entire process are;
1. Water (in reach)
2. Fuel
3. Welders (in reach)
4. Electricity (expensive)
5. Space
6. Bicycles and spare parts shops available

TARGET;
Our target is to have a rock crusher that will be used by the majority of the women who don’t own parent rocks, who mainly work for other people using small hammers to crush rocks into small desirable sizes. The plan is to empower them through the peht- women group- through this process;
– A group of at least 3 to 4 women work/operate on one rock crushing machine to crush other people’s rocks (customers mainly owners of parent rocks) into their desirable sizes; the collected money will be used to pay them daily, machine maintenance, buy any other resources for use in the machine and also save in the women’s SACCO (Savings and credit cooperative) so that they can have access to loans with low interests and start-up their own income generating businesses.
Type of Rock; The most preferred rock is marble (Metamorphic rock)- the white is the best valued, though the locals named it steel.

What is clear from this statement: we have a substantial SYSTEM design challenge on our hands– a good rock crushing machine will simply get stolen. We need to engineer a system that can quickly and easily make new rock crushers from easily available parts. The goal, as Becky put it over the phone, is a “circle”, i.e., a community of people that can create a sustainable system for making the machines, servicing the machines, using the machines, and owning the rock supply chain.

For the ME 316 gang, we have a Skype interview with Becky on Monday where we will begin developing our House of Quality.

Information for the Crusher Input design process can be found here.

Information for the Power Input design process can be found here.

Information for the Sizing and Sorting design process can be found here.

Information for the Transport design process can be found here.

Information for the Manufacturing process can be found here.