I’m researching case studies to apply the Social Thermodynamics framework and stumbled upon an interesting find. Walter Scheidel, a renown author and Professor of History at Stanford University just published the book “The Great Leveler: Violence and the History of Inequality from the Stone Age to the Twenty-First Century.” A nice summary is given in this article in the Atlantic.

Wealth inequality is closely connected to social thermodynamics through the property Temperature, which is analogous to resources. It’s time I really explained what temperature is from a thermodynamics standpoint and how it relates to societal imbalance as Professor Scheidel has presented.

As covered in the wiki:

“Thermodynamic temperature… is directly proportional to the mean average kinetic energy of a specific kind of particle motion known as translational motion. The thermodynamic temperature is a measure of the average energy of the translational, vibrational, and rotational motions of matter’s particle constituents. The full variety of these kinetic motions, along with potential energies of particles… contribute the internal energy of a substance.”

There are other insights that occur at the molecular scale. The molecules in the thermometer and subject are likely very different — they rotate, vibrate, and translate in totally different ways but they reach an effectively equivalent kinetic energy. That said, not all molecules are at the same exact energy — the molecules have a statistical distribution of speeds and temperatures that have equilibrated. Here’s a gif-annimation of a classic Maxwell-Boltzmann distribution of speeds for a helium gas resulting in a mean effective temperature. From the video you see that molecules have a fair amount of attraction when far apart, repulsion when close together, and a comfortable distance described by the minimum in the curve, much like people. This property of atoms and molecules is known as the Inter-Molecular Potential (IMP) and is often described by a Lennard-Jones approximation. 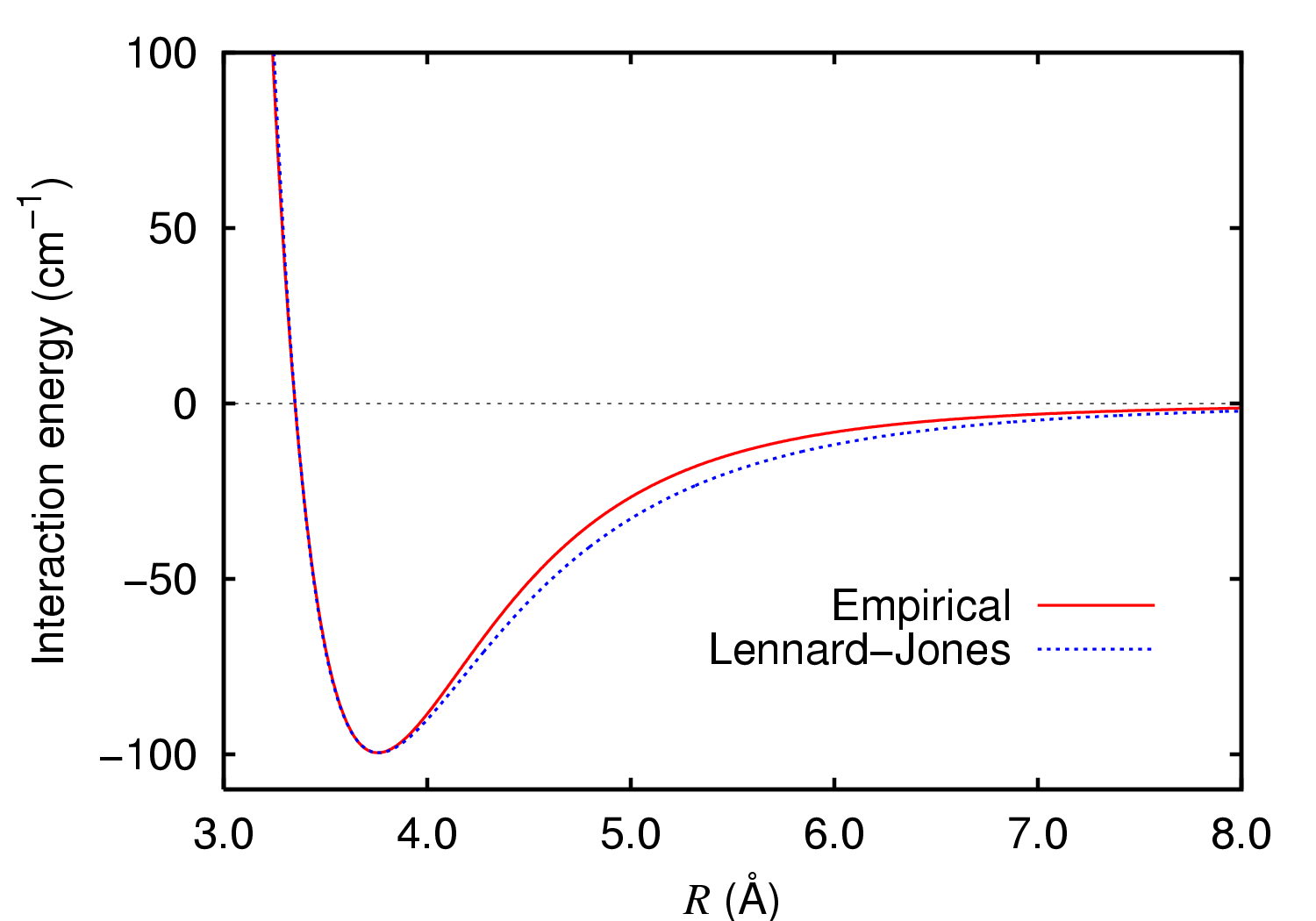 As you can see from the gif, and the IMP plot, atoms and molecules interact all the time with little bias. Faster moving molecules interact and transfer energy to their slower neighbors, causing a continual distribution around the equilibrium thermodynamic temperature, shown in the next figure as the classical Maxwell-Boltzmann distribution. Bimodal and discontinuous distributions of temperatures among molecules indicate non-equilibrium states. Nature works to minimize these gradients and increase entropy back to a broad distribution among states — now we can get back to the issue of wealth inequality. 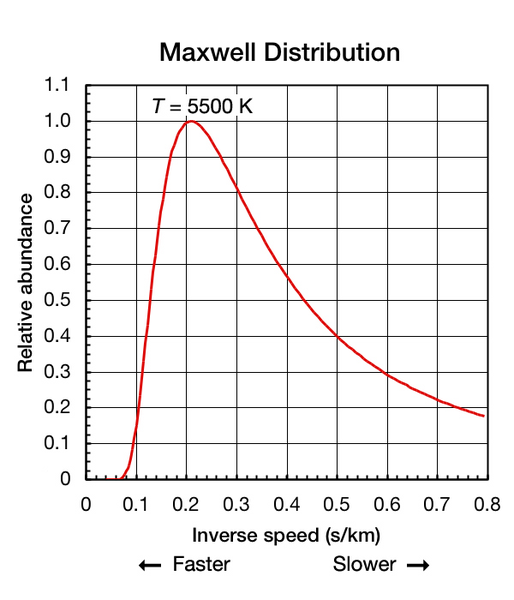 Thermodynamic temperature makes intuitive sense in social thermodynamics space. The more resources you have the more values and value systems (analogous to internal energy) you need to keep track of. Higher temperature provides a higher number of accessible energy states, and broader distribution among states (entropy and empathy) you’ll have access to.

This is where things get interesting. I showed above that at the molecular scale, nature tends to minimize non-equilibrium temperature distributions simply due to interactions among molecules — faster molecules transfer energy resources to slower until an equilibrium statistical distribution is reached. This exchange is governed by a simple set of non-arbitrary laws. In social space, humans can castle themselves and their resources away from the cultural fluid in ways that atoms and molecules cannot. This drive toward non-equilibrium states is likely a key trait that differentiates biological systems — reference this article showing how life springs from entropy. This difference in life systems will likely result in more complex inter-human potentials in the social thermodynamics framework. On an ensemble scale though, the more inequality in the distribution, the stronger the potential drivers back towards equilibrium. The more extreme the inequality, the higher the likelihood that the return to equilibrium is a dramatic event.

Professor Schiedel has identified four primary mechanisms for dramatic wealth redistribution in human history and his analysis is sobering:

All of these events resulted in a system-structural change in the cultures and an increase in empathy — the realization that we are not all that different and that indeed humanity needs humanity. This increase in empathy (social entropy) goes hand in hand with wealth redistribution towards a new equilibrium. Here’s a historical plot of wealth inequality in Western societies and an associated article in VOX. Here’s a similar piece by Dr. Chuck. 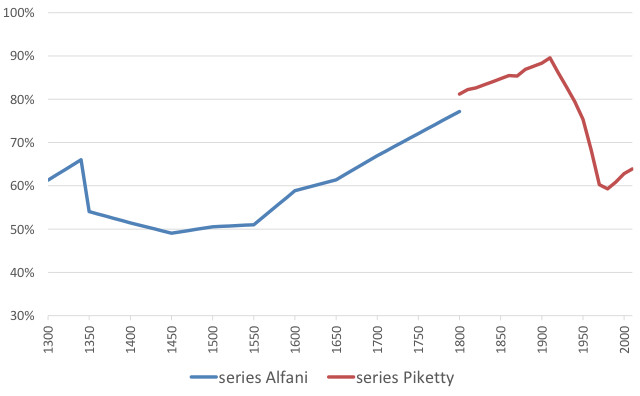 I will argue that Professor Schiedel’s conclusions require big caveats. Like many who predict the rise and fall of civilizations (many even using thermodynamic arguments), these arguments are based on our history, not our future. As we’ve increased the resources (temperature) of civilization, we’ve awakened totally new modes of interacting and being. The average thermodynamic temperature of society has increased immensely over the last several centuries. While the modes of old are still readily accessible, modern society will change phase and interact in fundamentally different ways than societies of old.

Communitarian v-Meme societies, predominantly in Europe, have implemented tax codes that limit wealth inequality. No need for catastrophe! It’s likely not a coincidence that many of these countries are considered the happiest by polling of citizens — they primarily value community! That said, it is very difficult to progress a population’s v-Meme outlook to this point — especially populaces depressed due to income inequality. It really depends on what your society is trying to acheive!

We now see the analogies between thermodynamic temperature, wealth distribution, and a society’s primary value set. Taking the examples provided we can start applying the social thermodynamics framework to see if we could have predicted the historical changes. Stay tuned!