“Gentlemen, we’ve run out of money; now we have to think.” ~Winston Churchill

If you’re reading this, it’s because of science and technology.

You know someone who is not reading this, but should, and is looking around themselves at a room enabled by science and technology, thinking they’ve never benefited from science or technology. It’s time to have a conversation with them.

It’s no longer possible to get away from science and technology. We simply no longer have the knowledge, stamina, or natural resources to go it alone as cavemen — you’d likely be dead in a month.

So really, if science is so important, what does the science say about how important science is? Moreover, how do we here in the US get the funding often necessary to advance science and technology? Finally, how do we ensure a return on those funds to the American taxpayer? This is the money talk.

How important is Science and Technology?

This is the money talk. So I’ll use money as the justification.

“While only four percent of the nation’s workforce is composed of scientists and engineers, this group disproportionately creates jobs for the other 96 percent.” ~Robert Solow, Nobel Prize in Economics ‘87

Go ahead and try; think about your job, or any job for that matter, and try to understand what or if it would be without science and technology.

So if science and technology really is that important, how are we supporting basic science and technology in the US? Let’s go to the charts. These have been developed by the non-partisan National Academies and the National Science Foundation, who keeps records of this. Granted these are dated, but enough to see the trends. First up, US R&D Spending by Source: 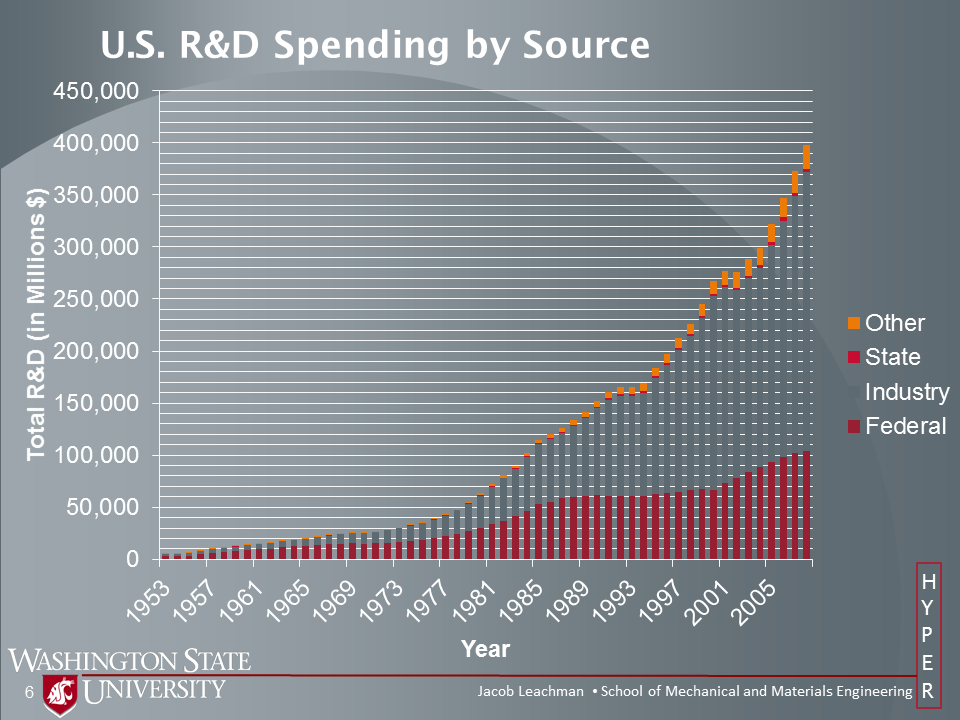 You’ll notice a strong upward trend. The overall output of the US, measured by Gross Domestic Product (GDP) increased 7x from $2000 BILLIONS in 1978 to over 14000 BILLIONS in 2010. The chart above increase roughly 7x over that same period but in MILLIONS. The percent of our GDP spent on science and technology has declined from 3.5 % in 1978 to 2.8% in 2010. That’s a decline of 60% over the last 40 years. but it gets worse when we dig a little deeper. Notice that the majority of the increase in funds has come in Federal and Industry spending. Let’s breakdown where these funds are going. First the Federal: 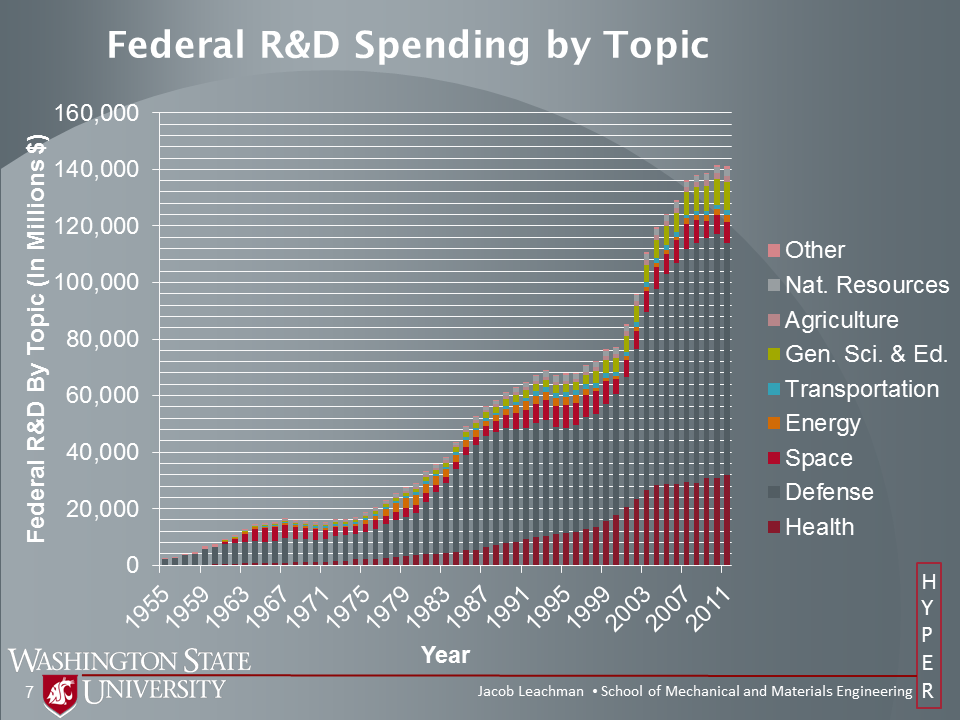 The only topics that have seen a significant increase are defense and health, which are arguably predicated by the other sectors. Think we invest heavily in Energy R&D? We spend HALF has much now was we did 30 years ago. We can solve our energy problems but it will take investment. This all could be fine and industry will take care of the rest right? To understand how industry is investing funds, we need to understand a spectrum for technology development. The spectrum we use was developed by NASA in the 1960’s and is known at Technology Readiness Levels (TRLs). Pretty much every branch of the federal government now uses a similar TRL classification for awarding funds. 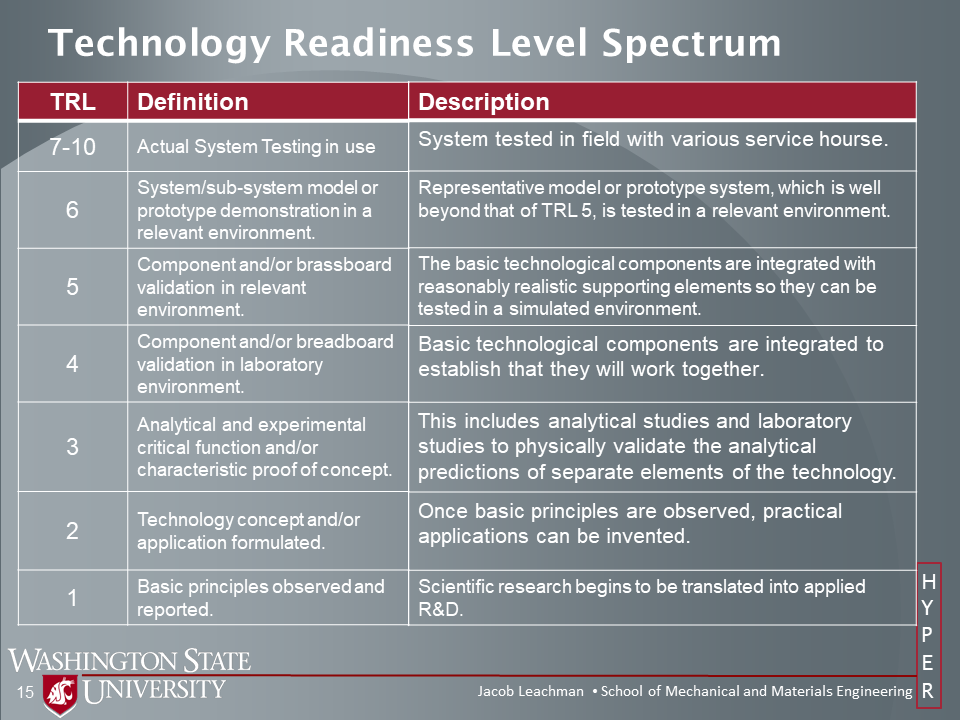 As you can see from the spectrum, you should not just place any technology in the hands of the general public if it is not ‘ready’ (TRL 7 and above).  This spectrum is also useful for helping people decide where they want to work in life. Universities tend to function at the lowest (TRL 1-4) which is often called ‘basic’ or ‘fundamental’ research. National laboratories (and to an increasing extent universities) tend to exist in the middle (TRL 4-7) which is also known as ‘applied’ research and development. Industry tends to support ‘developmental’ or ‘field’ work on products that are already out in the general public (TRL 7-10). It is tempting to view this as a linear process where the university discovers something and writes a report. The report gets handed to a national lab that develops it and writes a report. That report gets handed to industry who then makes a product out of it. But this should NOT be viewed as a linear or waterfall process. It’s actually non-linear, highly paralleled, and cooperative. Here’s how a breakdown for TRL level projects would apply to student work. 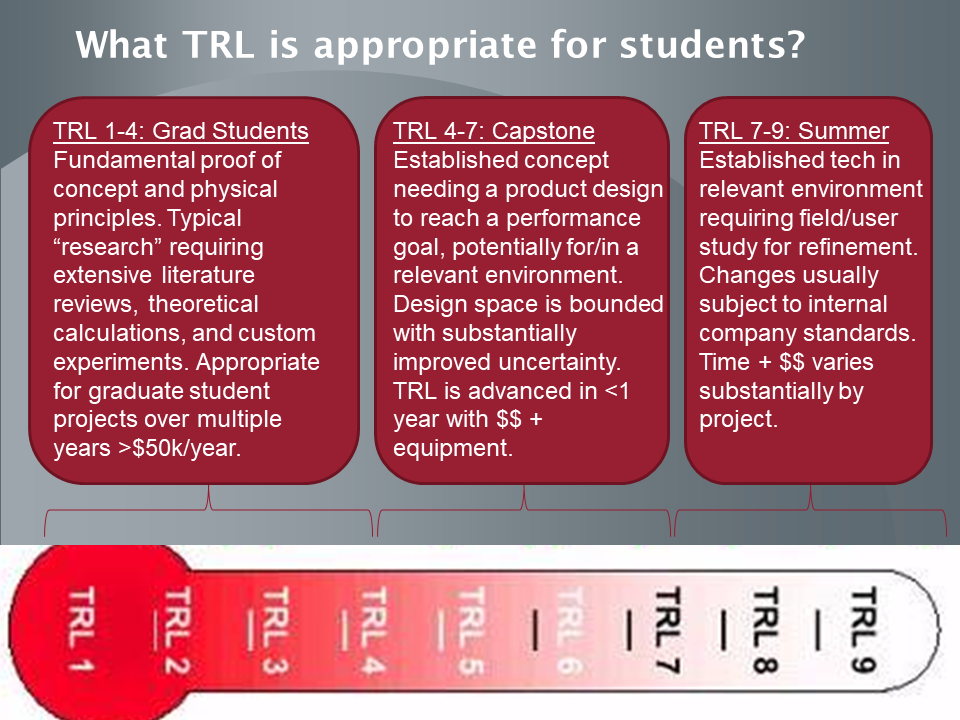 From this you can start to see the complexity of the technology development pipeline and how many actors are working at once to try to advance technologies, using the R&D funds already alluded to. Now let’s start to breakdown where those R&D funds are going. 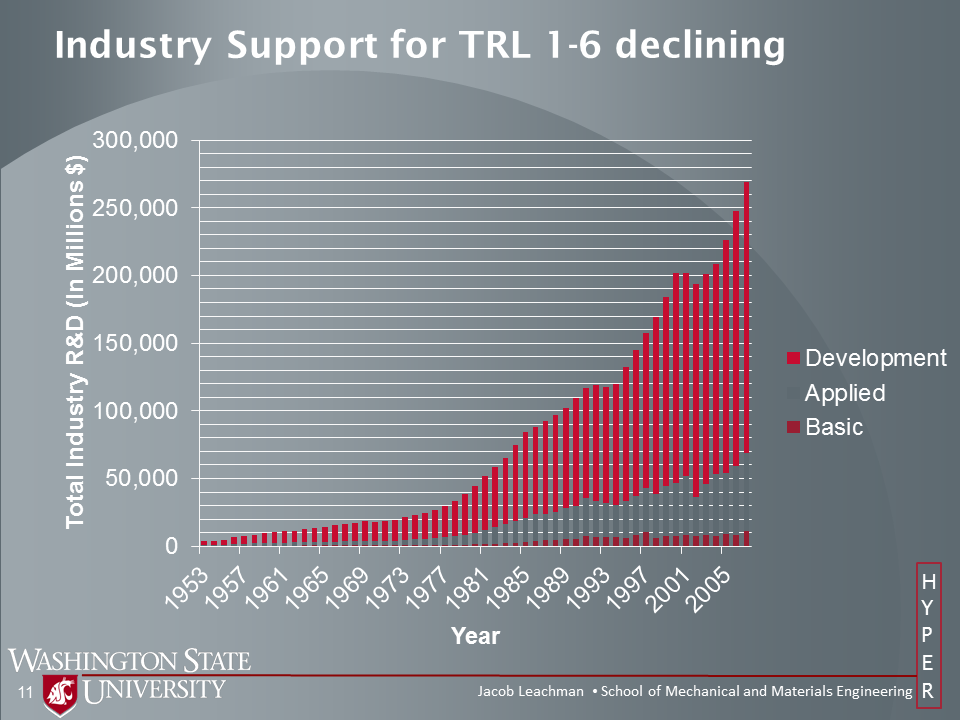 As you can see in the above graph, we’re disproportionately no longer funding basic R&D or applied R&D. That’s fine if physics has already discovered everything there is to discover. I once had a colleague tell me in all seriousness, “everything has already been invented.” It doesn’t take much of a leap to realize the exponentially accelerating pace of new inventions. Let’s see how basic R&D enabled a technology most are familiar with — the ipod or iphone that was supposedly invented by Steve Jobs. 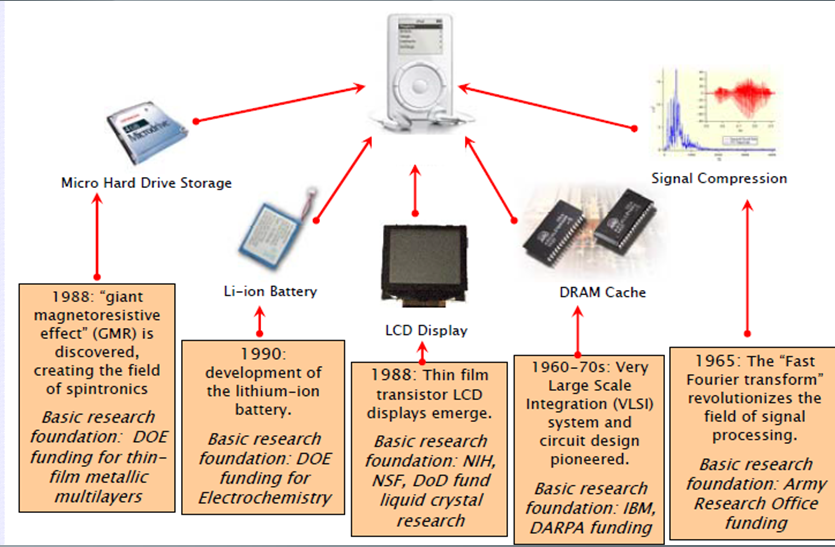 You can see that:

Without basic R&D we’d still be talking into those Bell Lab handsets wired to the wall. By the way, increasing the comfort of telephone switch board operators was what motivated Bell Labs to begin researching the Light Emitting Diode (LED) back in 1960’s. Our world today would be less bright without them. 🙁

Nearly all of the industry supported research labs are gone now (Google, and Amazon are notable reversals to this trend). Universities are trying to pick up the slack. Here’s the break down of university support by source: 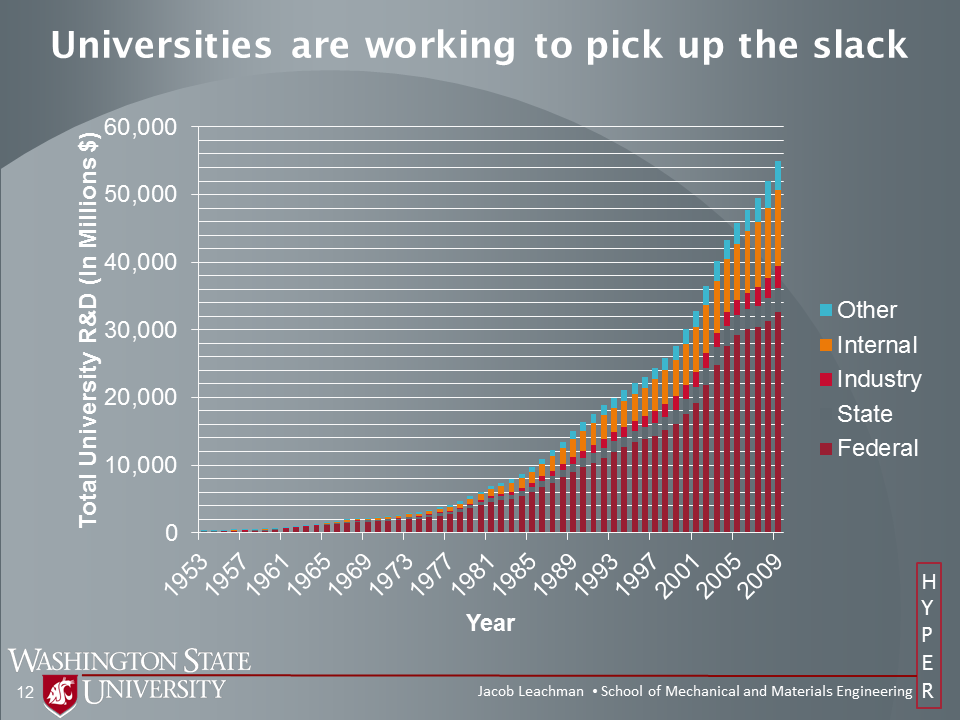 But you can see that nearly all increases have either been Federal, or internal through increasing tuition or alumni donations going to research. That’s an unsustainable bubble that history has shown is prone to collapse. It also means that over the same 40 year time period, the odds of getting a federal grant funded have decreased significantly and are now approaching 1 in 10, just 10%. These grants are being written by the most highly educated, rigorously evaluated, intellectuals on the planet. At roughly 30 pages each, a grant like this can easily take over a month to write. This is likely the biggest waste of human intellectual capital in history. Yet we still have to keep trying. This results in faculty becoming less engaged with their local constituents in the un-relenting pursuit of federal R&D monies, resulting in less confidence in the local constituents in the university mission.

I’ve long believed that if you cannot quantify the return on the investment, then it’s a gamble, not an investment. Some of my friends bring up valid points of whether taxpayer funds should continue to flow into universities for basic R&D if the returns on the investments are so difficulty to quantify. Here’s the thing — nobody would question the value of LEDs in terms of energy savings, cost reductions, or increasing the compactness of product packaging. But if you tried to justify the R&D expense based on the cost to the telephone switchboard operators that LEDs were originally developed for, you’d have a tough time. That’s because we don’t have enough information about the future to know what the future will hold, nor what will be valuable in the future. Thus it is likely impossible to accurately quantify an absolute value on the return for basic R&D investment.

One of my friends in the aerospace industry once told me, “We’ll never have a commercial incentive for sending a probe to Pluto. But that money isn’t dumped into space, every cent of it is spent on earth.” I’m not convinced I entirely agree with this. If we found a platinum or ruthenium rich asteroid that surpassed all known reserves on earth, we could easily end up with a commercial incentive for space. Regardless, their is always a return on the R&D investment in the form of intellectual stock and capital of the workforce, because every cent is spent here on earth.

One of my colleagues takes the Thomas Edison approach — all of the royalties from patents and Intellectual Property returned to him get re-invested in his research laboratory. Edison understood that research is a gamble, “I’ve never failed. I’ve found 10,000 ways that didn’t work.” But not everyone can succeed with such a model and the returns may not come in for decades. So it’s one way. We need many working ways.

Consider Federally Funded Research and Development Centers (FFRDCs), which include the Department of Energy Laboratories. For every dollar spent on research at an FFRDC, they could advance research, and improve the intellectual capital of the professional researcher. Compare this now to academic laboratories, for every dollar spent we could advance research, improve intellectual capital of the faculty member overseeing the research, but we also train students to become the next wave of researchers. So every dollar spent accomplishes both research and training — potentially double the return.

One of my former advisors helped to design the mission for a new research facility that was a joint initiative between a national laboratory and university. He was very proud that for every federal dollar spent on the facility, they leveraged $12 in support from the surrounding communities and businesses. A $12:$1 return.

Nick Diamondis, founder of the X-Prize competitions, once estimated the return on the Ansari X-Prize competition to privately launch a space vehicle and return it to space at a $50:$1 return. Competitions like this have incredible leverage to generate sponsorship funds from businesses and industry with a vested interest in. The financials are so compelling that I consider this to be one potential future of universities and gave a TEDx talk on the topic:

So why haven’t we realized this future? The same reason monopolies stifle innovation in commerce. The big universities have too much to lose to be beaten in direct, public, competition with a lower ranking institution. Competition levels the playing field and leverages 100% effort and takes a community of support networks to sustain.

So the real question should be: how will the US maximize return on taxpayer funds spent on research and development? Another way to ask this question — how do we maximize community involvement in research and development? As said in the TEDx talk, athletics is the most successful model for community engagement ever invented by universities. We need more prize competitions that advance R&D while furthering local efforts and interests. What about prize challenges to understand complex system issues like climate change or plastic waste? President Eisenhower took the approach of threatening to tax corporations if they did not re-invest proceeds into research and development. Competitions that fundamentally threaten entrenched corporate positions in the marketplace will spur engagement and investment in the universities.

The reality is that the US will likely not get it’s act together in terms of maximizing return on R&D investments until we are beaten badly at research and development in a very public way. The event that started big investment in US R&D was Sputnik. Let’s hope that no lives are lost in the next event.