The Bubonic Plague, also known as the Black Death, is generally considered one of the most empathy generating, and wealth redistributing events in human history. Dr. Chuck has a nice article about how this led to the Enlightenment. In a recent post on the Social Thermodynamics of Wealth Distribution, I discussed how Walter Scheidel, a renown author and Professor of History at Stanford University used the Black Death as one of the key examples in his recent book “The Great Leveler: Violence and the History of Inequality from the Stone Age to the Twenty-First Century.” This event is one of a handful in human history where we can readily apply the Social Thermodynamics framework to. The population in Europe is estimated to have decreased by 1/3 and as high as 80% in some cities over a short period of time. Let’s break this down like a simple problem in thermodynamics to see what Social Thermodynamics tells us, and how this relates to what actually happened.

The first step to solving a thermodynamic problem is defining a system of what is being studied. This involves drawing a boundary where you can decide what things flow into and out of a system pertinent to the thermodynamic property balances you are about to apply. The Black Plague makes this system definition much easier. As described in the Journal of Clinical Infectious Diseases, the origins of the word “quarantine” stem from the Italian word quaranta for forty, or the number of days individuals were placed outside city walls in order to limit the spread. So if you had the plague, or died, it’s safe to assume you cross the system boundary of an Italian city wall, which we’ll use to define our system. This is very similar to the classic thermodynamic problem of a tank filled with liquid-vapor mixture that has a valve beginning to vent fluid: 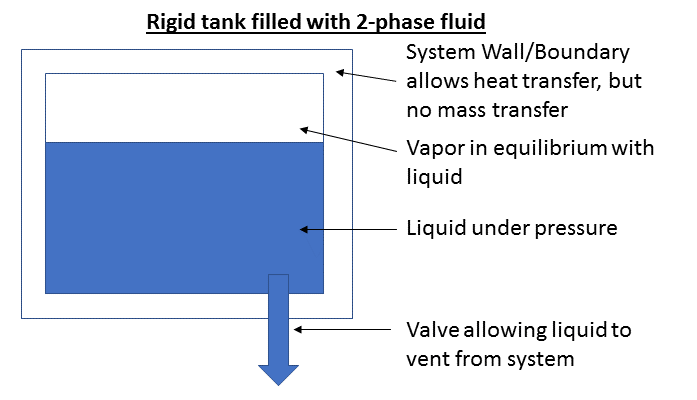 In traditional thermodynamics this system definition is useful for analyzing a propane cylinder on a barbecue, the venting of a can of “dust-off”, or other rigid cylinders containing a fluid (e.g. the USS Thresher sinking). This system is useful for the black plague as it allows us to purge/vent an amount of molecules/mass on equivalent order as the number of people that died during the black plague. These molecules/people never re-enter the system, however information (equivalent to heat) about those purged still crosses the system boundary.

Once you have a clean system definition like this, traditional thermodynamics allows a balancing, or accounting of system properties. I teach that anything in the physical universe can be balanced by: IN + PRODUCED = OUT + DESTROYED + STORED. You’ll want to review the social thermodynamics property definitions here. It is common to conduct three balances on the system:

When I teach thermodynamics I do this demonstration with a can of dustoff in the front of class and a temperature sensor held tight to the cannister by a foam pop-can insulator — works like a charm.

Application of a property model

The last layer in the traditional thermodynamic property solving process is to apply a state equation for the fluid within the tank to provide numerical values for the properties used in our balances. A state equation provides numerical estimates for how the pressure, temperature, enthalpy, internal energy, and entropy are related for the specific fluid we have in the tank. I’ve developed several of these state equations used around the world for hydrogen fluids and mixtures. While we don’t have these state equations or functions yet for social systems, we generally know how the properties behave relative to eachother. In general, internal energy and entropy increase with temperature and pressure and increase dramatically (4-5x) during phase change from a liquid to a vapor. For a case as dramatic as the Black plague, having precise numerical values isn’t necessary, the density drops by half so we can clearly see if the other properties trend accordingly.

By removing 50% of the mass from the system, analogous to losing half of the population during the Black Death, the following are required by this model framework:

After the Black Death swept through Europe, a substantial redistribution of wealth occurred as the noble class required servants, and there were few to go around. To quote an old Metallica song, there’s no point in being “King of nothin’.” Humanity needs humanity. In the review book, “In the Wake of the Plauge: Black Death and the World it Made,” we get the following excerpt:

“It can readily be seen that the Black Death accelerated the decline of serfdom and the rise of a prosperous class of peasants, called yeomen, in the fifteenth century. With “grain rotting in the fields” at the summer harvest of 1349, because of labor shortage, the peasants could press for higher wages and further elimination of servile dues and restrictions.. The improvement in the living standard of many peasant families is demonstrated by the shift from earthenware to metal cooking pans that archaeologists have discovered.”

This redistribution of resources with a suddenly more free populace substantially increased the empathy leading to the Rennaissance and reformation of the value system used in many churches and countries. To prevent the plague from continuing to spread and ravaging populations, we had to share more of our information and best medical practices freely, because they worked, and humanity emerged more connected and empathetic.

Note that we didn’t have the potential to do useful work (spreading of our values) during this traumatic event. We simply ended up generating a lot of entropy. Traditionally, entropy is viewed as a bad thing by those in power and control — it makes things difficult to control. But what really forces us to advance, fundamentally change, and become more connected as a society? Thank entropy and it’s social equivalent in empathy.

Many parallels exist between the Black Death to Rennaissance transition and post World War II US. Many of the epistemiology concepts, and fictional books referenced throughout this book emerged in the 1950’s. Not to mention the space race.