Hydrogen is the simplest atom or molecule; comprising 75% of the known mass of the universe. No atom or molecule has a more fundamental role. So to compliment our post on the Colors of Hydrogen we asked ourselves, what does hydrogen sound like? More specifically, can we develop a fundamental scale of hydrogen tones? And if we’re lucky, this scale will give us a new feel for the complex physical interactions of hydrogen in the universe.

Traditional musical scales are built on ratios. For example, an octave between notes has a ratio of 2:1 for the frequency. At 440 Hz, the pitch produced is A4. An octave above that is A5 at 880 Hz. The ratio comes from dividing the frequency of the higher pitch by the frequency of the lower one. A standard scale is built by dividing each pitch by one original pitch. So, for a scale built on A4, each frequency is divided by 440 Hz. What’s truly fascinating is that these ratios, or at least very similar ones, can be found everywhere in nature. That’s the basis behind the theory of the Music of the Spheres which is the theory that the planets produce noise based on their rotations. Certain flowers such as sunflowers and buttercups show the Golden Ratio in their petals. Some pieces of music are built on the Golden Ratio. Musical intervals, which create a musical scale, are built on Fibonacci ratios. Fibonacci ratios also appear throughout nature.

By breaking down the energy levels of Hydrogen it is possible to find the Fibonacci ratios of a musical scale. By solving the Schrodinger wave equation for the hydrogen molecule, the ro-vibrational frequencies can be directly determined and were tabulated in the following paper:

Statistical Thermodynamics then takes these frequencies to estimate bulk thermophysical properties for the fluid. Statistical thermodynamics was partly developed to explain the existence of two separable forms of hydrogen. Parahydrogen occupies only even rotational energy modes (J=0,2,4…) and orthohydrogen only odd rotational energy modes (J=1,3,5…). These forms intermix in nature to comprise a 3:1 composition of orthohydrogen to parahydrogen at room temperature known as ‘normal hydrogen’.  By taking all of the values of J=2 and dividing them by J=0, it is possible to find ratios that are approximately the same as the traditional tuning ratios inside of parahydrogen. By using J=3 and J=1, it is possible to do the same thing for ortho. By using J=1, J=2, and J=3 divided by a value of J=0, it is possible to do this for hydrogen as a whole as well.

In order to find those exact ratios though, there is a lot of digging that must be done. Hundreds of ro-vibrational combinations are possible for even molecules as simple as hydrogen. By dividing J=1 by J=0 for all of the associated vibrational modes, a pattern begins to form. The ratios slowly increase like they do when building a musical scale! By ignoring the ratios that are lower than one and higher than two, you can obtain the same number of ratios found in a musical scale. By using those and a starting frequency, you can build a musical scale based on hydrogen. The reason that the values less than one can be ignored is because, in a musical scale, anything less than one is pointless. It would produce a lower frequency and be going back in the scale. However, doubling that ratio, and thus making an octave, puts it over one. Each of those ratios would be repeated at some point. For the ratios over two, the opposite thing occurs. The largest ratio in a scale is 2:1. Any larger than that and notes get repeated. Therefore, it was not necessary to include them. To build the HYPER scale, a pattern was found in the ratios as shown in the figure below. Numbers were color coded for clarity and sorted by color within a range. For example, the bright green was for the 1.20-1.29 range of numbers. The average frequencies for each color was used to make the ratios comprising the HYPER lab’s Hydrogen scale. 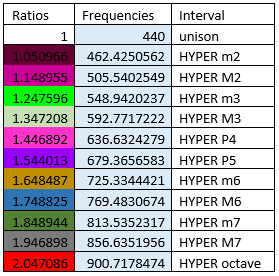 So with these ratios, what can we do? We can do anything that can be done in traditional music. It will just sound slightly different. For example, if 440 Hz is arbitrarily used as the starting pitch and these ratios are used, we can build a chromatic scale. It will just sound slightly different than the typical chromatic scale. The audio files included below are the notes in a HYPER chromatic scale. Listen for yourself to see how it compares. If you listen to 1, 3, 5, 6, 7, 9, 11, and then 12 you will hear a HYPER Major scale. How does it compare to the Do Re Mi Fa Sol La Ti Do that was made famous in The Sound of Music? You can hit play on several to build your own chord.

Now that we have fundamental colors and sounds of hydrogen, we’ll have to see if we can find fundamental rhythms of hydrogen. With this, and help from our Composer in Residence, we’ll work to compose our very own “The Sound of Hydrogen”. In the meantime, here is our version of Happy Birthday: HYPER Birthday.

For something else that may be familiar, here is the four chord progression that is common in pop music. A fifth chord is added that is simply a repeat of the first chord. The progression is then I-V-vi-IV-I.

Since the dawn of time, the arts and the sciences have helped push each other forward. By looking at these connections between the two, we can learn so much more about the world that we live in. These ratios are an example of how the arts and sciences overlap. Math can be found in music. Music can be found in the elements that make up our universe. As the saying goes “Earth without Art is just Eh.”

Update (7/11/2019): This project has continued to be a work in progress. To help demonstrate this tuning system, boomwhackers were constructed based on the ratios. Boomwhackers are a type of percussion instrument. It is a lightweight, hollow, plastic tube. The length of the tube determines the pitch that it produces. It produces a pitch when it is struck against another surface. To demonstrate these, a piece of music was composed. This piece was based on a compositional technique  called 12-tone serialism. In 12-tone serialism, each of the 12 standard notes in western music are assigned a number. Those numbers are then put into an order. The order does not particularly matter. The only rule is that no number can be repeated until all numbers have been used. After this, a 12 by 12 matrix can be constructed. To compose a piece, rows and columns are selected and put into whatever order the composer chooses. Many thanks to Hannah Califano, Breanna Daley, Nick Theriault, Mason Spencer, and Cagney Boisvert for performing this piece. Also, thank you to Dr. Blasco for assisting us in the recording process.