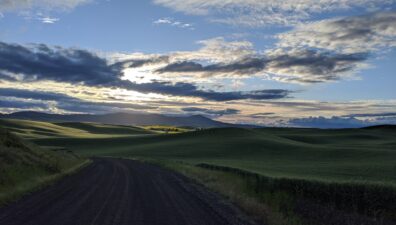 On Labor Day in 2020 a series of fires struck Whitman County in Washington State. Some of the fires were started by agricultural equipment during harvest, and others were sparked by electrical power lines. In a matter of minutes one fire destroyed 80% of the homes in the community of Malden.[i] The 2021 fire season is even worse. We saw conditions through the month of July that are not typically seen until the end of August.[ii] Fire is a known risk during harvest resulting in significant losses to crops, livestock, and communities.[iii] Although fires occur from multiple causes, a study on the most likely points of fire in combine harvesters determined that the engine compartment is the most likely source, accounting for 35% of all incidents.[iv] It is widely accepted that climate change, caused in part by the emissions from those very same engine compartments, is increasing the risk of fires during harvest. To combat this issue the Washington State Legislature recently passed bills banning registration of new gas and diesel vehicles in 2030 and became the second state to implement carbon cap-and-trade legislation to reduce emissions.[v],[vi] These combined conditions have the potential to create economic hardship for farmers on the Palouse and the Inland Northwest. This is an opportunity for technological innovation and hydrogen may be a solution.

Although hydrogen has received relatively little attention in the US over the last decade, this is not the case around the world. In Europe, there is currently a big push for renewable energy systems and technologies. For many, hydrogen is playing a pivotal role. New Holland Agriculture, headquartered in Italy, has built two hybrid electric tractors, powered by hydrogen and lithium-ion batteries. When the primary energy converter of this tractor was a hydrogen fuel cell, the power efficiency was 50%, compared to the 32% maximum efficiency of a diesel engine.[vii]

So why is there no hydrogen in agriculture in the Pacific Northwest? The two challenges hydrogen faces are public investment in infrastructure and safety perceptions. Without infrastructure, it is difficult to get investment and vice versa. However, bleak the situation is, it is beginning to change. The Douglas County Public Utility District recently commissioned a 5 MW Cummins hydrogen electrolyzer system to produce hydrogen from the Wells dam on the Columbia River.[viii] Washington State Senator Brad Hawkins, who is the elected representative of the district, recently described a vision where the hydrogen produced by the electrolyzer could be used for agricultural harvest.[ix] With the Northwest’s large agriculture industry, renewable energy output, and technology hubs, it is the perfect place to demonstrate a hydrogen fueled farm of the future.

What would a hydrogen farming future look like? Farms could generate their electricity to produce hydrogen. The hydrogen could then be used as fuel for equipment and to make fertilizer(NH3). Farm equipment like trucks, tractors, and combines could all be powered by hydrogen. These machines would produce water vapor as the only emissions, avoiding the impacts of carbon legislation and potentially allowing farms to become net carbon negative. Hydrogen machines also have a benefit from electric motors, instant power. A gas or diesel engine takes time after hitting the accelerator prior to reaching peak torque and horsepower. Electric motors have nearly zero power delay when the accelerator is hit, and they also are at maximum torque and horsepower at zero RPM or from a complete stop. Due to hydrogen’s low mass, the machines could also have more fuel onboard, resulting in longer runtimes between refueling, with the same refueling time as a gas or diesel engine, something not achievable with batteries. Hydrogen can also be used to produce the ammonia fertilizer needed by farms. If the fertilizer is locally produced, it will cut down on the transportation needs and reduce carbon emissions, both of which would cut down on fertilizer costs. With the amount of solar and wind energy available in the region, farms could produce the electricity needed to make their hydrogen to fuel all the equipment and produce all the fertilizer needed. This self-sustaining model would cut long-term costs from the fuel consumption and fertilizer purchased while resulting in more energy independence. The future of farming looks bright, but is it plausible? Can this be done?

To begin to assess the feasibility of a hydrogen fueled farm for the future we considered a case study typical of the Palouse: a family farm of 2800 acres including wheat, barley, legumes, and canola, all of which are dryland crops. This farm has two combines, three tractors, and four trucks consuming approximately 10,000-15,000 gallons of diesel per year and purchases it with a fuel agreement for $1.5-$2.0 per gallon. With this consumption and cost, the farm ends up spending $15,000-$30,000 each year on fuel alone. This farm also consumes about 175,000 lbs. of NH3 fertilizer each year at a cost of approximately $0.6 per lb[x]. for a total of $105,000 per year. This brings the combined annual cost of fuel and fertilizer to $120,000-$135,000.

What would this farm need to do to convert to hydrogen fuel? The farm first needs a source of renewable energy to couple with an electrolyzer that uses electricity to produce hydrogen from water. A kilogram of hydrogen has roughly the same energy as a gallon of diesel or a gallon of gasoline to start. The current conversion efficiency for an electrolyzer is 55.5 kWh of electricity to produce 1 kg of hydrogen, which has roughly the same energy as a gallon of diesel. The conversion of hydrogen to electricity is around 60% (and climbing), and electric motors run at about 95% efficiency. In the end, a hydrogen fuel cell machine would run at approximately 57% efficiency. That may not sound high, but diesel engines run at a peak efficiency of 45%, so hydrogen is at least 12% more efficient in the end. This would put the need for hydrogen fuel for our model farm near 7,900-12,000 kg per year for fuel. For the NH3 fertilizer, hydrogen makes up about 17.8% of the mass, so the farm would need an additional 14,100 kg of hydrogen per year to produce fertilizer. This would bring the total hydrogen required by the farm to 22,000-26,000 kg per year. What would this amount of hydrogen cost to produce? Hydrogen takes 55.5 kWh to produce a kg. This would mean it would take 1.2-1.4 GWh to produce the hydrogen needed for the year. With a cost of electricity being $0.0413 per kWh[xi] (industrial), the total electric cost to produce the hydrogen is $50,000-$60,000, excluding the effect of carbon legislation that will be implemented. This brings the cost down by $70,000 per year. The most significant factor in this cost is the price of electricity. So, what would these figures look like if the farm produced its own electricity? Our model farm has a barn roof with 300 square meters of space. This size of roof would allow for a solar array of 45 kW[xii]. Depending on the type of solar panel, the array would see either 3.9, 5.3, or 6.9 hours of sun each day on the Palouse[xiii]. This would mean the roof could produce 64,000-113,000 kWh per year. This is approximately 1000x lower than what would be required, but would save $2,500-$5,000 each year. If the farm could dedicate 1 acre out of 2800 farmed for electricity production, the story would be different. The array would shoot up to 4300 square meters, which would be able to produce 0.92-1.62 GWh per year. This could save the farm $38,000-$67,000 in a year, which can be up to $17,000 more than the original cost without hydrogen, so they could even sell excess electricity and make a profit. However, this is all based on solar energy for electricity generation. Wind power is another alternative that is very popular in the northwest. The average annual wind speed for this region is 6.85 mph.[xiv] To generate half of the electricity needs using wind and the other half using solar energy we will need 25 wind turbines with a blade diameter of 75 feet.[xv]

Although these numbers are approximations that omit several factors like capex and packing costs our point with this post was to show that the numbers are getting close enough that a more careful analysis should be done. Please let us know if you are interested in participating! There are many possibilities here. It seems like a hydrogen farm can be cost-competitive to a traditional one using current technologies. Although there is a needed initial investment in technologies, the model farm runs cheaper regardless of the electricity production method. Over time, the investment in hydrogen and electricity technologies will pay for themselves. The machines using hydrogen fuel would not need to be a significant expenditure either. The new machines could be phased in as the old ones need to be replaced, which can be up to 20 years for machines newly purchased. This could allow every machine using diesel to be phased out for new hydrogen technologies by 2041. Although there are not many hydrogen machines on the market now, there will be much more in 9 years; all diesel machines could be phased out by the U.S.’s 2050 carbon-neutral goal. Not every farm is the same or has the same needs. Purchasing electricity produced locally is the better option for some; making their own is better for others. Farms come in far smaller and larger than our 2800-acre model. They farm different crops, use irrigation, and some are orchards, requiring different machinery and techniques entirely. The hydrogen fueled farm is close enough to reality that it is likely time for a demonstration farm to be implemented. While not in time to reduce the fire risks at the next harvest, we can at least start down the road towards a future where we have minimized that risk as much as possible. One thing is for sure, there is a future for hydrogen in farming, and it is self-sustaining.

[ix] Senator Brad Hawkins during the CHARGE inaugural conference on May 18th 2021.